Colorado football has reached an unbelievable new low with their fifth straight blow out loss.

Share All sharing options for: Buffaloes Stay At Rock Bottom, Fall To Stanford 48-0

If something happens five straight times is it a trend? Because the trend around Boulder is humiliating, embarrassing defeats over and over and over again. The Colorado Buffaloes were run off the field for the fifth game in a row as the Stanford Cardinal came into Boulder and waxed the floor with the Buffaloes, 48-0.

This one is the worst. Even in the historical losses to Oregon and USC there were plenty of positives to be found. Those were two of the top teams in the nation with athletes all over the field and talent on the sidelines that are just way ahead of these Buffs. There are no positives here. Colorado hasn't been shut out at home since 1986. In a season like this, we need to get out an eraser and just start to rewrite the record books, because a lot of Colorado's "worst" records are going to change.

Take a look at these numbers.

That's right. Colorado finished the game with 76 yards. 76 YARDS. The Buffaloes gave up 436 yards to an average to bad Stanford offense. This was at home. It didn't matter which quarterback Jon Embree shuffled in or shuffled out, there are so many issues on offense that it wouldn't have mattered. None of these quarterbacks are ready to lead this team anywhere.

All year I have been adamant that under no circumstances should Jon Embree and this staff be fired. That opinion has changed. I haven't seen anything that leads me to believe that improvement is coming, and that's all that I've asked for out of this season.

The Buffaloes have hit rock bottom, purchased furniture, and plan on staying awhile. 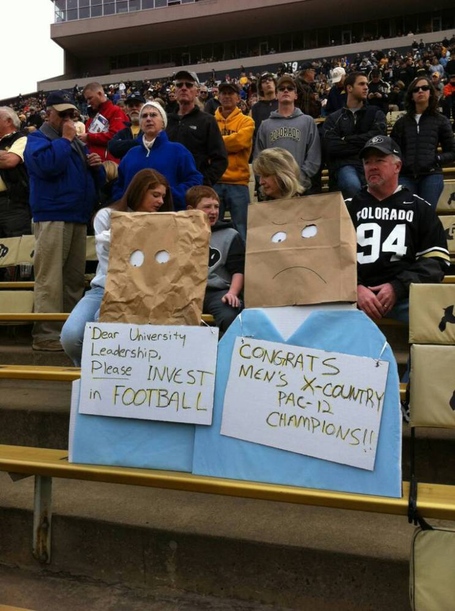