For the first time in over 20 years, the CU Buffs have captured the trophy.

The year was 1993. Snow's Informer was at the top of the charts, Jurassic Park owned the box office, and Colorado was good at football. My youngest brother was a tiny, annoying, colicky baby who would only shut up his crying when I bounced him gently against my chest and showed him his dumb face in the mirror, but it was okay because it gave me time to swoon over his gorgeous nanny. Wait, what where we talking about? Oh yeah - 1993. 1993 was the last time that your Colorado Buffaloes won a conference title in men's lacrosse. Fast forward to 2014 and that baby is 6'4" and on the team, but still annoying. That song and movie are still amazing, but I'm not as attractive, I don't wear Z Cavaricci jean shorts any longer, but I can drive and buy alcohol and finally, once again, your Colorado Buffaloes have captured the conference championship. Think of everything that has happened to you in that time span. Some of you will likely say, "being born."

While scoring was spread around judiciously, the offense fell on the back of Riley Seidel and the defense on goalie Mitch Fenton. Jace Gan played perhaps his best half of the season in the opening stanza against BYU, and close defender Rowan The Smasher contributed a goal to help close out the game (Long Poles Rule). Clark Salamie, fighting off a knee injury, was a steady hand on the face off.

I've been saying for a while that this is a special team, and it is. Jack Cranston, Riley Seidel, Christian Wilson, and Connor Ervin all captured first team all conference honors. Rowan Sloss, Greg Kelsic, Tyler Dougherty, and Hayden McClain were second team, Mitch Fenton, Clark Salamie, Jace Gan third team, and Ryan Stoll was an honorable mention. Those honors are all well deserved, but this team is greater than the sum of it's parts. 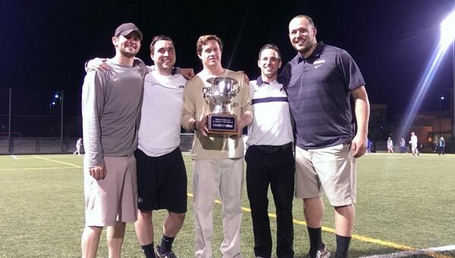 I guess that speaks to Coach Of The Year John Galvin and his assistants Marty Taffet, Ben Weisz, Aaron Gray, and Markus McCaine. The offense is at its best when players make the extra pass instead of playing hero ball, the defense when they're playing zone and trusting each other, and in transition when... well they're just better conditioned than their opponents. It is easy to see the time spent in the weight room and on the track translated onto the field. This is a special team.

But it's not over- in fact we've just begun. We've got four games left, in the MCLA National Championships in beautiful Orange County, CA, starting on May 12th. Plenty of highly ranked teams potentially stand in the way, including top ranked Arizona State and potential 2nd round opponent Michigan State, who have both previously defeated the Red Hot Buffs. But the team is ready, willing, and anxious. Aren't you? Next year's team will not look like this year's team. We're graduating our entire first line attack and (potentially) many other high level contributors. Undoubtedly, others will step up into the breach, but that team is not this team, and next year is not this year. There is no next year. This is our year. The ultimate goal is in sight. Respect the process, and...

Jake Taylor: Well then I guess there's only one thing left to do. Roger Dorn: What's that? Jake Taylor: Win the whole fucking thing.