Looking Back at CSU and Looking Forward to CAU

Share All sharing options for: Looking Back at CSU and Looking Forward to CAU

It sure feels great to get a win. I don't know about you, but I feel like I've come out a of a long football coma. Last year's win felt like more of a relief than actual joy, but I can honestly say that watching that first Wood to Richardson pass brought a genuine tear to my eye. But let's not get carried away. There were things that I liked and things that I didn't. We'll start with the things that I didn't so hopefully you forget about them by the end.

And now the things that I did like:
So here we are, one win down, and hopefully many more to go. Let's be honest, this wasn't a perfect performance against what's likely to be a poor opponent. We can and will improve, and we'll need to to compete with the vastly superior competition that awaits us in the conference slate. But there's something quite comforting about knowing you didn't play your best game and still got the win (hint- it's the win. The something is the win). So now it's time to move on to...
The Directional Hillbilly University Sugar Bears! Frankly, I know nothing about Central Arkansas. I know they play on this horrible sensory abomination of a field: 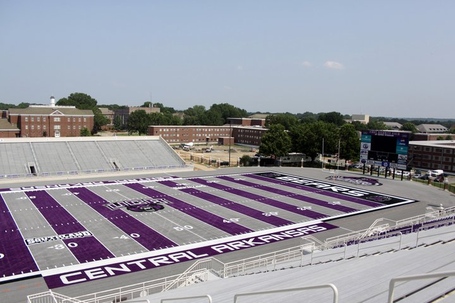 I know their quarterback is called Wynrick Smothers, which sounds like a character from Willow, or Harry Potter. Or a Hobbit. Really any popular fantasy franchise. Also, they laid a beating on something called The University of the Incarnate Word, which might very possibly be a seminary. Finally, I'm guessing that their mascot is either this guy or this guy, both of whom would seem to be most intimidating via diabetes, which is truly terrifying indeed. Analysis! But honestly, this game terrifies me, mostly because I've seem too many years of Colorado football crap the bed. We're favored by 16, which really should not be a thing. But I've got faith, for the first time in a long while, that our coaching staff will have the team prepared to play, and hopefully the crowd will respond in kind. Let's go out and double our win total, you guys. What do you think? Let us know, in the comments!