This weekend, the prodigal part of the Ralphie Report returned from the land of sand, sin, and silicone to take in the game that annually causes Colorado fans to wring their hands and clutch their pearls and find their fainting couches to faint upon and THIS SERIES SHOULD NOT BE while Colorado State fans and their perennial Napoleon Complex puff out their chests with a false bravado not unlike a recent divorcee who buys either a sports car or plastic surgery. There is the month of build up, all of which inevitably amounts to “a tale  told by an idiot, full of sound and fury, signifying nothing.” It is, of course, the Rocky Mountain Showdown…

... and it was depressing as hell. I've been on many a road trip following various iterations of Buffs in various sports, and this was the first time where I made the conscious decision to wear nary an item of clothing bearing the CU logo on the way home. It's not that I was ashamed of being a Buffalo - I'm not, and I never will be. I just wanted to be left alone. I didn't want to feel the looks of derision, or commiseration, or sympathy. Just let me be. And I realized while sitting in the airport bar for an exceedingly long time (thanks, broken airplane!) why I haven't really minded the late game time slot: losing early makes watching college football the rest of the weekend that much more depressing. Why can't we have nice things? Western Kentucky scored 59 points and threw for 569 yards. Western Kentucky! It's just hard to enjoy and appreciate the skill and athleticism of some other teams and players when you are on the outside looking in. And as of right now, we are. Which is my amazing segue to the actual playing of the game...

The biggest thing I took away was the atmosphere in the stadium. We were right at the 50 yard line, and the CSU fans were more vocal by far. BY FAR. It wasn't even close. I don't care what the ticket distribution was - CSU absolutely dominated the fan experience.

I've always felt like MacIntyre was selling us a bill of goods by saying that he needed to recruit these undersized speedy guys because we play mostly spread teams, and after one game, I can't possibly think any differently. 270 LB DTs, 235 LB DEs, and 210 LB LBs will not hold up physically, regardless of scheme. Spread teams still have 300 LB offensive lines. The defense simply wore down over the course of the game, which resulted in 17 points in the 4th quarter. They were running roughshod through our defense. I can't think of another way to say it. There's a saying that goes, "if you have 2 quarterbacks, then you probably don't have one." That can be workshopped a little to apply here - if you don't know whether you've got a linebacker or a safety, then you probably don't have either.

The play calling was milquetoast at best on both sides. I saw 2 blitzes, both of which resulted in runs to the opposite side. Beyond that, there were no stunts, no twists, no anything designed to get pass rushers into the backfield. Just 4 guys rushing straight ahead and largely getting stoned from an extremely green offensive line. The same offensive line that was blowing our defensive line off the ball as the game played on. I didn't see any rhyme or reason for the play calls or personnel changes. Woody Greer and John Walker seemed to alternate plays regardless of the down and distance.

Similarly, there was no real identity on offense, the scheme for which could best be described as "Death By A Thousand Wide Receiver Screens" and pointless inside handoffs out of the spread. Too many play calls were just give ups. The play calling was callow on both sides, and that's no fun for anyone.

The biggest thing I was looking forward to after watching the San Jose State offense was players motioning into and out of the backfield to create mismatches and confusion. I thought we had those options with guys like Goodson, Lee, MacIntyre, Ross, and Jones, who have the skill set to do a little bit of everything but are kind of positionless due to size. I'll just say that I thought that would be a weapon in scheming. We haven't seen that for 12 + 1 games. In fact, I don't see any creativity whatsoever, and that stinks.

That's not to say that there weren't any positives. First and foremost, I think we can put to rest any inclination that Nelson Spruce is not a playmaker (whatever that means, really), or that without Richardson lining up opposite him he wouldn't be able to get open. He's always had sure hands, but the one handed touchdown catch was extraordinary, and he is clearly capable of being a number one receiver.

Right now, I'm not as high on Shay Fields as some I've seen on (shudder) message boards. Sure, he caught 8 passes, but probably 5 or 6 of them were behind the line of scrimmage. He would then barrel forward through a defender or 3 and end up with a five yard gain. A sub 6 yard YPC average is not what you're looking for from a player as dynamic as Fields, and the true freshman won't hold up for the season if he's taking those kinds of beatings week in and week out. But he did make his catches and appears to be both elusive in traffic and tough as nails. I'd like to see some slants thrown into his arsenal to see what he can really do with the ball in space.

Sefo Liufau looked solidly improved to me, even with that weird delivery. Call it anecdotal, but the TD pass to Spruce showed an improved deep ball, and he clearly showed that he's a better athlete than many of the (shudder) message board denizens have given him credit for. Sure, he's not ever going to be Seffy Football, but he's also not Ryan Mallet. He can make defenses pay when a play breaks down and he's got to run for the sticks.

Darragh O'Neill looked exceptional. He's always been solid (did you know he can kick with both feet?), but he was an actual weapon last Friday. 4 of his 6 kicks ended up inside the 20, and his only touch back landed about 3 inches into the end zone. He's also now CU's all time leader in punts, which, um, probably isn't the greatest record to hold.

But the bottom line is that we lost. Losing is no fun, especially when you've got to hear about it from the guy who washes your car for the next year.

None of this really change the dynamic of the CU/CSU relationship. CU's argument is always that this is CSU's Super Bowl, and they only get up for this game, while our fans are apathetic at best toward the game. For this week, it didn't matter. We didn't lose because of energy - we lost because CSU drove the ball down our throats late in the game. CSU was the better team. That is not an argument.

But we're still getting $20 million a year and playing in front of 50+k fans, and CSU is playing in a terrible crumbling gravel pit and begging for change to run their athletic department. By any metric, our program will always have a higher ceiling, even if it comes with the caveat that we might also have a lower floor. Any Hot Sports Take to the contrary is a fool's errand, and probably from the Coloradoan. But of course we're still struggling to pick ourselves up off of that floor, and it is a slow and often frustrating task.

At any rate, setting aside the game result, the trip was successful, albeit ungodly expensive. The weather was good, the food grand, the company delightful, and the friendship bracelets flowing like mead. If you are inclined to spend excessive amounts of disposable income, I cannot recommend The Nickel inside Hotel Teatro highly enough. 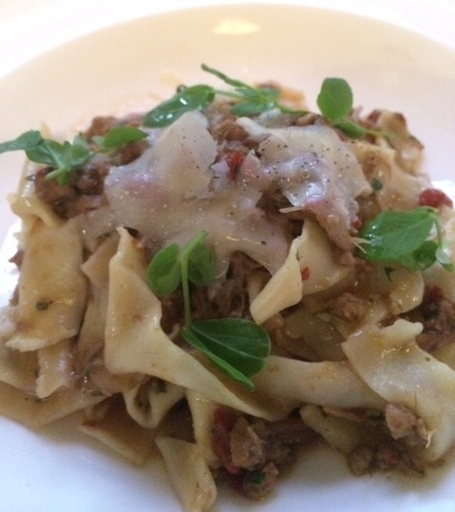 I had the lamb sugo (CSU game!). And the complimentary charcuterie plate. And the corn and crab bisque. And the malasadas. Thanks as always to everyone who came out for lunch or welcomed me to their tailgate. Thanks especially to @rumblinbuffalo for procuring cheap tickets and @jennberg for gifting us significantly better tickets, which meant that I didn't have to and we didn't have to sneak downstairs, respectively. Unthanks to Southwest Airlines for having a broken plane and an idiotic gate set up. For now it's on to the next one, UMASS, a land so far away that it's the second star to the right and straight on 'til morning (at least I think that's what MacIntyre said). Godspeed and Go Buffs.