Colorado Men's Basketball Has Sold Out of Season Tickets

We did it you guys! We are officially a Basketball School, as conferred by the National Committee To Confer Upon Schools What Kind of School They Are (they’re working on a better name). In addition to basketball, we are a Skiing School and a Distance Running School and a Learning School when we can be bothered with such a thing. Thanks, committee!

If you buy something from an SB Nation link, Vox Media may earn a commission. See our ethics statement.

Share All sharing options for: Colorado Men's Basketball Has Sold Out of Season Tickets

This designation was awarded to us upon the news that CU has sold out of season tickets for the 2013-2014 season. (Regular tickets, not student tickets. You can still buy those, assuming you are a student. Although if you haven't already, you probably aren't going to, because what the heck is taking so long?).

Although the total number is not known (by me), the general consensus is that there's roughly 6,500-7,000 season tickets, and another 2,500 or so student tickets. The Coors Event Center seats 11,064, which leaves you with around 1,500 seats to play with on a per game basis. And the selling of those tickets has begun in earnest. Season ticket holders were afforded the ability to purchase additional tickets today, and Buff Club members can do likewise tomorrow. There's another wave of pre-sale offers going out on Monday, for subscribers to a mailing list of some sort. And finally to the general public on Tuesday.

Well, the selling has begun with two prime exceptions - Kansas, and Arizona. Those tickets are being held back and offered to donors based on their amassed priority points. According to the science I just did, there is a zero percent chance these ever see the public eye. That is very good news for most people. Jayhawks and their stupid moron nonsense chant won't be in abundance at the Keg, and neither will Wildcats with their, um... whatever they do. Based on some other science I just did, I can unequivocally state that Less Red and Blue > More Red and Blue. But it is also very bad news for a number of people. And that number is one.

Me. Phil. I am the person. As a man of modest means and moderate connections among the CU fan base, I was under the impression that all tickets would be released to the pre-sale at the same time, and a few gracious souls offered to help me out for the Kansas game. With that in mind I happily bought a ticket to Colorado and waited... and then we got the curve ball. So I am currently without ticket, and left with the less than desirable options of purchasing via the secondary market at an obscene rate, coming to Boulder to enjoy the atmosphere and watch the game at the Dark Horse, or eating the tickets. In hind sight, this does not seem to be a wise decision on my part. Perhaps I'll just dust off the ol' transcripts and see if I can enroll in a class. At any rate, if you know of anyone looking to do a brother a solid, let me know! #LetPhilBuyKansasTickets

Whatever blah blah blah shut up Phil. Fine. Here is a picture of Xavier Johnson doing a dunk on one of our new schedule posters, courtesy of our Graphic Design Overlord, Emily Simpson: 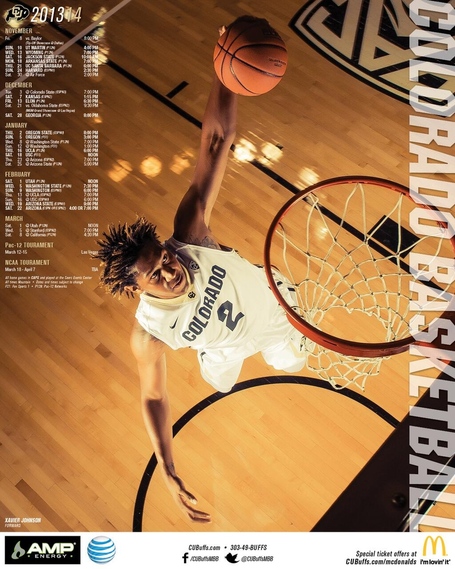