When we last left you, the 80's were over and mighty CU wasn't all that mighty. Basketball was sort of going in the opposite direction from football, as we endured 6 straight losing seasons and a few coaching changes. But, new Head Coach Joe Harrington came aboard to start the 90's, so let's check out what happened in pocket schedule form! 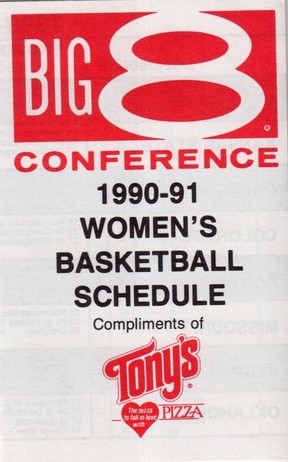 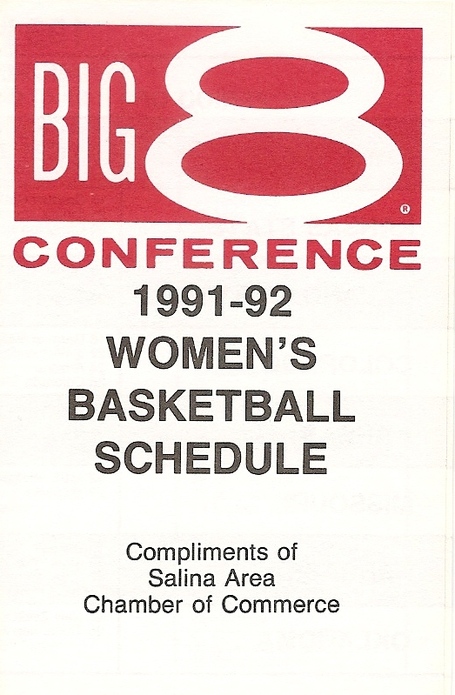 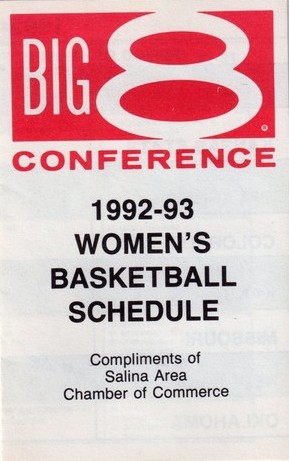 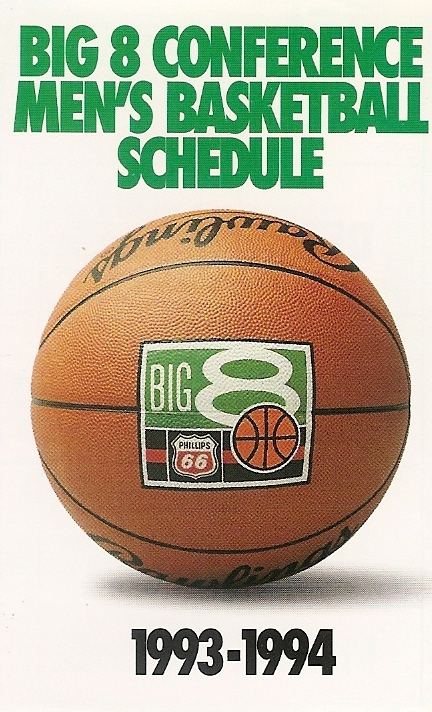 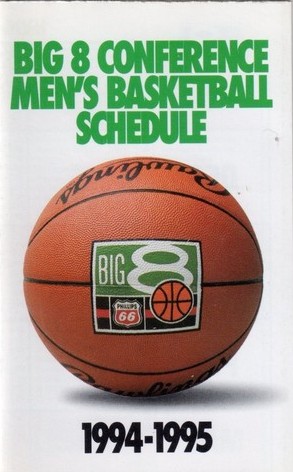 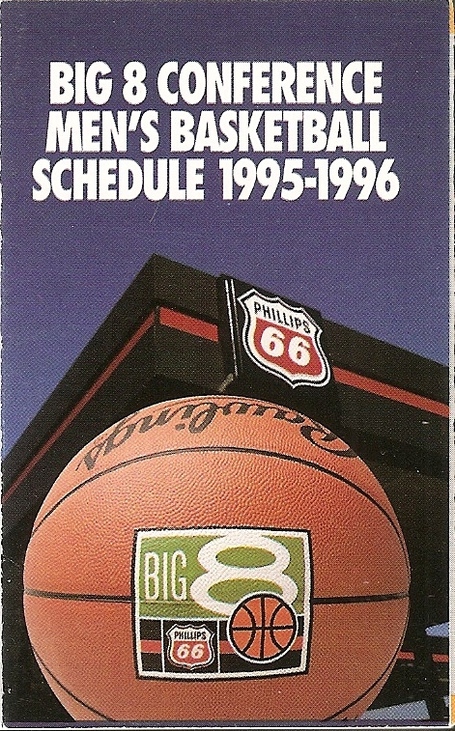 1990-91: With a 19-14 record (best in 21 seasons), lots of accomplishments were made in Coach Harrington's first season on the Buffaloes Bench. We snapped a 56-game regular-season road-losing streak in league play (thanks, Iowa State), we won our last game of the season (for the first time in 16 seasons) while ending a 22-year postseason drought, by earning 3rd place in the NIT! 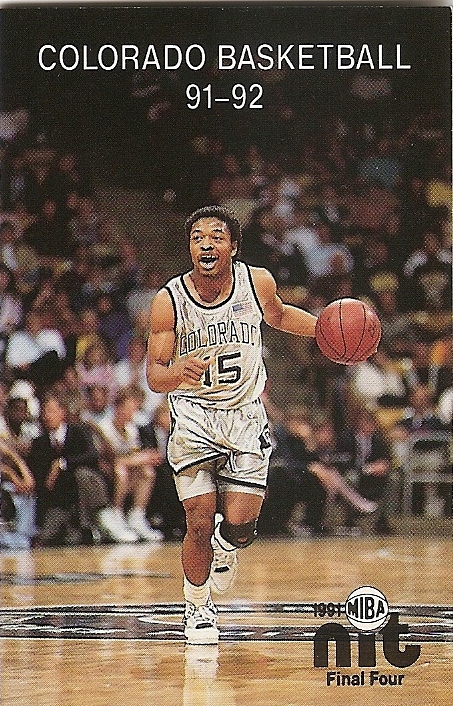 1991-92: Senior Billy Law, who lead the team in minutes played and assists (5.4) per game, looks mighty sharp in silver. Notice the NIT Final Four Logo, too. Though the team could only muster a 13-15 mark, we beat 3 ranked teams, including #2 Oklahoma State at the time. Also, Freshman Donnie Boyce made an instant impact by scoring 21 points in his first game and leading the team in scoring for the season at 14.9. How cool is it that we had one of the "Three Amigos" in Boulder? http://www.pjstar.com/state/x1831799739/Return-of-The-Three-Amigos 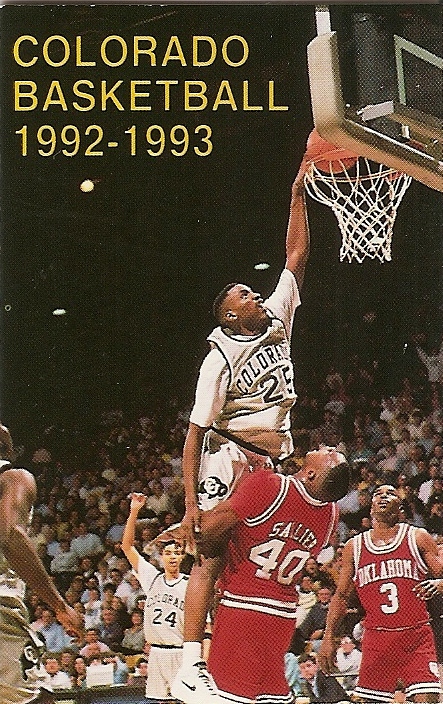 1992-93: Randy Robinson! Just say that name in your head a few times and imagine Alan Cass shouting it over a packed crowd. Well, the Senior swingman did his part averaging 15.2 points per game and 4.7 rebounds, but a winless road record (0-10) doomed this team as the Buffs finished 10-17. We did rollup Centenary for 117 points at home in non-conference play. 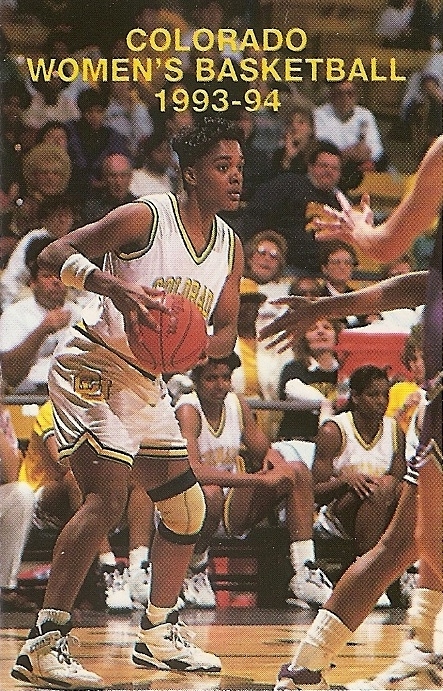 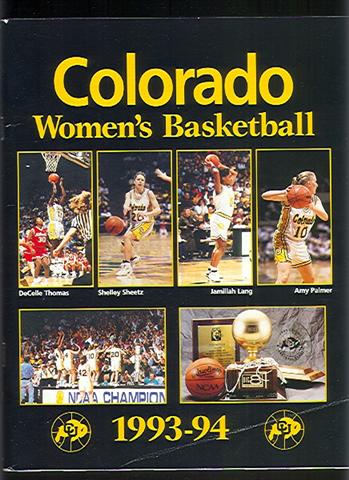 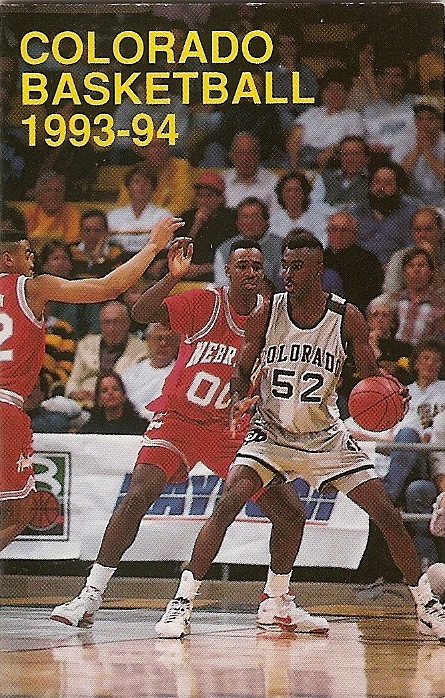 1993-94: It was Mark Dean's turn to play second Fiddle to Boyce, as the Senior big man tallied 15.5 points and 9.5 rebounds per game. Another tough year, despite some great individual accolades put the season record at 10-17. To cheer everyone up, Donnie Boyce earned All-Big Eight 1st team for the 2nd straight season, scored a school record 31 points in one half in a March game against Oklahoma State (finished with 46) and had his best overall season in the Gold, Black AND Silver with 22.4 points, 6.7 rebounds and 4.5 assists per game. 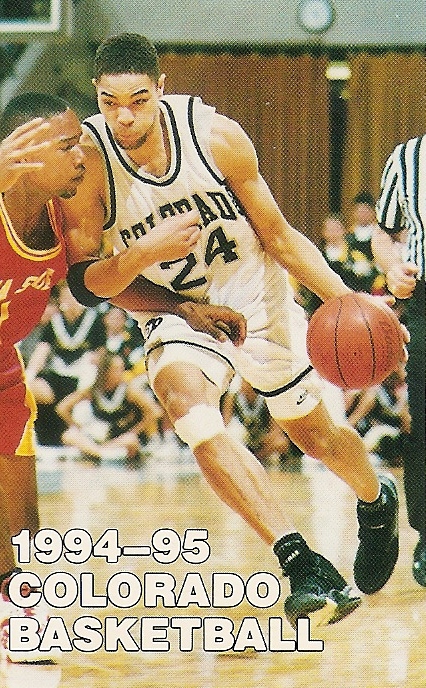 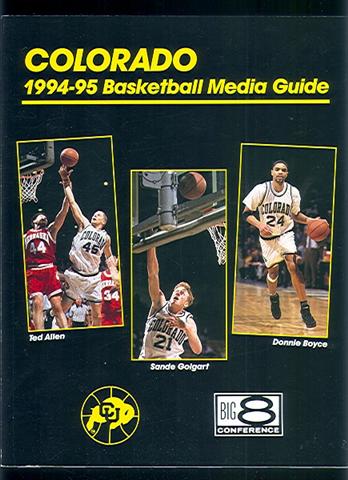 1994-95: Finally our cover boy, Senior Donnie Boyce, who ended the year as CU's all-time leading scorer at 1,995 points. This was a record that stood for 13 years. Not to overdo it on Boyce, but who knows if his record would have still stood today as a broken leg against Oklahoma in the first half of Colorado's first round Big Eight tournament game ended his college career and completely changed the course of his NBA future. He only ended up playing in 30 games for the Atlanta Hawks, before having stints in the CBA, Europe and South America. It's wonderful to see the success he is having now as a high school head coach at his alma mater. Proviso East, last year's Illinois state champion runner up, should easily make it downstate again this season. We even took a look at one of his star players, Sterling Brown, (Shannon's younger brother), before locking up our 2013 recruits. Brown will take his talents to SMU next season. I'm unabashed in saying not only is Donnie Boyce my favorite CU basketball player of all time, I believe he is the greatest.

1995-96: Chauncey arrives as does Ricardo Patton...sort of. Head Coach Joe Harrington resigns midseason as Patton took over in an interim role. Although, only going 4- 9 under Patton, in March he became our 16th head coach in 93 seasons. A brutal season nonetheless at 9-18, Billups not only had the school's first ever triple-double and only 6th ever in Big Eight history, but he notched 31 points in his second game, a freshman record that still stands. http://news.google.com/newspapers?nid=2199&dat=19960117&id=aNYzAAAAIBAJ&sjid=Y-kFAAAAIBAJ&pg=5276,394917 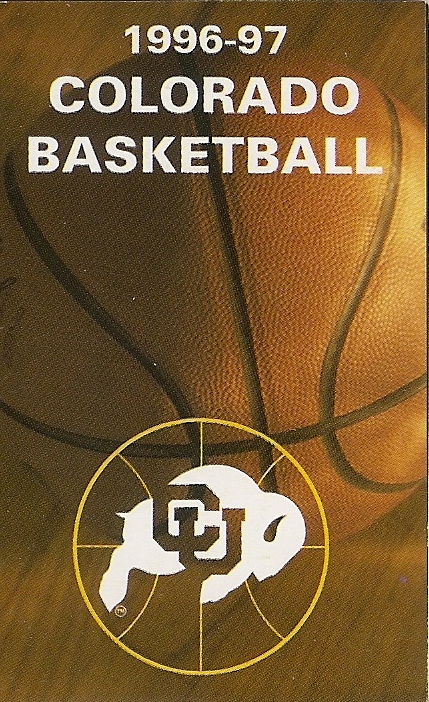 1996-97: Just a basketball and a logo? Ehhhh. Guess no one saw this coming... A 13 win turnaround, only the second CU team to win 20 games, a 12-1 home record, our first NCAA Tournament appearance since 1969, a first round win over Indiana in which Bob Knight was so upset that he walked back to the team hotel from the stadium and the Big Eight became the Big XII (Thanks, Texas and friends). This was a terrific season by all accounts, eerily similar in many aspects to last year with CU moving to a new conference (Pac-12), surprising the experts with regular season success and not only making the NCAA Tournament for the first time, in a long time, but actually winning a game and advancing to the Round of 32. Though Chauncey left after only 2 seasons, his impact is still felt with the program and it is easy to say that he has been the most successful Buff in NBA history. 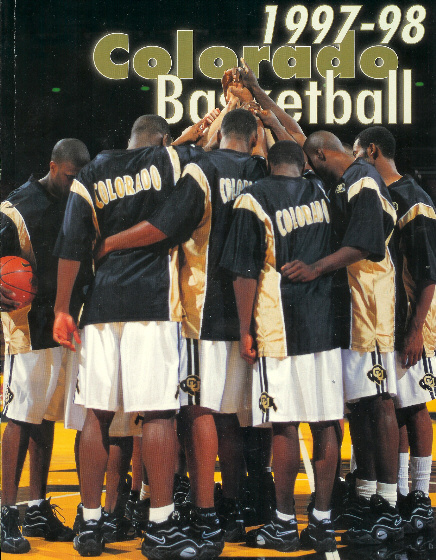 1997-98: The season before I arrived in Boulder, saw many stumbles as Patton's crew fell a little short at 13-14. Kenny Price, the Junior transfer sharpshooter, led the way, but he didn't have much help. He was named Big XII newcomer of the year, but it wasn't nearly enough as we ended the season losing 5 of our last 6 games. I guess that did not detract me from applying, visiting and accepting an invitation to become a student, and I'm sure glad I did. 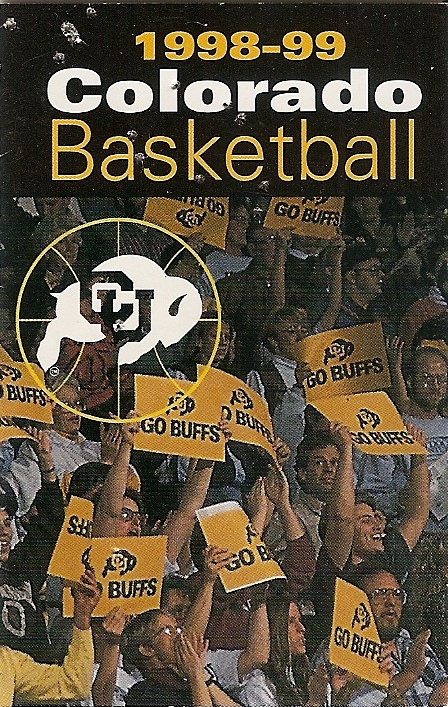 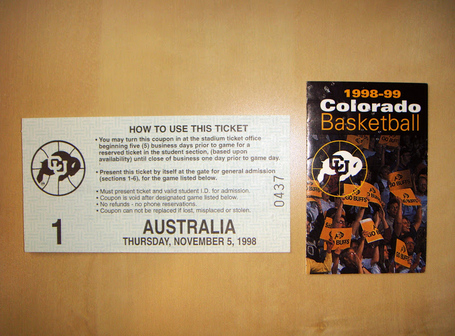 1998-99: I'm here and so is my first Colorado pocket schedule with countless pin holes to prove it. I had a clipboard in my dorm at Libby Hall and must have taken that schedule down and looked at when the next game was and then reattached it about a dozen times. Attending sporting events was a huge part of my college experience and now is a great link to keep me coming back and meeting with fellow alums in Boulder and various other college towns. My first game attended was an exhibition against Australia. Still have the ticket stub, obviously. As for the overall season, we had Buffs Madness, we had a winning record and we made the NIT. 2 post season tournaments in Patton's first 3 seasons. Not bad at all. Price was the man, hitting 9 3-pointers (school record) in a Big XII tournament game, as 5 players scored in double figures that season. I had no idea that I was enrolled at a football and basketball school. I mean during my years as a student, we never had a losing season. Patton actually lead the Buffs to winning campaigns in 6 (One year we were 15-15) of his first 8 seasons, including 6 straight non-losing, starting with my freshman year. Pretty damn good. 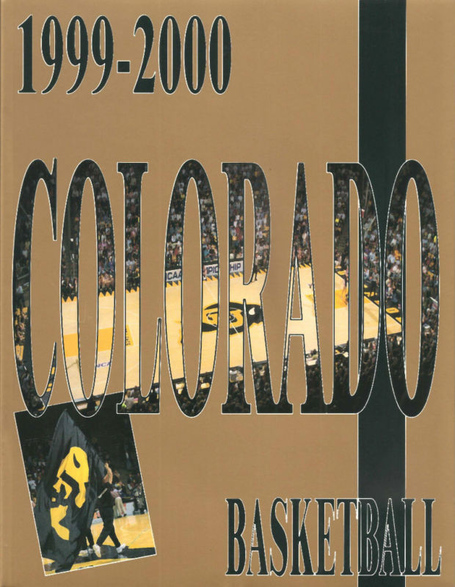 1999-2000: At 18-14, CU made postseason play for the 3rd time in 4 years (NIT) and Patton became 4th among all time winningest men's basketball coaches in school history. Jaquay Walls, the Senior guard from Brooklyn, was the clear star with many epic performances, none greater than when we came from behind to defeat Iowa State in overtime 102-90, at the CEC. Walls scored a NCAA-record 15 points in the overtime, finishing the game with 42 points. What a game and what a great way to end the decade.

The Buffaloes looked primed to have continued success at the century turned, and the familiar names and faces that many of us think of today as fans of the program will start arriving on campus and helping us all realize that besides a couple of hiccups (36-58 under Jeff Bzdelik, but oh he was such a great recruiter and got us the much needed practice facilities...yeah, I know) we actually had a little success in the 00's. Check out Part 3 of our scroll down Pocket Schedule memory lane as the women end up sharing the covers (rightfully so) and we get a new logo!