The Offtopic returns - Kit Kat's around the world

I have been away. You don't serve that. What you deserve is me and my friend reviewing weird Kit Kat Flavors from Japan. So here we are.

Share All sharing options for: The Offtopic returns - Kit Kat's around the world

So my friend JT and I talk about snacks and candy. A LOT. Far more than any two grown men should ever talk about snacks and candy. One thing we both like are Kit Kats, so we decided to sample some of Japan's finest versions of Kit Kats. Rather, I decided for us and ordered this crap on Amazon. Japan is weird. They have weird versions of Kit Kats. So let's see where this journey takes us why don't we? 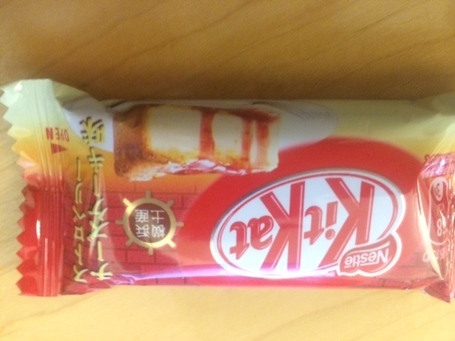 First up was a strawberry cheesecake. It was pretty good! JT does not like cheesecake, but he found the taste to be pleasing. I thought it was decent. Not great, but if you didn't know it was cheesecake, you could definitely identify it as cheesecake. Or strawberry shortcake at least. Cheesecake is pretty gross anyway. 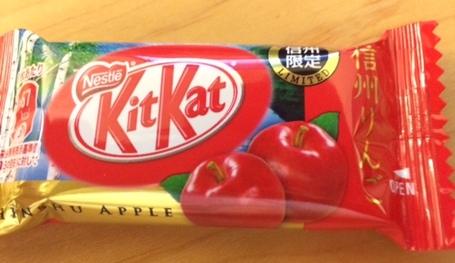 Second up was Apple. This was easily the most identifiable flavor. It smelled strongly of apple, and tasted strongly of apple. The only problem- you know what flavor does not pair well with chocolate? Apple. It was terrible and kept getting more terrible the longer in lingered on the palette. I gave another one to my friend Barbara, and she hated it so much that she wouldn't try another flavor for the rest of the challenge. 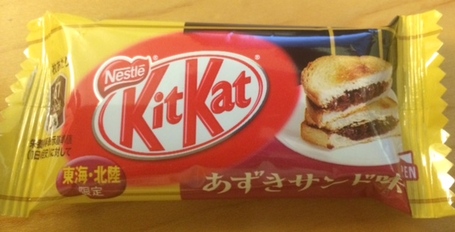 After that came this... thing. Even though it looks like bbq pork, it's actually peanut butter and grape jelly, we think. And frankly, it tasted like a peanut butter and jelly sandwich, plus chocolate. Unfortunately, those things are not complimentary flavors, and frankly- it felt like it sat in my stomach like the sandwich, despite being a tiny wafer bar. It tasted like what it was supposed to taste like but just was not very good when put in the mouth. Like a Papa Johns pizza. 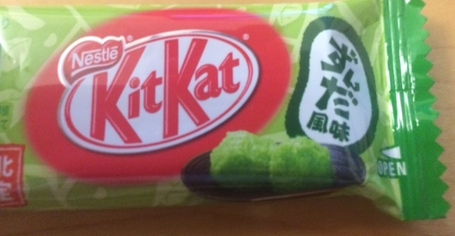 Next was, um, green? I don't know. It looked like a pile of the color green. We decided that it was green tea, but I don't really know what green tea tastes like, and to me it tasted like nothing more than white chocolate, although JT said he tasted a hint of green tea. He also called me racist for only tasting the WHITE chocolate. So there's that. 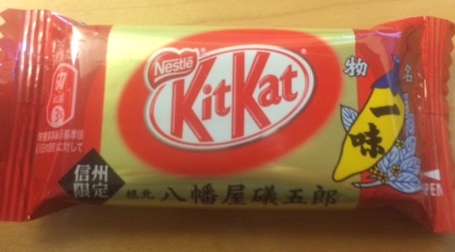 This was the next up. I originally thought it was banana, but now we're thinking it's some sort of pepper. After trying it- it definitely wasn't banana. JT was the first to feel the tiny bit of heat, and later, I did, but the overwhelming flavor was dark chocolate, which we hadn't experienced previously (in the challenge- we've had dark chocolate before. We're snack experts). But it was really mild, and we both felt that the final installment would be the strongest- mint. We think. We really aren't sure, but it looks like mint. Sort of 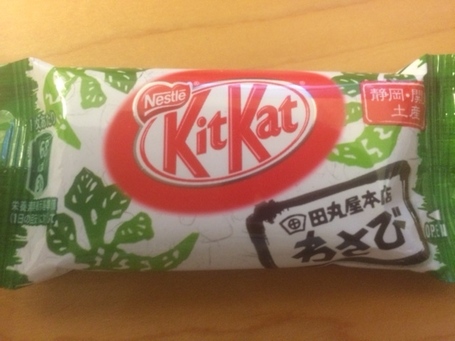 After 6 rounds of the Weird Kit Kat Challenge, the clear winner is DUN DUN DUN... 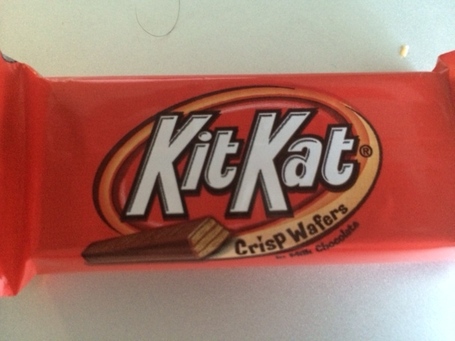 The good old American Kit Kat. We went into the challenge thinking that America was behind the times, suffering from a lack of innovation. In reality, we were perfecting the candy process, figuring out what was the best, and delivering it to the welcome public. We are efficient and streamlined. We don't need your stupid extraneous flavors, because we've already found the best one. Much like World War II, we have defeated Japan in snack form.

12: Maybe that green tea one

Infinity: Apple. This was god awful. It tasted like disease