The University of Colorado has finally found it's man to lead the Buffaloes.

Share All sharing options for: Rick George Named Next Athletic Director at Colorado

Well FINALLY. It will be official very shortly; the University of Colorado has an athletic director. In a message to Buff Club members Associate Athletic Director Kurt J. Gulbrand invited members to attend a press conference introducing Rick George as the new Director of Intercollegiate Athletics for the University of Colorado. The press conference will be held in Byron R. White Stadium Club at Folsom Field at 2:00 pm. 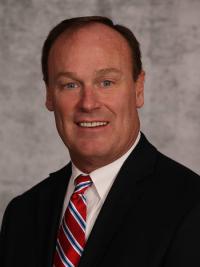 Even though it seems like forever that the athletic department has been operating in the interim, this announcement has come much more quickly than many were expecting. Even the projected timeline hinted that the process of finding a new "boss" would be a bit more drawn out than this.

This move certainly looks like Bruce Benson's promise of investing heavily in athletics was valid. Rick George was most recently President of Business Operations of the Texas Rangers and, according to his bio, has spent "nearly 30 years as a sports executive on the professional and collegiate level". George has a proven track record of success not only in business, which was a public emphasis for any candidate in this search, but also in the arena or athletics. He has been the president and CEO of non-profits, he has been an Associate Athletic Director at Vanderbilt and more importantly at CU from '87-'91 (read GLORY DAYS).

At first blush this is a homerun, A+ type of hire. There is no "we got the best guy available, considering we are rebuilding". George, by all accounts, is the real deal and this is a great day for the University. I genuinely believe that we got the guy at the top of our list. I am not the only one who is excited about the hire either. Former head coach Bill McCartney and Chancellor Phil DiStefano had this to say:

"He's a dynamo," McCartney told the Camera earlier this summer. "He's a star. He's got a spirit about him. He doesn't have a bad day."

"I am delighted that Rick has accepted our offer to lead our athletic department," Colorado chancellor Phillip P. DiStefano said in a statement. "Rick's financial and management acumen, his networking and relationship development skills, and his enthusiasm, work ethic and principled leadership all make him the ideal leader for CU athletics at this important and challenging moment in our history."

Now to give you an idea of what Rick George has done:

According to ESPN George's first day at the University of Colorado will be August 12. CEO of the Texas Rangers, Nolan Ryan had this to say about our new AD:

We wish Rick well as he pursues his passion of college athletics," Ryan said. "We appreciate his many contributions the past few years, particularly his efforts to help us increase revenues and attendance to record levels.

In his own words:

I am honored to be selected as director of intercollegiate athletics at CU-Boulder," George in a release posted on the athletic department's website. "CU is a special place for my family and me, and this is a marvelous opportunity at a great university in the best collegiate athletic conference in the country. I am looking forward to getting back to CU to begin working at this great institution.

More from The Ralphie Report:

The Search for the Next Athletic Director at Colorado