Back To The Sporadic Offtopic, With Basketball And Food

After a long respite, the random Offtopic is back, touching on our ongoing fundraiser, basketball, food, and food.

Share All sharing options for: Back To The Sporadic Offtopic, With Basketball And Food

First! Don't forget that there's still time to donate to our fundraiser here. If you've been living under a rock, we're raising money to donate to the Ralphie Program. Donating enters you into our raffle to win our Ralphie prize. But that's not the important thing. The important things is that we're raising money to help sustain the Ralphie program, the greatest symbol of our athletic department. We're currently at $1,475. As I've mentioned before, funding Ralphie costs $30k per year, which equals $82.19 per day. Funding 18 days of Ralphie would cost $1,479.42, so we're close to that. But let's keep pushing forward. 3 weeks of Ralphie funding is $1,725.99. A month is $2,301.32. That's not so unreasonable, with the 15 days we've got left. A month of fundraising to fund a month of Ralphie. We considered our original goal modest, and you've proven that we were correct. We are very grateful for your contribution, and look forward to pushing toward our new goals. Anything you can throw helps. Plus, PRIZE! And now, prize revealed, via very crummy iPhone photo: 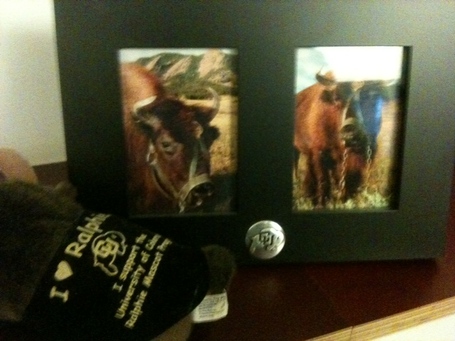 CU has sent us a framed photo of Ralphie V in a CU logo frame, and a stuffed Ralphie with a little Ralphie cape that says "I support the University of Colorado Ralphie Mascot Program" on it. These were initially offered when Ralphie V was introduced and are not available for normal purchase. It is a fine addition to your office or home bookshelf. Thanks again to Gail from the Ralphie Fund!

And so our Big Break Mexico coverage ends- not with a bang, but a whimper. Honestly, I wrote up a very lengthy review of the last 3 episiodes, but it was very long, and very dull, and even I got bored reading what I wrote, so to hell with it. The bottom line is, Emily was eliminated. I'll probably still be watching, but won't recap it here (not that I did a very good job here anyways).

Going off of the latest edition of Buffstampede Radio, I thought a fun thought exerise would be to examine where best the Buffs (future and current) in the NBA might fit.

Chauncey Billups: Chauncey is old. Really old, by professional sports standards, but can still serve as a servicable backup combo guard for a contending team. So I give him to the Oklahoma City Thunder. He provides the veteran leadership of Derek Fisher, while improving on the fact that Derek Fisher is objectively terrible at playing pasketball. Chauncey can backup Russell Westbrook at the point and enhance the shooting guard position behind Thabo Sefalosha, adding outside shooting in the event that Kevin Martin moves on.

Chris Copeland: Cope is a terrific outside shooter who is roughly rubbish at most other things. But there's clear value in that from the power forward position, and he's likely to price himself out of the Knicks' budget this offseason. So I give him to the Los Angeles Lakers. Copeland is exactly the player that Mike D'Antoni wants Pau Gasol to be- a stretch four who can shoot from distance and space the floor for Dwight Howard. And Howard's defensive presence covers for Cope's deficiencies on that end. If the Lakers could flip Pau for someone like Arron Afflalo who can defend on the perimiter, they might be able to salvage this tragically overpriced and limited roster. (and no, I don't like the Lakers)

Alec Burks: This is a tough one, because at first glance, he would seem to be a good fit for the Jazz, and just needs some run. He has the athleticism to be a good defender, but he isn't. Perhaps he just needs some experience, something he's still not likely to get now that Jerry Sloan, who was notoriously averse to playing young players, is back with Utah as a special advisor. He might also be a good fit for the Lakers, adding youth and athleticism to a squad that sorely needs it. But that's not really fun or creative. Instead, I'm going to give him to the Chicago Bulls. Chicago struggles to score, and if anyone can develop his defense, it's Tom Thibodeau. Alec can score, and with Derrick Rose, Jimmy Butler, and Luol Deng, Burks can fall into place as a backup scoring option and secondary ball handler and develop without pressure, but with a great structure around him.

Carlon Brown: Honestly, I'm not sure if Carlon Brown is an NBA player, but we'll give him to the Phoenix Suns, because they don't have many NBA players already, so this would at least give him a chance to prove his worth. That is, assumping Michael Beasley actually passed him the ball, which is questionable at best.

Andre Roberson: Honestly, this is another guy I could see helping out the Lakers. I mentioned it in my article examining the positives and negatives of him entering the draft. I promise I'm not a Lakers fan, they're just the only thing that ESPN radio in LA ever talks about (I'm looking at you, Max and Marcellus!). Call it a hunch, but I can easily see Andre ending up with the Toronto Raptors. Masai Ujiri is familiar with the CU program. Cory Higgins and Austin Dufault both got tryouts with the Nuggets, and Roberson fits the profile of long, athletic, versatile forwards that exemplified the Nuggets roster last year. This is a man that acquired Wilson Chandler, Danilo Galinari, Evan Fournier, and Kenneth Faried. Roberson fits well within that profile. Toronto doesn't have a draft pick right now, but, um, that might not be an issue unfortunately.

Spencer Dinwiddie: Obviously this is pure projection, but Spencer is most likely to move on to the next level after his junior year. I think he would be a perfect fit for the Indiana Pacers. First, and most importantly, people in the midwest love their mustaches. Additionally, DJ Augustin is a black hole as a backup point guard. George Hill leaving the game for Indiana was just as bad as when Dinwiddie left the game for CU last year- meaning bad things were about to happen. Spencer likes to play slow, like Frank Vogel does, and he is extremely tall for a point guard, which fits into the Pacers profile. He can backup both guard spots right off the bat and defend on the perimeter, which again fits into what the Pacers want to do. Also, he's not DJ Augustin, which is an improvement no matter which way you cut it.

Food Field Trip! Hey, remember when we went to Taco Bell to sample all of the locos tacos? That was pretty stupid. So this time I went to McDonald's to sample their new egg white McMuffin. Perhaps you've seen these commercials. McDonald's is replacing their normal egg McMuffin with egg whites, whole grain English muffins, fancier cheese, and thick cut Canadian bacon. Mmmm healthy, right? Of course not, you idiot! But I've got to say- the egg white McMuffin was better. The white cheddar cheese was very creamy, the egg whites were fluffy and didn't taste as processed as the regular McMuffin, and overall it felt more rustic, homey, and less "fast food." Should you order it and feel good about yourself? No. You're still a fat slob who is shoving your maw full of McDonald's. But you can definitely eat it and feel better about yourself than the fat slob in sweat pants who is eating the normal McMuffin, like some sort of cretin.

Finally, welcome to the first installment of The Ralphie Report Recipe Corner. We're attempting to fill the void left by Paula Deen being a huge racist. But our recipe features no butter whatsover, so this is a poor analogy, but timely!. It is a very simple recipe, because you are probably kitchen morons. Ingredients:

Preset your oven to 300 degrees.

Take your bacon and bread it in red pepper and brown sugar. Put your breaded bacon on a tray. Throw that bitch in the oven for an hour, and voila- spicy bacon candy! You're welcome. Your red pepper to brown sugar levels may vary, but I recommend very little red pepper and very much brown sugar. Enjoy it at your next tailgate or family gathering. It could also serve as an excellent garnish for your bloody marys, maybe. Everyone enjoys a hearty breakfast of liquor and bacon. (hat tip to my friend Dan for the recipe. Dan also makes a mean Bloody Mary 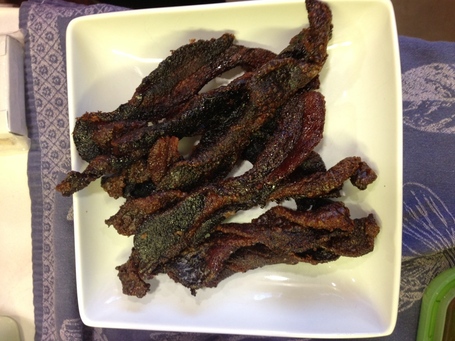