The Ralphie Report Does Phil-anthropy.

If you were wondering if there is an end to my Phil Related terrible puns- there is not.

Share All sharing options for: The Ralphie Report Does Phil-anthropy.

So I've been reading an interesting thread on AllBuffs regarding fundraising, which dovetails nicely with my "what's next" piece that was absolutely adored by espn dot com. I posted one thought there, and was going to continue, but I thought I'd take my talents to Ralphie Report so that you could chime in, in the comments!

In years past, we've heard a lot of people say, "I won't donate until...." followed by whatever they won't donate until. Hawkins is gone, Embree's gone, Bohn's gone, sociology is gone... whatever. Personally, I said that I wouldn't donate again until Barnett was gone, and I didn't. Then after the Kansas game, I said I wouldn't donate again until Hawkins was fired, and, well that lasted 3 days, but it was true. I know others had much less tolerance and refused to donate for quite a while before that. All well and good.

Of course they, and I, could've continued to donate - just not to football. Divert your donations to basketball, to physics, to volleyball, or like I did - to Ralphie. There will never be a time when donating to the Ralphie program is not worth your kind gesture..

But that comes to my biggest problem with the fundraising within the athletic department, and one that's been expressed elswhere consistently - it's just too hard to find ways to donate. The department should make it easy. Back to the Ralphie fund. The first time I donated... honestly I don't know how I found the link. There might have been scotch involved. But I donated, and I got back a framed picture of Ralphie and a little stuffed Ralphie, both of which currently reside on my desk at work. I then talked up the Ralphie program, had someone ask how they could donate, and I couldn't find the damn link to save my life. I spent 20 minutes, and I could. not. find it. How stupid is that? It's easier to find now, whether it was moved, or I was just an idiot previously, but it still stands- you shouldn't have to work hard to find a way to donate to the greatest symbol our athletic department has ever had.

And that goes for all other athletic fundraising as well. Go to cubuffs.com and tell me how to donate to the facilities capital project. I'm not saying you can't do it, but I'm saying I sure as hell can't do it. Unless you aren't already thoroughly engaged, it's impossible to find a way to specify where your donations will go, and that's important. People want to donate to the facilities, to football, to basketball, to whatever. Make it easy for them to do so.

The worst donors are those who say, "I won't donate until we get good again." One - no, you probably won't. Two - you're the very definition of a fair weather fan. Three- you can still donate, but just to a part of the university or athletic department that you would prefer. Like Ralphie. If you can't donate to Ralphie, you can't call yourself a Buffaloes fan. You only support winning, like an asshole? Well there's a skiing program that would gladly accept your donation: 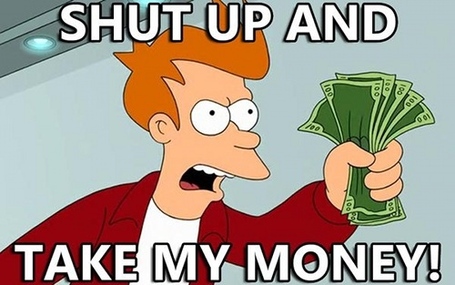 One thing I believe would help this level of donor is micortargeting. Many schools utilize this with "brick campaigns." More important that actually raising funds is establishing a group of engaged, willing donors for the future. Do they only have $100 for a dumb brick with their name on it now? Well maybe they invent twitter and gift you a dumb building with their name on it in the future. Hell, the Rockies did this when they were building Coors Field. My alma mater did this when we were building a new gym. I am part of about 5 bricks in the courtyard outside our gym. One is from my religion class where my beloved teacher Mr. Haber charged us $5 every time he caught us chewing gum. I think I contributed 50% of that damn brick. There's also one for my family, me and my brothers, my grandparents... everyone loves their name on a brick. Why didn't we start with that for our facility project? "We're building new facilities, and you can literally get in on the ground floor by purchasing a brick." It's too logical. Hell, it would've been even more logical back during the kerfluffle of Embree bringing back the brick wall with the milestone games. But it didn't happen, because CU sucks at microtargeting.

So let's start it for them. I don't propose that we start a brick program. Mostly because I don't own any bricks or a place where we could lay the bricks or the authority to lay them anywhere or the skill or desire to actually lay bricks. I'm very lazy and delicate. What I do propose is that the Ralphie Report family raise $1000 to donate to the Ralphie Fund. I'll kick in the first $100, so we're ten percent of the way there already. We can raise more, and that would be fantastic, but our goal is $1000. $1000 to show that a bunch of loyal Buffalo fans coming from modest means can set a modest goal and achieve it. And we don't even have to put our name on Ralphie, because that would probably hurt her.

If you want to donate to our campaign, go here: www.gofundme.com/37mk7c

FAQ: Why don't we just donate directly to the Ralphie Fund? A fair question. The answer is- we're trying to prove a point. The point is, CU is bad at targetting and engaging small donors. The solution to this is to be better. And it's not hard to do. Yes, there are extraneous fees associated, but the lucrative world of unpaid bloggering will no doubt make up the difference. (ed. note: I did not approve this comment, but I make sure that it becomes true. TRR will cover any fees GoFundMe takes)