The Weekly Offtopic- We're Late This Week. Sorry (sort of)

Sorry for the delay, I was busy pulling all sorts of amazing content of of my various orifices. I do it for you, the readers. But here we are again, sending you into the weekend with discussion of paying college athletes, our weekly tennising, the Jeremy Adams transfer, and a food field trip!

Share All sharing options for: The Weekly Offtopic- We're Late This Week. Sorry (sort of)

Should college players get paid? This is something that I've avoided commenting on for some time, mostly because the idea kind of blows my mind. If the Ed O'Bannon suit goes in favor of the plaintiffs, it will completely blow up the entire concept of amatuer athletics. Not only because the revenue streams currently relied upon by NCAA member schools for debt service and operating expenses will be decimated (a great many schools will likely end up in bankruptcy), but also for tax purposes. I fail to see how the NCAA will continue to be able to claim tax exempt status. That's even more revenue out the door. And if that's the case, all of the money from donors will also no longer be able to be claimed as a tax deduction. Would Phil Knight, T. Boone Pickens, or anyone else donate as much if they couldn't write it off on their taxes? I doubt it.

But one thing struck me today. Someone sent a twitter to SI's Andy Glockner asking, "should high school players get paid then?" and Andy responded with a dismissive, Glocknerian, "When they get TV contracts worth 11 figures." I responded that plenty of high school programs are revenue generators, so why should it matter? Of course he didn't respond, but the point remains, and remains firmly stuck in my craw (whatever a craw is). A revenue producer is a revenue producer, regardless of the dollars involved. It shouldn't make any difference if it's a player at Louisville or a player at, say, Mater Dei, Mullen, Austin Westlake, Miami Northwestern, or any other high level athletic program that pays their coach high salaries in exchange for success. If amateur athletes deserve to be paid, then they deserve to be paid regardless of their level or the actual money involved. Otherwise, what's the cutoff? Do you deserve to get paid only if your school gets over $10 million a year? 5? 1? This is an incredibly slippery slope that could collapse upon itself depending on the results of the lawsuit.

Let's shout out the Colorado Buffs Tennis Team, who have broken into the ITA top 75. It's the first time since 2010 after defeating #59 Oregon 5-2. Dhany Quevedo / Mazy Watrous and Winde Janssens/ Carla Manzi Tenorio won their doubles matches, and Julyette Steur, Winde Janssens, Erin Sanders, and Carla Manzi Tenorio all took down their singles opponents. Like I've said before- the program is on the upswing. It's time to get in on the upswing for Colorado Tennis.

Even though Your Offtopic was delayed, maybe it's for the best, because now we can use this slot to discuss the transfer of Jeremy Adams, which was announced Thursday. Jeremy will move on to pursue a master's degree in "industrial organizational psychology." Before I knew what he would be pursuing, I was going to make a joke about returning home to Mississippi to pursue a master's in parks and recreation like Jeremiah Masoli (and I use "joke" very loosely, since that was pretty much the entire thing). Instead, I did some very excellent Investigative Journalism and found Jeremy a happy landing spot. The University of Maryland- Baltimore County has just such a program, and is losing 3 senior guards, including 2 of their 3 leading scorers. Rivals also lists no current signees for the class of 2013. Alas, UMBC is not very good at basketball, but they do have a quite strong lacrosse program. Good luck and godspeed in Maryland, Jeremy, and come back and see us soon. Who takes as over as our leading dancer in internet videos remains up in the air as of press time, although my sources indicate that Eli Stalzer may be the current leader in the clubhouse. Find your own landing spot for Jeremy here. One ironic option? Texas A&M. Also, no choosing Colorado State

This week, you get an extra dose of investigative journalism, as I went ahead and did this: 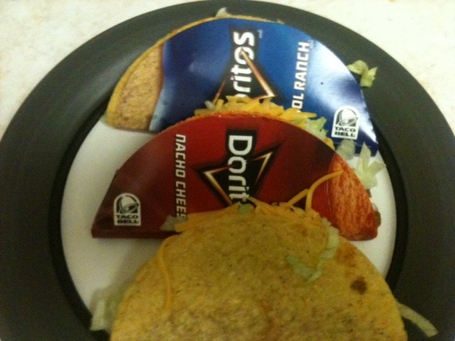 Yes, I sampled both Doritos Locos Tacos. In order to produce a baseline, I also ate a regular crunchy taco. I am writing this from the toilet, where I will remain for the next several weeks. So how were they? Salty. So very very salty. As soon as I finished them, I became acutely aware that I forgot to stop at the grocery store for water. But they were okay, certainly worth the extra dime to make the step up from a regular, non-loco taco. Personally, I preferred the Cool Ranch Loco Taco, but I also prefer Cool Ranch Doritos. I imagine that the reverse would also be true. Overall, the Doritos flavoring is pretty mild. Just on looks alone, there didn’t seem to be as much seasoning on the taco shell as there is on a regular chip. Personally, I would’ve loved to see a Cool Ranch chicken ranch chalupa or something. I put way too much thought into this, obviously. I could also see how upgrading to the Loco Taco Supreme could help, with the sour cream cutting some of the overwhelming saltiness. Also, Taco Bell still sucks and no one should ever go there for any (not intoxication related) reason.