The Weekly Offtopic: Stop Lying, Your Bracket Is Terrible

In which we discuss a tough sports weekend, everyone's crummy bracket a Psych marathon, a book, a new movie trailer, and me complaining about my drive home. Sorry, this week's isn't funny. I blame it on the crummy sports weekend.

Share All sharing options for: The Weekly Offtopic: Stop Lying, Your Bracket Is Terrible

For your soundtrack today, I present 48 Roses, by Mariachi El Bronx. What happens when a punk band decides to become a mariachi band? This happens, and it's awesome. If you don't like this, you're probably racist. Sorry about that.

If the answer is yes, then you're a dirty rotten liar.

After the first weekend, is your bracket still in great shape? If the answer is yes, then you're a dirty rotten liar. The good news, however, is that everyone else in your pool also has a garbage bracket, so you're still in this! Really, this always comes down to who picks the winner of the final (you did not), so don't fret. All those white guys you thought would win did not do that. Instead, it was a completely different group of white guys who pulled off the upset. Who knew?! (answer- literally everyone who has ever participated in a bracket pool) From a personal perspective, the term "dumpster fire" adequately describes my stupid bracket.

Tennis had another rough weekend in California, getting shut out by both Cal and Stanford. By now, it's pretty clear that they need my support, as we've only had one lady win in the golden state and that was with me in the building. They finished off the weekend with a tough 4-2 loss vs. The University of San Francisco (home of Bill Russell!). Freshman Mazy Watrous, who's recently moved up to #5 in singles and #3 in doubles, picked up her third win of the year Also putting up victories were Winde Janssens in #2 singles and Julyette Steur and Erin Sanders in #1 doubles. 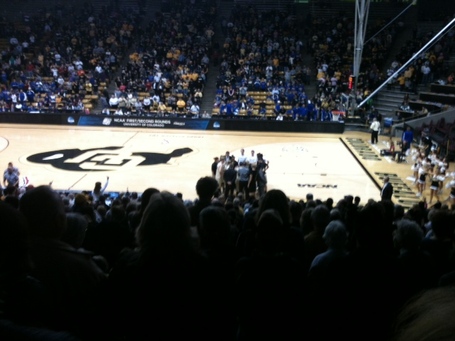 Sparkman provided a strong write-up of the women's game, but this is necessary because my mama was in the house and provided this picture. Not pictured are my mom and my cousin. What a disappointing ending to such a promising season, and a disappointing end to an incredible career for Chuck Jeffrey, who might be my favorite player ever. I'm just glad she got to experience the tournament.

So I'm on vacation this week, and I don't care for travel, or fun in general really, so I'm spending it doing absolutely nothing. Currently, I'm watching the 99 episode Psych marathon on Cloo TV, which is a channel I'm guessing you don't know you get- if in fact you get it. First off, it's interesting to see the evolution of the characters all at once. Except for Gus, who hasn't changed at all. Also, Cloo TV's entire lineup of commercials appear to be nothing but medicine for diseases I can't pronounce, weird looking exercise devices that involve stretching out big rubberbands, and other episodes of Psych. Oh yeah- and christianmingle.com

Book review - If you haven't read it and enjoy basketball, I can't recommend Play Their Hearts Out, by George Dohrmann strongly enough. If you've been paying attention recently, you'll recognize a lot of the names in the book, including Joe Burton and Roberto Nelson (OSU), Justin Cobbs (Cal), Justin Hawkins (UNLV), Demetrius Walker and Kendall Williams (UNM), Peyton Siva (Louisville), and others. Dohrmann was even able to use his previous reporting in an article on si.com regarding the firing of Ben Howland. It's probably my favorite sports book.

Allow me to get LA-centric for a moment. Every day I drive through fancy rich guy neighborhoods to get home, and every day I see Star Tours vans. And not the good Star Tours, like at Disneyland. These are just crappy vans with the roofs cut off, so tourists can gawk at the houses of movie stars. But they never see any movie stars, or even homes, for the most part. Because all of these houses are covered up by giant fences and shrubs. I can't even imagine how boring these must be. "OMG- there's a bunch of massive trees! And over there, more trees!"

And here's a new trailer for Danny Boyle's new film Trance. It should be super dope.