Colorado is in the NCAA Tournament for the second consecutive year and will take on Illinois. Here's a preview of the match-up.

Share All sharing options for: Previewing Colorado's First Round Game Against Illinois

Another year under Tad Boyle and another appearance in the field of 68 for the Buffaloes. This year, Colorado didn't need the automatic bid as they accomplished enough in the regular season to receive a 10 seed in the East Region. The Buffaloes will play on Friday in Austin, Texas at 2:40 p.m. MT on TNT and if they pull out a victory, they will take on the winner of Miami (FL) and Pacific. Here's a look at their opponent:

The Fighting Illini are a team heavily reliant on perimeter shooting. This year, they've beat Butler, Gonzaga, Indiana, and Ohio St. with superior guard play coming from Brandon Paul, D.J. Richardson, and Tracy Abrams and high percentage shooting. Paul is the go-to guy, leading the team in scoring at 16.3 points per game. The senior guard is similar to Colorado's own Spencer Dinwiddie, in that he uses over 28 percent of Illinois' possessions according to kenpom.com. Richardson and Abrams also handle their share of the Illini offense both averaging double digits in scoring at 12.8 and 10.6 points per game respectively.

As a team, the Illini led the Big Ten in three point shots made per game at 7.9, but they aren't incredibly effective as they only shot 32 percent from behind the arc. Like all teams with offenses oriented around outside shooting, the Illini are inconsistent.

Defensively, Illinois has tough guards with 6-foot-4-inch Brandon Paul and 6-foot-3-inch D.J. Richardson being the most effective man-to-man defenders for head coach John Groce. Although the Illini are certainly not terrible on the defensive side of the ball, they don't stand out as a team that can beat you with their defensive prowess. They are ranked 49th in defensive efficiency whereas the Buffaloes rank 28th. In addition to three guards, Illinois rounds out their starting lineup with 6-foot-9-inch Tyler Griffey and 6-foot-11-inch Nnanna Egwu.

D.J. Richardson can hurt teams on both sides of the ball. 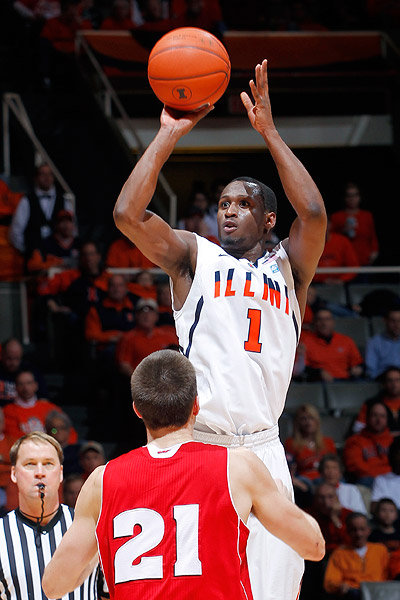 Egwu and Griffey average a combined 13.7 points per game and, more importantly for Colorado, only average a combined 7.9 rebounds per game. Griffey, however, can knock down shots from the outside and beyond the arc, shooting 55 percent on two pointers and 33 percent on three pointers this year. Since the Illini tend to play four out and one in, the glass is where Colorado has the biggest advantage with one of the nation's leading rebounders in Andre Roberson who averages 11.3 rebounds per game.

Off the bench for the Illini, Joseph Bertrand is the sixth man averaging 7.7 points while logging over 23 minutes a game. He's another pesky guard at 6 feet 6 inches tall that can rebound as well evident by his 4.2 rebound per game average and a season high 12 rebounds against Purdue.

Keys to the game for Colorado:

Don't get into a shootout and stick to the offense.

Colorado has similarities with Illinois, but getting into a shootout would not bode well for the Buffaloes. The Illini have proven many times this year that they can get hot and let their streaky shooting propel them to a victory. So, the Buffaloes need to stick to their tendencies. And that starts with Spencer Dinwiddie. He must continue to dribble off of ball screens for the open shot, drive to the hoop, and get to the free throw line. Along with Dinwiddie, Josh Scott and Xavier Johnson will need to step up with Johnson providing points from both outside and inside and Scott scoring in the post.

Andre Roberson must take advantage on the glass and defense.

As mentioned above, Colorado certainly is the better rebounding and defensive team. After Andre Roberson's performance against Arizona in the Pac-12 quarterfinals, it's evident he's back at full health. And Colorado is going to need a big time game from Roberson to pull out the victory. Although he doesn't have much in his offensive repertoire besides the occasional three-pointer and the drive to the right off a pump fake from the top of the key, his length is crucial for second chances, easy layups, and offensive rebounds. If he can put forth a similar performance to the one he had against the Wildcats, Colorado will be in great shape. Defensively, the double-double machine must continue to block shots and force steals to help the Buffs get easy buckets in transition.

Andre Roberson and his superior rebounding ability could benefit the Buffaloes greatly against the guard-oriented Illinois. (Jeff Gross/Getty Images) 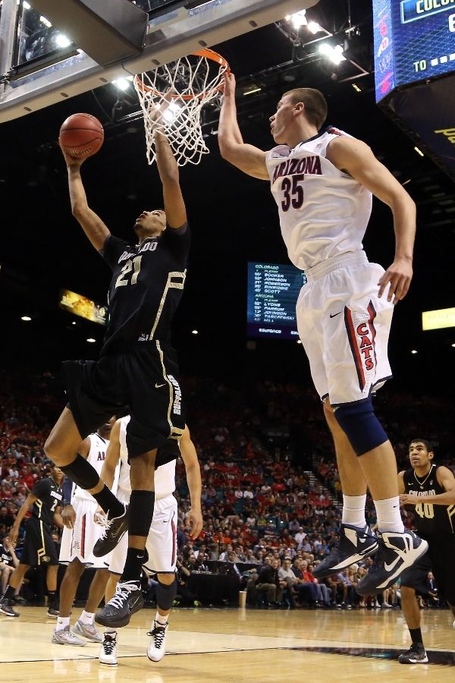 Tad Boyle should have a short leash on Askia Booker and the front court must limit the fouls.

We've all been waiting for a breakout game from Booker, but this certainly doesn't look like the game for it to happen. Jeremy Adams and Xavier Talton can hold their own on the defensive end and will need to be inserted quickly if Booker has his typical defensive mental lapses. Additionally, if the Illini's guards hit shot after shot, that could cause instant problems for Booker as he likes to take ill-advised threes and jumpers in response to opposing teams' runs. With Shane Harris-Tunks not yet cleared to play and unlikely to contribute much, the trio of Xavier Johnson, Andre Roberson, and Josh Scott must not get into foul trouble. If any were to pick up two quick fouls in the first half, it would take away Colorado's biggest advantage.

Just like UNLV last year, the Buffaloes match-up well with Illinois. Brandon Paul is a sensational senior guard, but with Andre Roberson guarding him, it's likely Paul won't have a high scoring game as Roberson has prevented players like Solomon Hill and Allen Crabbe from having good games this year. The Illini could shoot well right out of the gate and end up being too much for Colorado, but the Buffaloes are seemingly never unprepared on the defensive side of the ball and should be able to contain the strong perimeter play. The biggest factor is that the Buffs are much better on the glass than Illinois.