The Weekly Offtopic: Basketball and Video Games and Google Reader, Oh My

Welcome back to the Offtopic. Today are offering advice on how to fill out your bracket, Stupid CSU, the best video games for Nintendo 64, and Google making dumb decision.

Share All sharing options for: The Weekly Offtopic: Basketball and Video Games and Google Reader, Oh My

Here is your soundtrack song of the week: Changed The Way You Kissed Me, by Example. This kind of sounds like the dubstep all of the cool kids are listening to, except instead of sounding like a 14.4 dial up modem mixed with a cat caught in a belt sander and BASS DROP, like Skrillex, it sounds like super dope jamz. FUN FACT- the artist is friends with US Soccer star Clint Dempsey.

Did you miss my article about CU's Tennis Team? Judging by the comments, boy howdy you sure did! It was supposed to be part of the Offtopic, but was too long and thus became it's own topic. So let's all go back and read it.

Did you see this stupid thing? It purports to rate all 68 schools by "coolest" former student. It is highly inaccurate. For instance, it ranks our coolest former student as Christopher Meloni, who is famous for being in Oz, and maybe other stuff. That overlooks Matt Stone, Trey Parker, Robert Redford, um, probably an astronaut or something... bottom line, if a rankings list puts Colorado State over Colorado, it is wrong, full stop. Hell, if there was a list of "Top Higher Education Options in Ft. Collins, CO," that list would look something like this:
1) Commute to Boulder
2) Beauty School, probably
3) Just Give Up Already
4) Colorado State

I have won my bracket pool several times, so obviously you should be clamoring for my advice. With that in mind, here are some good tips for filling out your own brackets:

1) Pick lots of random upsets in the first round. Will they all hit? No, of course not. Will most of them hit? Nuh uh. But one or two of them will (probably)! Then you can shake your head at your friends and coworkers and say, "yeah, I totally nailed Belmont over Arizona. Can't believe you went chalk on that (and you'll definitely want to use the word chalk)." Which upsets to pick? Look at the team pictures of every school you couldn't place on a map. The ones with the most skinny white guys? Those are your guys, because they are probably good at three pointers.

2) Remember that, regardless of who you are rooting for, if your team loses, it can partially be explained by the other team being an inferior academic institution. "Our school could NEVER admit the idiots who just torched our team." Looking at you, Miami! This is applicable to all schools except for Florida Gulf Coast University. But all of their fans are either cooking meth incarcerated for cooking meth, so they probably don't even know they're in a tournament. They probably heard "tourniquet."

3) Remember to watch as many of the games as possible on Thursday and Friday during the day. Trust me on this- when you are at work, nothing could possibly tear you away from the nonstop hoops action. Because the alternative is work! But when you're off work, and therefore are no longer expected to complete work related projects, well, then things change. Suddenly maybe Chopped All-Stars is on, and I really want to see what kind of dessert this weirdo with a lip ring can create using squid ink, graham cracker pie crust, a funny looking vegetable I've never heard of, and a jar full of farts.

4) Will you win your bracket pool? No, no you will not. But if you do, I get half, thanks to my wonderful advice.

Here are the truly important rankings: Which are the best video games for N64? I left off any games I do not currently own, because I had to play them all again, for "research." So although they are very good, sorry NFL Blitz, Star Fox, and a host of others. We're left with: 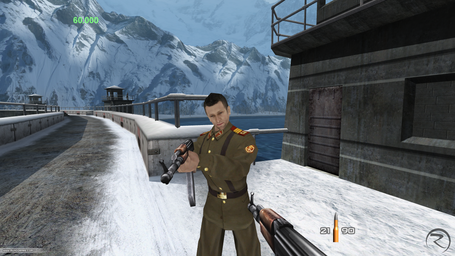 1) Golden Eye: This absolutely has to be the one seed. The first console game where you could walk around murdering your friends. Unfortunately, I was usually the murdered one. I suck at these kinds of games. I can't play Call of Duty or those kinds of things. I'm so bad that I don't even see the guy killing me most times. It's just me wandering around aimlessly for 20 seconds and then falling to the ground dead, as if for no reason. They might as well call the stupid thing Pulmonary Embolism. And it all started with Golden Eye.
vs
8) This was tough to pick, because all of the remaining games I have are very flawed. Mario Party is dumb, Star Wars Episode I Pod Racer was okay, but you know- Episode I. Vigilante 8 was decent, but there were much better options on Playstation and you could only play 2 player. So I went with Kobe Bryant's NBA Courtside, which was a decent enough basketball game, if you're into such things. What a ringing endorsement!

4) Zelda Ocarina of Time: This seems overseeding to me, but hey, it was in the hands of the committee and Zelda had a really strong RPI. For me, it was just frustrating as hell. You wander around for hours, doing nothing. Maybe playing a dumb flute, or swimming. Look, the reason I am playing video games is because those things are boring. This was a game for dedicated people who like, subscribed to Nintendo Power or something., and I was not that.
vs
5) Wayne Gretzky 3D Hockey: Now we're talking. For you young whippersnappers, before there was FIFA, there was NHL 94, a game no one played in real life, and had precious little interest in outside of the game. Wayne Gretzky 3D Hockey was 10 times more fun than NHL 94 (also- no Roenick). It was like the NBA Jam of hockey, playing 3 on 3 lines. It also didn't hurt that the game was released at the height of the Sakic/ Forsberg/ DEADMARSH Avalanche. Man, I loved Deadmarsh.

3) Star Wars Rogue Squadron: I wasted many, many hours playing this game. In fact, it's the reason I bought the system. It might be the only single player game I ever liked enough to get all the way through, with high rankings. Plus you get to do the Death Star trench run, and we all wanted to do the Death Star trench run. Bottom line- if you didn't like Rogue Squadron, you are stupid and wrong.
vs
6) Battle Tanx: This was such a sneaky great game. If you aren't familiar with it, you face off against 3 of your friends with varying different tanks. Some were fast, some were huge, some were middle. Then you just beat the hell out of each other. Would be higher on the list if I didn't figure out which group was completely unstoppable. That made it not very fun after a while (but it was a long while).

2) Mario Kart 64: Another true classic. Not only was it a great racing game, but everyone had a friend or two who would constantly end up in the lead before inevitably getting pegged with the blue spiky shell right before the finish line. Then he would curse, throw his controller, and then sulk the rest of the night. Also, the game was very popular with girls, so, you know- girls.
vs
7) Wave Race 64: Another relatively unknown game. Would be seeded higher if you could play 4 at a time, instead of only 2. What is Wave Race? It's racing each other, on waverunners. You pick your favorite racer based on size/ strength/ speed/ quickness attributes and then go after the course. Plus you could do super tricks, which I did. A lot.

What else did you like or dislike this week? Let's discuss it all, in the comments!