Before action gets underway on Wednesday in Las Vegas, here's a look at the matchups and teams in the Pac-12 Tournament

Share All sharing options for: Previewing the Pac-12 Tournament

The Pac-12 Tournament in Las Vegas has finally arrived. Action will start tomorrow as eight of the 12 teams will square off while UCLA, Cal, Oregon, and Arizona all have first-round byes. Colorado proved last year that winning four games in four days to claim an automatic bid in the NCAA Tournament isn't out of the question and this year's field could provide just as much excitement as last year. Here's the bracket and the outlooks of all the teams that will be playing at the MGM Grand: 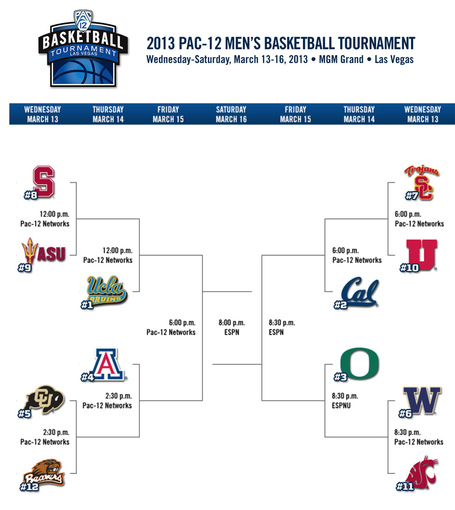 The team with the most talent in the Pac-12 finished as the outright champion. Shabazz Muhammad and Larry Drew II have been the Bruins' best players all year while freshmen Kyle Anderson and Jordan Adams have also contributed to the team's success. The Bruins are an efficient, fast-paced offensive team, yet they struggle with rebounding and defense. They are beatable as they have lost to Washington St., USC, and Arizona St. this season, but the Bruins also have shown why they are the number one seed as they have taken down Arizona twice and Cal once this year. UCLA will play the winner of Arizona St. and Stanford, and would likely rather see the Cardinal considering the Bruins are 2-0 against Stanford while just 1-1 against Arizona St.

Mike Montgomery's team has won seven out of its last eight games and has beat all the other seeds that have a first-round bye this season. They have arguably the best backcourt in the conference with Pac-12 Player of the Year Allen Crabbe and second team All Pac-12 player Justin Cobbs. Despite finishing their season with a loss to Stanford, the strong backcourt and improved play of Richard Solomon and Tyrone Wallace will make Cal a tough out in Vegas. Cal will play the winner of USC and Utah, a group of teams they are a combined 4-0 against.

The Ducks started the Pac-12 season off 7-0 and looked like the clear favorite to win the conference. Then, Dominic Artis went down with a foot injury, and the Ducks' season went south. They finished 5-6 in their final 11 games and missed two opportunities to win the Pac-12. Although Dana Altman has said Artis will get starter minutes, the Ducks have yet to play like they did earlier in the season. Oregon will play the winner of Washington St. and Washington, and shouldn't have trouble with either opponent as they are a combined 4-0 against the two schools.

In contrast to Cal, the Wildcats have not beat any of the top three teams in the Pac-12, losing to UCLA twice, and Cal and Oregon once. They also lost to Colorado and arguably should have lost to them at home as well in the beginning of the year on the controversial buzzer beater. Nevertheless, Arizona has the depth and talent to win this tournament easily, but their defense has been very inconsistent in conference play. The Wildcats will face the winner of Colorado and Oregon St. Barring another upset by Oregon St., this should be the best quarterfinal to watch.

For the second straight year, the Buffaloes ended their season with a loss to Oregon St. and will have to play four games in four days to win the Pac-12 Tournament. If Andre Roberson is back, the Buffs are obviously a much better team and have proven this year they can beat anyone in the conference. Colorado knows what it is going to get from Roberson and Spencer Dinwiddie, but will need Xavier Johnson or Josh Scott to step up to avoid an early exit in Vegas. With a win over Oregon St., the Buffs would draw Arizona.

The Huskies have had their ups and downs this season starting the conference season with four consecutive wins followed up by four consecutive losses. Ultimately, Lorenzo Romar's team is unlikely to have much success in Vegas. With a win over Washington St., they would have to face Oregon, who they are 0-2 against this year.

There were some positives to this season for the Trojans as they fired Kevin O'Neill, which led to some upset victories over UCLA and Arizona under interim coach Bob Cantu. They didn't end the season on a good note, however, falling to Washington and Washington St. last weekend. They will take on Utah first and will play Cal if they win, but it does not bode well for the Trojans that they have already lost to Cal twice this year.

Another year filled with expectations and another letdown from Johnny Dawkins and Stanford. The Cardinal have a better chance than the higher seeded USC and Washington to win the Pac-12 Tournament and steal an automatic bid because of Dwight Powell and Chasson Randle, but they have the hardest draw of the first round as they face Arizona St.

Despite finishing ninth in the conference, the Sun Devils had a very successful conference season given their expectations. They started out strong, but tailed off late losing their last four games ending any hopes of getting at an-large bid to the NCAA Tournament. First team All Pac-12 Jahii Carson and second team All Pac-12 Carrick Felix can cause problems for any team making the Sun Devils a threat to upset UCLA if they get by Stanford.

The Cougars ended the season on a high note beating UCLA and USC behind strong performances from Brock Motum. Washington St. will play rival Washington and if Motum keeps up his play, the Cougars could pull out the win. Nothing more than one win, however, should be expected from Washington St. in Vegas.

The Beavers, just like the Cougars and Utes, are coming off their best win of the season against Colorado and will face off with the Buffaloes once again. Unless Colorado comes out completely unprepared or Roberto Nelson has an unstoppable game, this is the end of the road for Oregon St.

Round of 12: Arizona St. over Stanford, Colorado over Oregon St., USC over Utah, Washington over Washington St.

The top nine seeds all have the ability to win the conference tournament, but I'm going with UCLA because they have the most talent in the Pac-12 and they make up for their rebounding struggles with their efficient offense.