It's finally here. Colorado's basketball season opens tomorrow night at the American Airlines Center against Baylor. Here's a look at the players that Tad Boyle has on his roster this season.

Dinwiddie is Colorado's best player and arguably the best player in the Pac-12. He was on the All Pac-12 team last year and is on the pre-season All Pac-12 team this year. Despite the fact that Dinwiddie only shot 33 percent on threes last year according to KenPom, he still can hit from long-distance and anywhere on the floor. He is an excellent defender and uses his large (for a point guard) frame to be active in passing lanes and halt penetration inside. As last season progressed, he became the focal point of every Colorado game. It wasn't necessarily his fault, but it was rare to see Colorado lose when Dinwiddie excelled and vice-versa. KenPom points out that he had the best offensive rating on the team last year while also highlighting his true shooting percentage of 59.1. The aspect that stands out most about Dinwiddie's game is his ability to get to the free-throw line. He had a free-throw rate of 76.7 last season while making 82 percent of his free throws.

Dinwiddie will certainly succeed this year once again and depending on the team's success, it's possible that we will see The Mayor at the NBA Draft in June. He could improve on his low rebounding average, but his control of the transition game is more crucial. Against opponents that were great defensively in transition, the Buffs tended to struggle and the half-court offense became stagnant. That problem could be solved with anyone else on offense consistently scoring in the half-court or Dinwiddie could push it more. At times last year, he would take his time up the court and defenses wouldn't have to worry about the transition and be able to set up. Ultimately, he's the best player on Colorado and will be the reason Colorado has success just like last year.

Booker is the most intriguing player for Colorado this season. When he's shooting well, the Buffs are close to unstoppable. Ski decided to have his best games in the first three games of the season winning the Charleston Classic MVP and scored a season-high 23 points in the championship against Murray State. Then, he didn't stand out with a good performance until the last game of the Buffs' season against Illinois. He shot 39 percent on two-pointers and 31 percent on three-pointers for the entire year. It also doesn't help that Booker doesn't bring much defensively, which usually doesn't bode well for a Tad Boyle player. Booker, however, was an exception as he continued to log heavy minutes last year no matter what he did on the court. Additionally, he was highest on the team in percentage of possessions used and percentage of shots taken. He struggled at the free-throw line posting the lowest free throw rate in the starting lineup at 19.4 and only made 70 percent of his free throws.

If Booker is in a shooting funk, the free-throw line should be a place to help him out. But he will need to improve his ability to finish in traffic and with contact this year in order to get to there. Booker worked all offseason to improve his shot, yet some have clamored to put him on the bench and have him as a sixth man. The bottom line is that he's going to be in the starting lineup and going to shoot, so hopefully his hard work in the offseason will pay off.

Johnson was easily the most improved player on last year's team at the end of the season. He began to take the starting job away from Sabatino Chen against Arizona on the road after a 13 point 6 rebound performance. What stood out in that game was his three-point shooting. He showed his range against the Wildcats and continued that trend for the rest of the year. Johnson shot 43 percent from beyond the arc last year and 54 percent on two-pointers. To complement his shooting, Johnson can also score down low. He excels in transition and is the only player on Colorado that can dunk on people consistently and feeds off the Coors Event Center environment.

Although his rebounding numbers are low, time will tell if that was just a matter of playing with Andre Roberson, who rebounded everything. What he does have in common with Roberson, however, is his free-throw woes. Johnson only shot 56 percent from the free-throw line last year, which is terrible. If Johnson is going to be a secondary option, he needs to hit free-throws. Defensively, he won't gain any praise, but his offensive abilities outweigh his inconsistency on defense. As long as Xavier Johnson continues to hit from three and score in the post, he's going to be hard to stop once again.

Scott was named to the Pac-12 All-Freshman Team last year and brought an inside presence that Tad Boyle never had before at Colorado. Scott is a fundamentally sound big man and can hurt teams with his back-to-the-basket game that features a variety of post moves with both hands. Scott declined as the season went on failing to score in double digits in his last ten games, but a concussion played a role in that. Scott added on weight to his critiqued frame in the offseason and should be a much better player this year.

He struggled last year boxing out consistently and certainly did not rebound well enough defensively for someone of his size. His offensive rebounding percentage was higher than his defensive rebounding percentage according to KenPom, which is not a good attribute for a big man. His free-throw shooting, however, is much better than most players his size. He shot 74 percent from the free throw line last season and as long as Josh Scott can produce consistently throughout this season, he should have more Pac-12 honors coming his way. 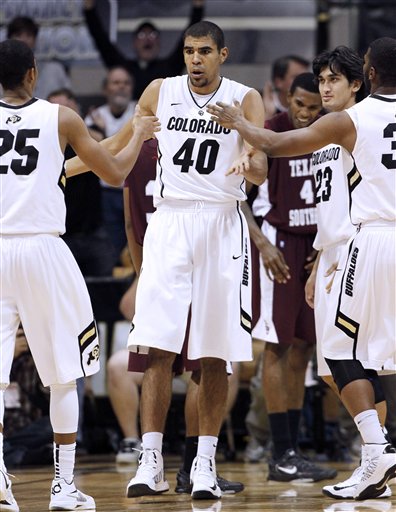 Josh Scott could be reeling in Pac-12 honors this year again if he can improve on last year's strong freshman season.(AP/ David Zalubowski)

Talton might be the only returning player off the bench who will see consistent action this season. The sophomore didn't start last year off on the right foot struggling to excel against tougher competition. But as the year went on, he improved greatly. He wasn't coming off the bench for an offensive boost, yet his defense kept him in games. He became a very good, scrappy defender who could handle the ball as well to spell Dinwiddie or Booker for short periods of time. This year, I would expect Talton to fill a similar role coming in and showing off his defense. On offense, he needs to become more consistent shooting the ball, but Talton will be a factor in Colorado's second unit.

Stalzer fell completely out of Tad Boyle's rotation towards the end of last year and it's hard to see him cracking this year's rotation for most games. He isn't great on either side of the ball and was seen as a disappointment at the end of the season. Stalzer needs to improve his shot and be able to make threes consistently. He doesn't provide the defensive skills or energy that Talton does which will be a main reason that Stalzer sees the floor much less.

Technically, Gordon isn't a new face as he redshirted last year, but he will be playing minutes for the first time and is projected to be a starter this year switching off with Dustin Thomas depending on matchups according to Tad Boyle. Gordon is a strong defender and rebounder and although he isn't as polished on offense as Thomas or Josh Scott, it shouldn't matter given the amount of offensive firepower the starting lineup could potentially have. Gordon is a great shot-blocker and passer as well. Expectations are high, but all he needs to do is provide strong defense inside and he will be an important player this year for Colorado.

Thomas is another long forward, but differs from Gordon in many ways. He's a tremendous shooter and has developed some ball-handling skills and a decent perimeter game. He has shown rebounding ability, but will likely struggle on the defensive side of the ball during the beginning of the season. Like all freshman, Thomas needs improvement, but he should be able to help Tad Boyle off the bench or in the starting unit right away.

Fletcher, ranked 143rd in the Rivals 150, is an athletic player from Washington who can defend multiple positions on the floor. He brings another left-handed presence to Tad Boyle's roster and should be able to provide minutes off the bench spelling Xavier Johnson. Although Fletcher isn't yet a dynamic offensive threat, he can shoot the ball and finish in transition. He's a prototypical Boyle recruit able to play and defend almost any position on the court.

Hopkins, ranked 119th in the Rivals 150, possesses the size and skill to play both guard positions and will be able to complement Askia Booker and Spencer Dinwiddie off the bench along with Xavier Talton to provide depth in Tad Boyle's backcourt. Hopkins is extremely athletic and can finish in transition. He is a good ball handler and explosive enough to dunk in traffic. He needs to work on his shot, but he will make an impact this year for the Buffs. A backcourt of the 6-foot-5 Hopkins and 6-foot-6 Dinwiddie could cause potential problems for many backcourts in the Pac-12.

King, who was signed late in the recruiting period, will likely have the least impact out of the five new players. King is a good player, but hasn't been better than many new faces on the roster and the Buffs won't be relying on him for much. He can play shooting guard or small forward and can defend as well.

There's not too much to say about this duo except for the fact that when they are in the game, it's usually when Colorado is blowing out the other team. The Coors Event Center goes crazy for Ben Mills, while his best attribute remains the fact that he can give his team five fouls. Gamble is another fan favorite who won't see much action. He is an important player in practice, but if he plays meaningful minutes in a game this year, it'll likely be because of the scoreboard.

Final Word:
Going into tomorrow's game against Baylor, the Buffs are nowhere near a perfect team, but will be difficult to beat. Spencer Dinwiddie has now asserted himself as the best player on this team and possibly the best player in the conference. The returning sophomore combination of Xavier Johnson and Josh Scott will provide the necessary secondary scoring this team missed last year. There are defensive woes, especially inside, and this roster is filled with youth. But from top to bottom, there is more talent on this roster than any other team Tad Boyle has had. They have more depth than last year and can cause many problems for opposing defenses. If Colorado can produce consistently on offense in the half-court and and remain strong defensively as they have in years past, the season should end up with another NCAA Tournament berth and a possibility of playing in the Sweet Sixteen.
Prediction: Colorado 2013-14 Record: 21-10 (10-3 non-conference) (11-7 4th in Pac-12)