Sorry this is coming so late, but I've been busy and also sick, but mostly super lazy.

First, an introduction to lacrosse, for those of you who are unfamiliar with the sport, or didn't see those episodes of The OC when Kaitlin Cooper introduced us to the term "lacrossetitutes." Lacrosse is kind of like a cross between hockey and ultimate frisbee, if that makes sense (it likely does not makes sense). How about this- it's 20 guys running around trying to knock each other unconscious and beat each other with metal sticks and maybe score some goals. Sports! Originally, it was played by up to 1,000 people at a time on a field that stretched for miles. And there were no goals. So this is an improvement from that respect. Anyhow, on to the recap. 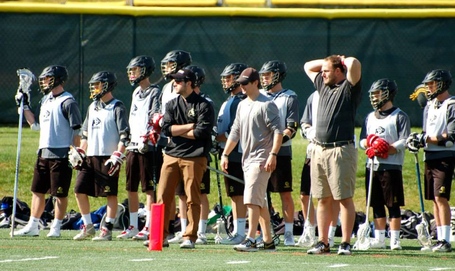 (psst-my brother is 3rd from the left)

To be honest, it was really weird to be driving out of Boulder on a football game day under truly glorious weather. Why would anyone leave that? Well, to go to Greeley of course! I stopped at a truck stop in Longmont to grab a bottle of water, and this particular truck stop had an all you can eat Indian food buffet. I... I just can't imagine an OTR trucker who would trust an all you can eat Indian food buffet in Longmont, CO. That sounds like Russian Roulette with your stomach. But that is not the point. The night I arrived was freezing, so it was quite pleasant to arrive in Greeley wearing only a t-shirt under a clear blue sky, with nary a cattle rendering smell in sniff.

Northern Colorado has a fairly nice campus, and it was cheap to park (on football's parent's weekend) and close enough to the fields. Unfortunately, they do not have a very good lacrosse team. They only have aund 20 players, which is fewer than most good high school squads, but they fought hard. Behind the efforts of mostly freshman, they got run off the field by a score of 14-5 (maybe, it was a few weeks ago). The MVP of the game was clearly Braden Fraser, who grabbed several ground balls and otherwise did not noticeably screw up. Mostly he's MVP because I don't know who any of the other players are. 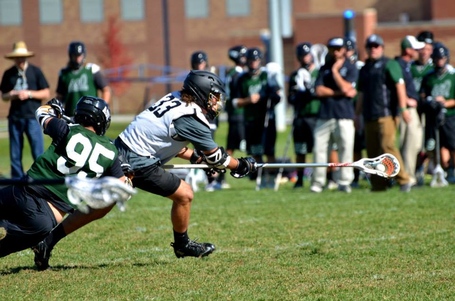 The second game came against Adams State, which is apparently a thing. They're from Alamosa, and no one actually knows where Alamosa is, other than it's somewhere in between some mountains, so it might as well be Colorado's saddest version of Moria, and their lacrosse team, the dwarves. Truth be told, they were a very talented squad- fast, athletic, and tough. In fact, as I discovered later, they're an NCAA Division II team, while we are only MCLA club. The game was chippy throughout, and was played on a truly godawful field, but we eventually prevailed by a score of 10-7 or something like that (again, I'm not going back throug all of my tweets to figure the actual score) The highlights included our #20 on defense, who absolutely trucked some guys, our #33 LSM who is fantastic at face-offs, which is very rare for a long pole, and their Coach, who got a penalty at the end of the game for mouthing off. MVP goes to #20, for making several big hits that made me happy and only got one unsportsmanlike penalty, I think. But a win against an NCAA squad is always valuable, and Adams State beat CSU, so on to the next one... 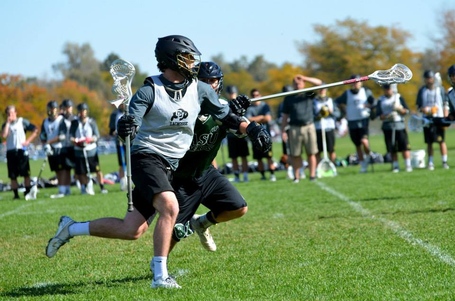 The CSU game started out all bad. CSU and CU are obviously well versed with each other. We both have massive squads, and we both expect excellence. But this was a fall ball game- an opportunity to get better and see what you've got down the line. There were plenty of shifts given to players who would otherwise not see time against such a tough opponent- on both sides. There were SO MANY inexcusable unforced errors- terrible passes, inability to pick up a ground ball, TERRIBLE passes that proved the youth was maybe running a little too hot.  We played backups against UNC, starters against Adams State, and a mix against CSU. I imagine they did likewise. So it's no excuse. But they ran through us, until we made a strong comeback late in the fourth behind the aforementioned LSM who won like 5 straight face-offs. I think the final was like 9-5 or something. MVP goes to the parents who brought the 6 foot Subway sandwiches after. 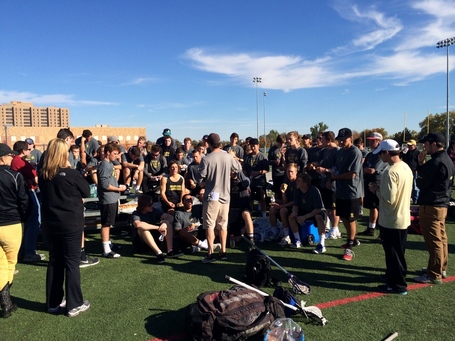 They all smell horrible. Like wet hot fermented garbage.

We finished up 2-1, and I feel like all of our players did good things, but had things to improve. It was a great end to a strong fall for the Buffs, although the work has just begun. Soon, we'll be in Spring, where the rubber hits the road and we see the result of the work that these young men have put in. Tentative Spring opponents (that you've heard of) include Boston College, Texas, Michigan State, Arizona State, Cal, and Stanford, along with conference opponents like Utah, who we're still trying to pretend is a rival in sports, BYU, and...ugh... Colorado State. This is not a program to be taken lightly, but is a team that can use your support. So come out to a game in the Spring! And support the program by clicking your internet over to the CU Men's Lacrosse Apparel Store. You would look very sharp in a unique CU Lacrosse hat, or a hoodie, or some shorts. When I say "or," I mean "and." Also, black is very slimming. Act fast- he store closes on November 2nd!