Despite some inconsistency and struggles on offense, the Buffaloes once again had a successful basketball season for the third straight year. Prior to the start of the season, most didn't know how much stock to put into the two freshmen starters: Josh Scott and Xavier Johnson. However, the Buffaloes knew what they were getting from their best returning player Andre Roberson, and had a reliable backcourt with Spencer Dinwiddie and Askia Booker. Colorado started off on the right note as they got revenge and beat Baylor in the Charleston Classic. After winning the entire tournament thanks to a remarkable performance from tournament MVP Askia Booker, the Buffaloes were ranked in the top 25 and expectations rose to new levels in Boulder. The team that always had a chip on its shoulder under Tad Boyle lost that chip and became a target.

The Buffs prevailed over Air Force, but needed two overtimes to beat an underwhelming Texas Southern team and then fell to Wyoming on the road. After Spencer Dinwiddie scored a career high 29 points in a victory against Colorado State, Kansas absolutely embarrassed Colorado beating them 90-54. Inconsistency plagued the Buffaloes in non-conference play and the start of conference play didn't change that. The Buffs started the conference season off with a heartbreaking loss to Arizona and followed that up with a loss to Arizona St. As the conference season progressed, the Buffs lost to UCLA and Washington, and looked out of sync losing four of their first five conference games. Askia Booker fell into an incredibly long shooting slump and Tad Boyle was never able to find a secondary scorer to complement Spencer Dinwiddie. Colorado swept the Bay Area teams, yet continued to frustrate its fans and lost to Utah on the road.

After road wins against Oregon and Oregon St., Colorado returned home and arguably played its best game of the year as they exacted revenge on another rival, Arizona. After wins over Stanford on the road and Oregon at home, it seemed like the Buffs had their second consecutive NCAA Tournament berth locked up. A loss to Oregon St. at the Coors Event Center hurt their chances, but the Buffs heard their name on Selection Sunday and were scheduled to play Illinois, which would end up being the last game of their season.

Despite being eliminated in the round of 64, the season was still a success and has the Buffaloes primed for another great year. Spencer Dinwiddie represented Team USA this offseason in the World University Games and is now without question the Buffaloes' best player. Xavier Johnson returns as a reliable three-point shooter and complements that with inside rebounding and scoring while Josh Scott provides a necessary back-to-the-basket game and has the ability to grab offensive rebounds. It's hard to believe that Askia Booker will fall into another season long shooting slump again, so more production is expected from the third year player. Xavier Talton started off last year slowly, but he finished the season as a defensive pest and should be improved offensively. 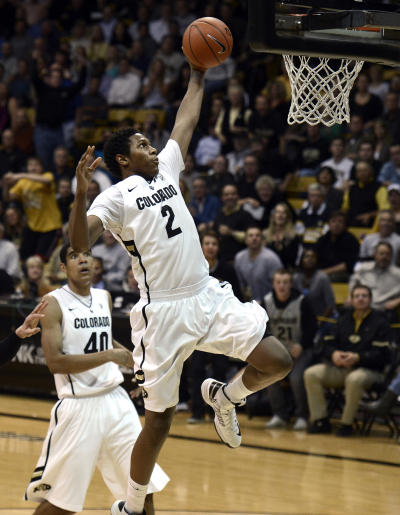 Xavier Johnson's ability to score inside and out was a major reason the Buffaloes had success last year.

With two redshirt freshmen, Chris Jenkins and Wesley Gordon, and four true freshmen, Dustin Thomas, Jaron Hopkins, Tre'Shaun Fletcher, and George King, the Buffs have more depth than last year. The Pac-12 will be more challenging top to bottom this year, and until the consistency issues get solved, the Buffs will still have problems. However, Tad Boyle's teams have improved every year he has been at Boulder and that pattern shouldn't change this year. Although Andre Roberson and Sabatino Chen will be missed, with the current roster, the Buffaloes are in position to make the NCAA Tournament for the third straight year. Playing late into March is no longer a surprise, but rather an expectation in Boulder.