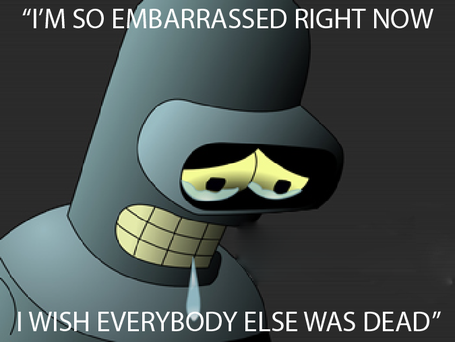 Sad Bender via... Quote from that one episode...

Eric Bieniemy might be relatively new to his role as an offensive coordinator, but he's wise enough and up-front enough to recognize if a do-over was possible he'd go for it. Two days after calling for a rollout pass on fourth-and-less-than-one at the Colorado State goal line, Bieniemy conceded he should have called for his Colorado offense to run the ball. "At the end of the day you always want to run it," Bieniemy said Monday. "If I woulda, shoulda, coulda . . . yeah, in hindsight we should have buckled up, knuckled down and run the ball."

"The young guys played well, with this being their first game," coach Jon Embree said. "We will just keep feeding them to the fire."

"I was getting the jitters," Kenneth Crawley said of his first punt return. After the game, he admitted that he was a little nervous after CSU went three-and-out on their first drive. "I was kind of nervous at first, but I was able to get that out of the way in the first back and come back strong."

Buffs Off To Best Start in Soccer History - CUBuffs.com - Official Athletics Web site of the University of Colorado

The Buffs are off to their best start in program history. After tying Northwestern 2-2 in their first ever meeting, Colorado's record moves to 3-0-2, marking the first time the team has remained undefeated through its first five games. Colorado head coach Danny Sanchez is pleased by his team's performance in the beginning of the season, but hopes in the future the team will avoid getting down 2-0 fifteen minutes into games.

After the jump is a football-team train-wreck that ISN'T the Buffs...

TURN OFF THE GODDAMNED SMOKE MACHINE. There is no finer image from week one. Frankly, we're shocked this doesn't happen more often. Please note that Mississippi State won their game handily, so maybe the Dawgpile will become America's newest and most celebrated team entrance. ["Enter Sandman" plays] [everyone runs into enormous pile]

12. Colorado: Colorado State looked like a game that was a must-win for bowl hopes. So those hopes took a major hit, as the Rams asserted themselves in the second half and seemed to physically handle the Buffaloes on both sides of the ball.

Positives from the CSU loss Lost in the agony of the 22-17 loss to Colorado State in the Rocky Mountain Showdown were some positives, at least statistically.

On Thursday night, Jon Embree did a calendar check for his Colorado football team...

The Buffs have five games in September - "Almost half of our schedule," Embree emphatically pointed out. "We can't afford to come out and (BS) around, mess around in the first quarter . . . five games in September; we've got to get going early." A day and a half later, with Denver's Sept. 1 temperature hitting 94, Embree's words on Thursday night had apparently dried up and blown elsewhere.

After a timeout to talk strategy and get its "punt safe" returner - D.D. Goodson - in place, Goodson muffed the punt and gave CSU a first down at the CU 20. First play, Garrett Grayson hit Dominique Vinson for a touchdown. The PAT was blocked, but CU's 14-3 advantage was now 14-9 - and the Buffs' edge was dulling. Goodson explained the muff like this: "I was back there - it was punt safe. I was supposed to secure it, look it in, make sure that I caught it. Instead, I tried to catch it and run."

Answers to Colorado's troubles in the running game are proving more elusive than Buffs' running backs. For the second consecutive year, CU started the college football season with a dreadful performance on the ground, gaining just 58 yards on 29 carries Saturday against a Colorado State defense that had lost its best defensive players in the offseason.

To be fair, while the offensive line is considered the strength of the CU offense, three of its members -- Daniel Munyer, Jack Harris and Alexander Lewis -- didn't play a lot last season. Munyer was on the field in 2011 for 205 snaps, Harris for 109 snaps and Lewis for 48. The Buffs have also made some changes to the way they play offense this season, the biggest change being a no-huddle offense on a fulltime basis.

"He's a good player and I have to give him that. Hopefully I just keep working and get better and one day I'll be the starter." Embree said Wright has shown good things in practice, thanks in part Crawley and Henderson, who started 12 of 13 games a year ago.