We're going to look at a running play that was unusual for the Buffaloes in this game, in that it worked pretty well. It was the most successful run all day by Tony Jones and one of the biggest gains all day by the Buffs on the ground. I'm trying to make it sound more impressive than it was, because it was only for 8 yards, but basically, our offense didn't do a whole lot that was impressive for me to dissect in this game. It was pretty vanilla overall, and perhaps the most exciting playcall all game was negated by a Gerald Thomas drop early in the game. But anyway, lets see what Mr. Jones did this time that worked, and what prevented it from being an even longer run. Also, forgive me for the lack of annotation on the images. It's my first time putting one of these together like this. I'll improve as the season goes on!

Follow the jump to see just how bad I am at adding circles to pictures on my computer!

As you can see below, we're lined up with Tony Jones as the lone tailback, two receivers split left, Nick Kasa (circled in red) as the traditional, on-the-line Y Tight End, and a Reciver flanking him at the bottom of the screen. The offensive line will be zone blocking to the left, which essentially means each guy is responsible for the space to his left shoulder. Nick Kasa is responsible for that last defender there on the line, and we'll see later how his ability to block him effects the outcome of this run. 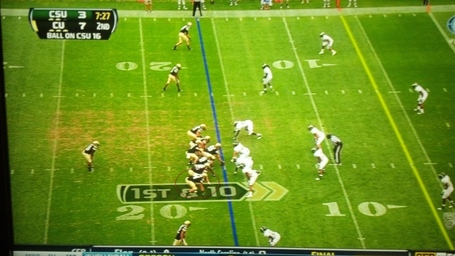 At the snap, Jones and the Line all start to the left, which will take the CSU defense that direction. This includes Kasa. Keep your eye on him. 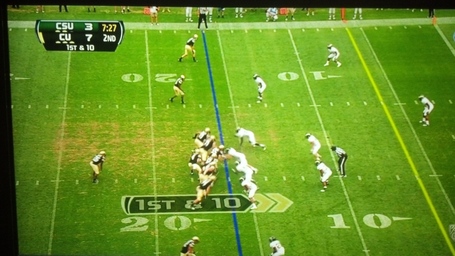 Now you can see the moment when Jones cuts back towards the hole. You can see the CSU linebackers all running the direction that Jones has been heading. Nick Kasa is now inside the CSU defender tasked with keeping an eye on the backside of the defense. You can see the hole that has opened up between Kasa and Jack Harris, the right tackle. This is one of the few times all game that Jones hits an open hole. 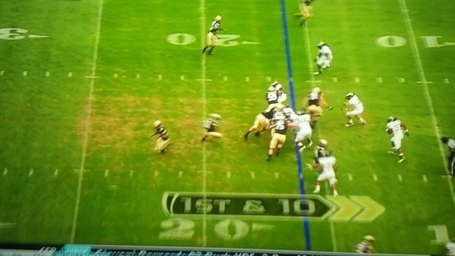 What you see below is Jones hitting the hole at full speed. The linebacker who would be in position to make the play is trying to change direction, but he ends up being just to far outside to make the play by himself. And you can see Kasa working on Cory James, the CSU defender. Kasa can't sustain the block, and James is able to get to Jones and make the play. Otherwise, Jones would've gotten to the first down line possibly with the opportunity to make a move on the safeties, giving him the chance to pick up even more yards. Even so, the misdirection here allowed Jones to have his longest run of the day against the CSU defense, and the second longest run by a RB all day for us. 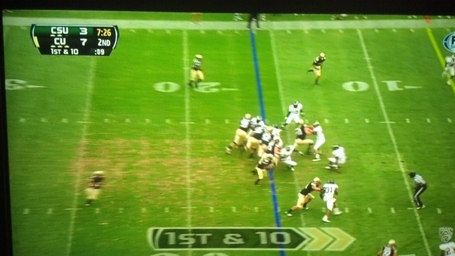 As I said earlier, I'll do a better job marking up the pictures for the next one. And hopefully, there will be more interesting and exciting plays for me to break down for us!