If you buy something from an SB Nation link, Vox Media may earn a commission. See our ethics statement.

Share All sharing options for: Buffaloes History Through Pocket Schedules: The 1990's

Part 6 of a multi-part series; we have a retrospective of Colorado Buffaloes football seasons via pocket schedules. This edition covers Buffs Football during the awesome 1990's. Images courtesy of Matthew Robins @BupsJones, a fellow Buff and avid pocket schedule collector. If you have CU Sports Papergoods, I believe he would like a tweet with you. Story brought to you by the Ralphie Report and the preseason football August Blitz.

You already know what's going to happen; so I'm going to tell you why it shouldn't have. 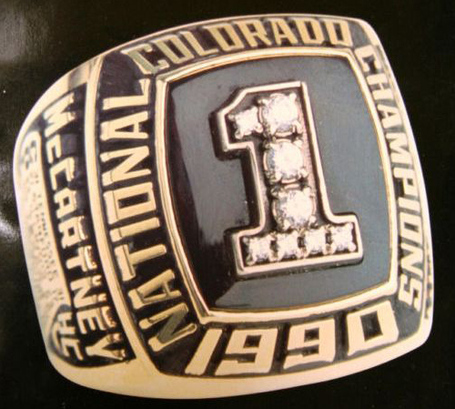 Nobody's going to argue that in 1989 we steamrolled through our regular season schedule. The average point difference was 27 points in the Buffs' favor. There was no question which team had the best regular season because there was only one team undefeated by season's end: Colorado. Then that world killer team lost (some say) their momentum between November 18th and January 1st, and lost the game.

The 1990 season is a completely different story. How hard can next's years schedule be? How about impossibly, hatefully difficult? Six of CU's regular season opponents ended the regular season ranked in the Top-20, and four of them won their conferences. FOUR! (Tennessee, Illinois, Texas, Washington).

I'm still not getting my point across...Look at what Bill McCartney said this about the 1990 Schedule:

When your coach says he wants to 're-identify our goals' mid-season; you know it's going to get rough. 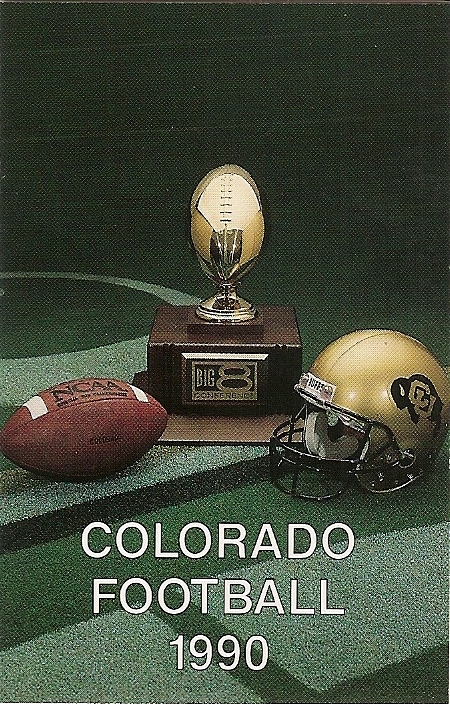 It's really no wonder so many of our games required last-minute heroics to win. The 1990 pre-season AP poll had Colorado ranked 5th. In a single season we lost and regained all of that and more, here's how:

Against #8 Tennessee we gave up a 14 point lead to tie our opener in Anaheim. Tennessee won the SEC. Their losses? Alabama and Notre Dame. This game was the first time since 1984 that a team had put more than 500 yards on CU. Stanford at home required Eric Bieniemy running over the top in the waning seconds to get our first win. That Stanford team that went 5-6? Yeah, they later beat Notre Dame. But in September 1-0-1 was unimpressive, and Colorado fell to #9, behind #8 Nebraska. Defending National Champion Miami? They were upset by BYU and the eventual Heisman Trophy winner Ty Detmer.

Then, despite leading most of the game, Colorado lost at #21 Illinois on the last drive. Illinois won the Big Ten. The now #20 Buffaloes faced the #22 Texas Longhorns, and down in the fourth in Austin, Eric Bieniemy again rallied our team; first with his famous eloquence to bolster the defense, then with his third touchdown of the game to beat Texas. Texas is pivotal in our story, because later in the season they beat Houston when they really shouldn't have. 1990 was supposed to be the University of Houston's year; they'd even won the Heisman trophy the year before. Texas, however, hadn't beat Houston in three years and was skidding on two losing seasons. But in 1990, #14 Texas beat undefeated #3 Houston. Houston didn't lose any other games, and otherwise would have outranked Colorado all season long were it not for that loss. Texas didn't lose any other regular season games, and won the Southwest Conference.

Washington shut out and dismantled #5 USC before coming to Boulder, where it took us all four quarters for #20 Colorado to eventually beat the #12 Huskies. UW won the Pac-10 that year. he heroics required the next week against Mizzou are well documented, suffice it to say that it took all four quarters and then some for us to prove victorious. 4 of our 10 regular season wins didn't require heroics that year, but in spite of that Colorado still went undefeated in conference play, and CU won the Big 8...again.

To get there though, #9 Colorado first had to go on the road to play #3 Nebraska. The Buffs plight in that game, "down 12 with 12 minutes to go," is probably more familiar to y'all, as is Eric Bieniemy's four touchdowns against Nebraska. Finally Colorado came from behind to win, and for once putting the hurt on our long-time tormentors.

By the end of the regular season, Alfred Williams had won the Butkus award, and had repeated as one of our three All-Americans, along with Joe Garten and Eric Bieniemy. CU had three players receiving points in the Heisman balloting, Bieniemy at 3rd, Darian Hagan 17th, and Mike Pritchard 50th.

If you haven't seen our victory in the Orange Bowl, you should watch it. It's great. It's like watching the Titanic, except we're the iceberg. It has all the suspense of a 10-9 football game, even though you already know the outcome. If you haven't seen it, I won't spoil the drama of it; just go watch. 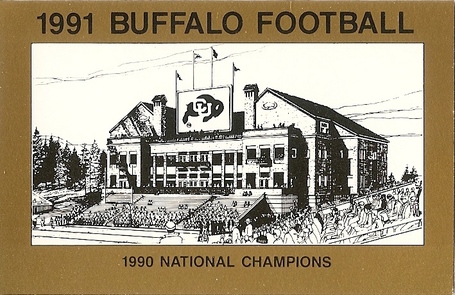 "Hello, Mr. Architect? Ed Crowder here. That new athletic center we're building? We want to put it on the cover of the pocket schedules, but it's April, and apparently buildings aren't built in a month. A rendering, you say? Perfect!"

In the 1991 preseason AP poll, Colorado was ranked #13. None of this 'honorary #1' crap. Four of the teams we'd beat the year before were ranked ahead of us... and for apparently good reason. We split our non-conference schedule, easily beating Wyoming (4-6-1) and Minnesota (2-9) but losing close games to Baylor (8-4) and Stanford (8-4).

We managed a comeback to upset #12 Oklahoma on the back of two 99-yard drives, to re-enter the polls, but struggled against the ordinarily awful Kansas State Wildcats, winning 10-0. The Buffs won every other Big8 game except for the Nebraska game. We tied the Huskers 19-19 in the freezing cold and split the Big8 Championship with them. 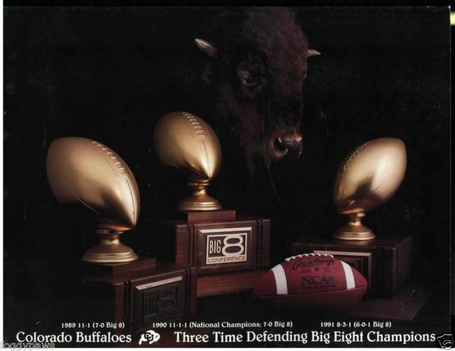 The Buffs went to the the Blockbuster bowl in Miami, and brought their new offense with them. Coach Mac had decided that a single-back offense is what Colorado should have, and decided to spend November and December installing it. The Buffs played well in the new system (the 62 yard TD pass from Darian Hagan to Michael Westbrook was a CU bowl record!), but ultimately lost to Alabama, 25-30. 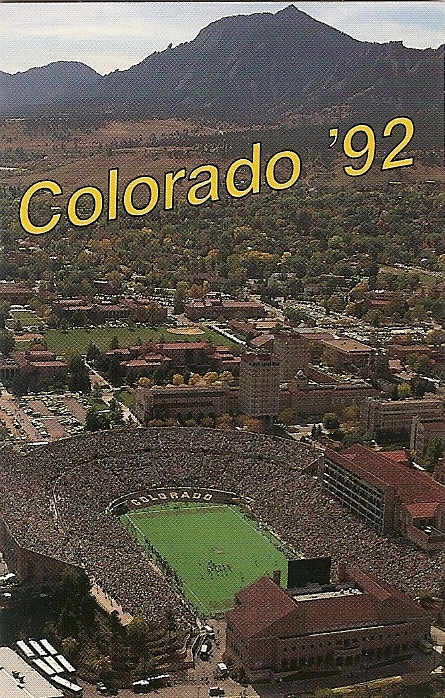 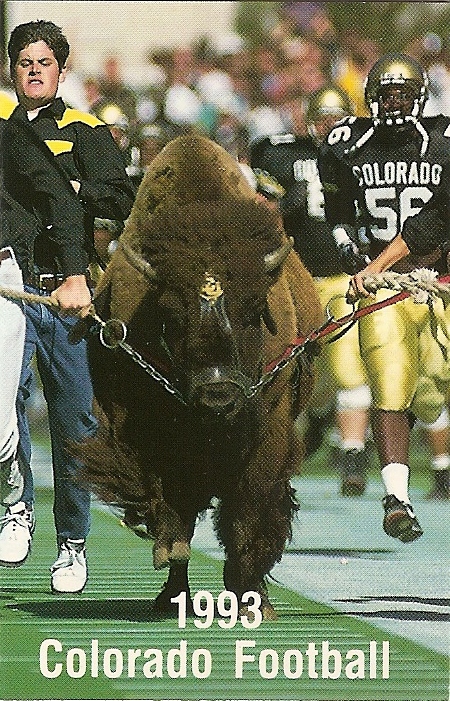 With Colorado listing All-Americans like WR Michael Westbrook, CB Deon Figures, and P Mitch Berger, in 1992 you'd think that Colorado was back in business with the 'Air-Attack' offense. Well, you'd be partly right. We were back to winning most of our games (9-1-1 regular season) while losing to #8 Nebraska's bulldozers, this time 7-52. Freshman Koy Detmer filled in when starter slinger Kordell Stewart was hurt, but the offense was hit-or-miss. We beat (7-5) Baylor 57-38 and (3-8) Missouri 6-0. The 10th ranked Buffaloes lost the Fiesta Bowl to 6th ranked Syracuse 26-22 to finish the 1992 season.

In 1993, the Buffs took on the most difficult schedule in the nation, and slipped a little. CU started the season slow, beat a good #9 Oklahoma team but still couldn't quite beat #6 Nebraska, losing 17-21. Our tie with ascendant K-State set our regular season record at 7-3-1 before winning a passing shootout in the Aloha bowl against Fresno State and Trent Dilfer. '93 was the one year in the whole decade that Colorado failed to post a consensus All-American. 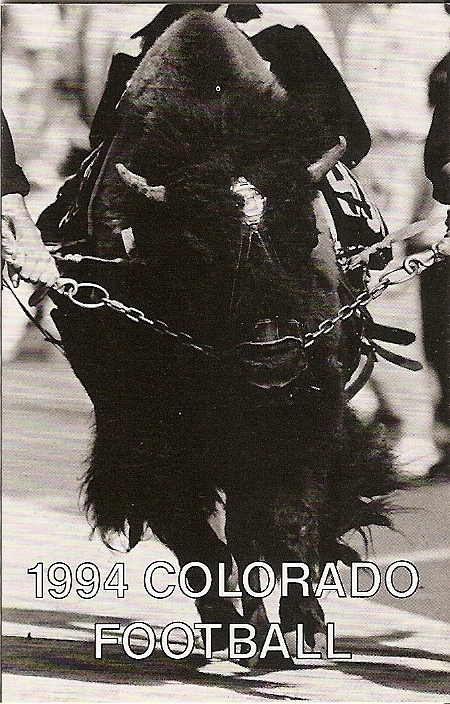 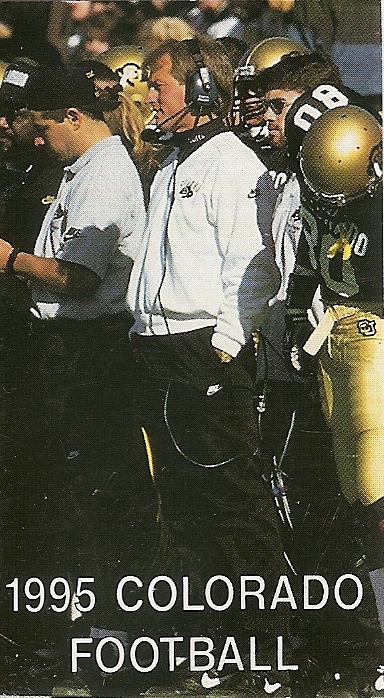 The last two years of the Big8 were some of Colorado's strongest in the '90's, and if it weren't for Nebraska, we probably would have won another national championship, and possibly could have won two (as they did). These seasons had Colorado going 11-1 and 10-2, with easy bowl victories on big stages against Notre Dame and Oregon.

But despite having superb teams and Rashaan Salaam winning the Heisman trophy in 1994, Colorado never really got close to the Huskers, losing 7-24 and 21-44.

Still though, next to the national champion team, Bill McCartney's last team and Rick Neuheisal's first team generated a lot of memories for Buffs fans. 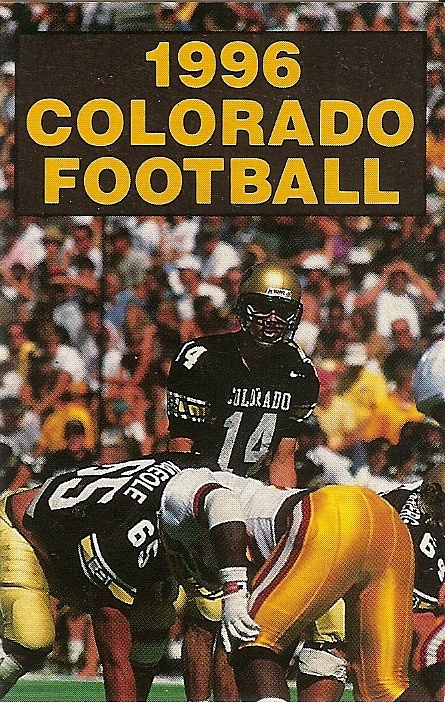 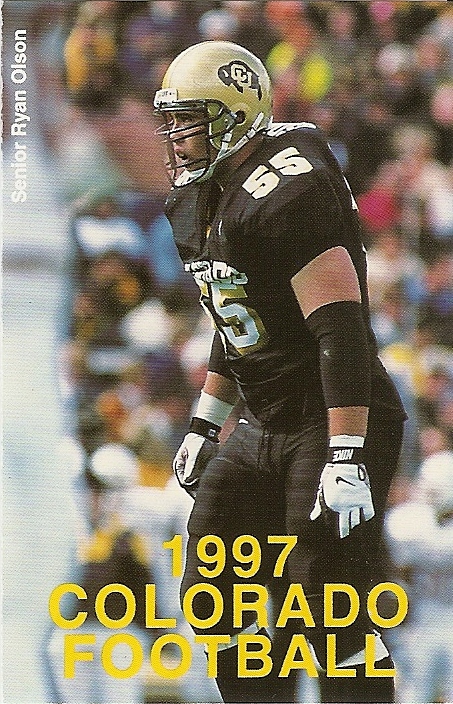 It's crazy to think that one year CU was 10-2, winning the Holiday bowl and 5 points away from beating Nebraska, and the next CU was 5-6 and 5 points away from an even points-for/points-against differential (and only beating Wyoming by 1). But that's what was happening by 1997 with Neuheisal around. The 5 wins were later forfeit due to the participation of an ineligible player. Thanks Rick! We did come within 3 points of beating the eventual national champion Cornhuskers, losing 24-27 in heartbreaking fashion that gone from being a habit to being a curse. 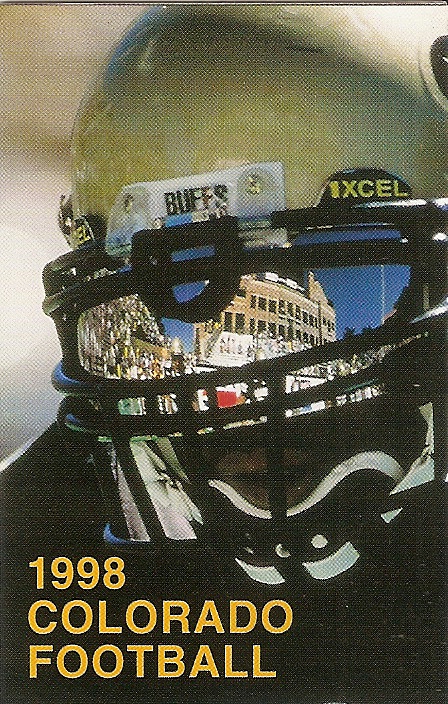 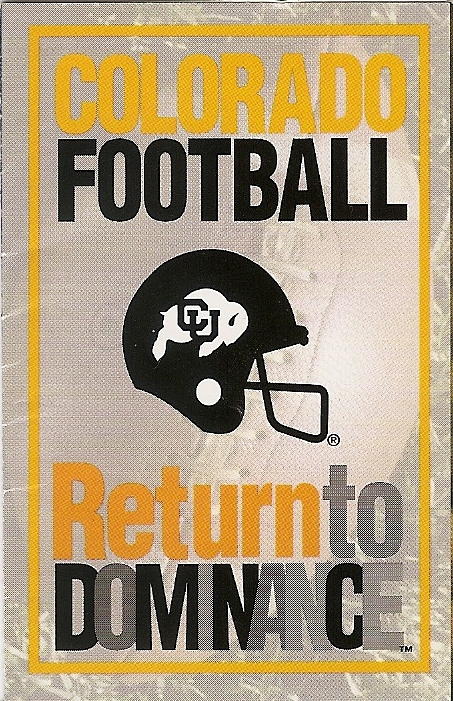 Slick Rick's last year had us beating the bad State's (Colorado State, Fresno State, Utah State) but not the good State's (Kansas State, Kansas). He did manage to lose to Nebraska by an even smaller margin, 14-16 on the now annual after-thanksgiving game, and to squeak out a win in the Aloha bowl against Oregon 51-43 to finish with an 8-4 record.

Gary Barnett's first year in Boulder closely resembles Neuheisal's characteristic years. 7-5, lost to K-State and Nebraska, beat the crap out of BC in the Insight.com bowl. That shouldn't be too surprising though; because it takes a couple of years to resurrect a power rushing game and make good on the promise to 'Return to Dominance.'

Part seven concludes the series and brings us back to present day...