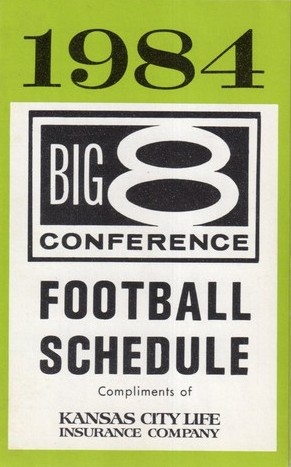 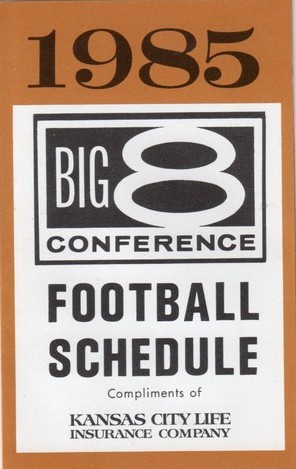 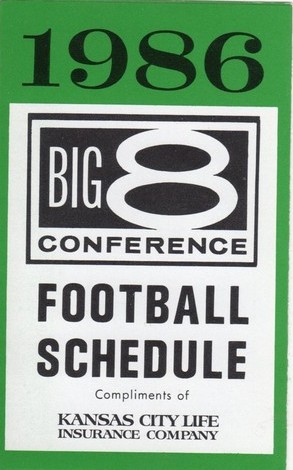 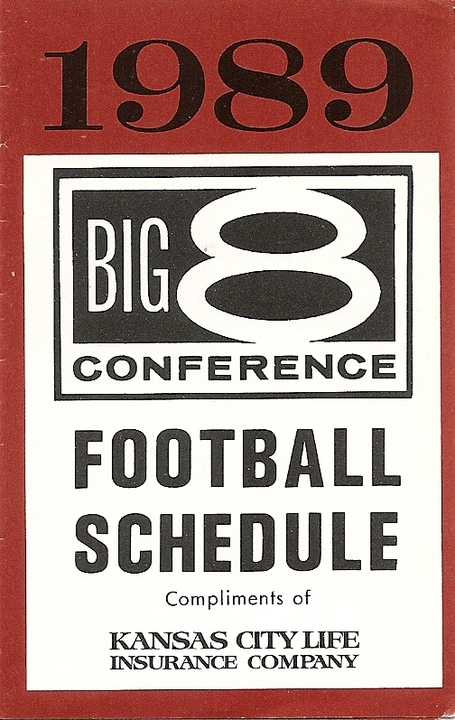 Part 5 of a multi-part series; we have a retrospective of Colorado Buffaloes football seasons via pocket schedules. This edition covers Buffs Football during the pivotal 1980's. Images courtesy of Matthew Robins @BupsJones, a fellow Buff and avid pocket schedule collector. If you have CU Sports Papergoods, I believe he would like a tweet with you. Story brought to you by the Ralphie Report and the preseason football August Blitz.

The late 1980's really encapsulate the ascendant Buffaloes; they're back in black and are beginning to win games. Before long they're going to win an important game, they might even finally beat Nebraska, and the only place to go from there is to win all the games. 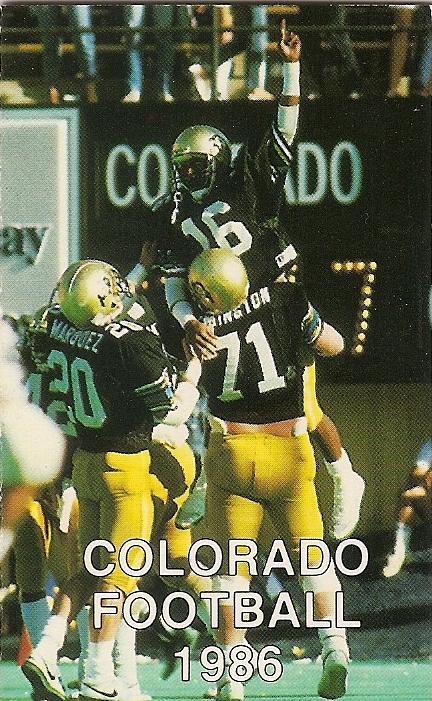 Colorado was in the second year of their 'wishbone experiment,' and expectations were high. When you win 7 regular season games for the first time in 8 years, all your assistant coaches remain at the program, and the rushing game went from last nationally to 9th, people get excited. They also tend to overlook that 9 of your 111 players are upperclassmen.

Colorado's '86 schedule was identical to the year before, opening with CSU, Oregon, Ohio St, and Arizona before running the Big8 gauntlet. Coach Mac had gone 3-1 to start 1985, so when the Buffs skidded into the Mizzou game 0-4, people were worried.

"I'm going to have to die to get better." said Coach Mac after the heartbreaking last-second loss to Oregon, 30-32...

At Mizzou, the bulwark of the team, Colorado's defense, woke up, and the Buffs got their first win 17-12. Trick plays and able running from quarterback Mark Hatcher concealed the offense's 4 turnovers. On bizarro day in '86, the 4-1 Cyclones arrived to play the 1-4 Buffaloes, and Iowa St. was hammered 31-3. Now for Nebraska.

It's October (NOT November, that doesn't start until the BigXII days), and Nebraska arrives in Boulder ranked 3rd in the country. The average score of their first six wins: 41-16, ours...not so much. They creamed teams (Oregon, Missouri) that we were barely matching. We hadn't beat the Cornhuskers since 1967, and not at home since 1960. It's no wonder, as the Nebraska games in Boulder are as red as a Husker home game, and had been for over a decade.

The Buffs have punted and flailed for most of the first quarter, and thanks to incompetent Husker punting now sit at 2-13 on the Neb. 39:

The fourth quarter opened with Colorado clinging to a 10-7 lead; and Mac had played conservative all game. Runs up the middle, lead blocking, and still CU had given away turnovers...

Colorado actually beat Nebraska. The final score, 20-10, was left shining on the scoreboard during that whole Halloween weekend. Everyone points to this game being the breaking point when Coach Mac's famous mantra of "belief without evidence" was no longer required: the evidence was there on the field.

Colorado went on to a 6-5 regular season record, returned to the Bluebonnet Bowl in Houston to lose to 9-3 Baylor. But all the doubters (they weren't haters yet, that comes in the 00's) had seen that the impossible could be done.

Nebraska could be beaten. 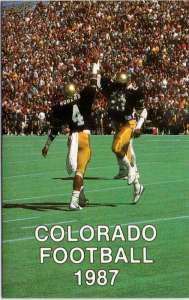 The '87 season is a funny one. Oklahoma and Nebraska sat atop the preseason rankings, #1 and #2. The Big8 continued to be 'the Big 2 and the Little 6.' Expectations were again high, and Colorado again faltered, losing the season opener to Oregon, 7-10.

The Buffs won against the bad teams, Stanford, Wazzu, CSU; and lost to the teams with double-digit wins, OU, Nebraska, Oklahoma St. And far from usurping the 'Big 2' failed to even be number 3.

The visit of #1 OU was the ninth time in team history the Buffs had faced a number 1 team; but it didn't happen again until 2003 (we lost that one, too). Colorado had a 7-3 record when bowl game invitations went out, with the Nebraska game still to play. Colorado did not receive an invite though, and wound up losing the 'Folsom Bowl' to Nebraska, 7-24, who just weeks before would have been playing for the National Championship were it not for Oklahoma's upset in Lincoln. 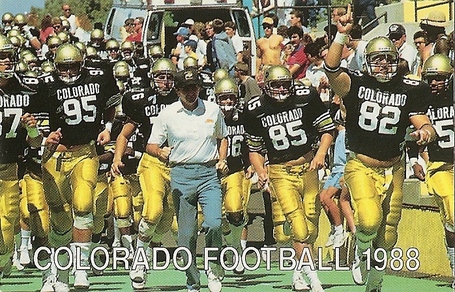 In the last three years, our only All-Americans have been our punters, but Colorado still remained hopeful that they could break the top 20 (the national rankings at the time ended there) and garner national attention. Colorado's version of the wishbone had evolved into an I-formation which was colloquially called 'the I-bone.'

For once Colorado opened the season well, beating eventual PCAA champion Fresno state 45-3. Sadly, no one showed up to watch. The Buffs next game became their first road win against a ranked opponent since 1979. The victory came against #19 Iowa, with the 24-21coming on the power running duo of QB Sal Aunese and RB Eric Bieniemy.

Exiting non-conference play 4-0, Colorado lost again to Barry Sanders, who happened to be wearing an Okie State jersey. The first night game at Folsom had Colorado aaaaaaaalmost beating OU, but ultimately losing 14-17. Upon beating Missouri 45-8 to rise to a 7-2 record. The Mizzou game was Eric Bieniemy's 7th game with 100yds rushing on the season. After that win, Colorado was nationally ranked for the first time since 1978 at #19, just in time to lose to Nebraska, losing 0-7 in Colorado's last scoreless outing until you-know-who in 2008. Twenty years. Just sayin'.

Unlike '87, the Buffs received an invitation to a bowl, this time returning to the Freedom Bowl to face BYU. The Cougars had also returned to the rankings that season, and never led the Buffaloes until the final score. CU lost with the same agonizing score of 17-20 that they lost their other Freedom bowl against UW in 1985. Finishing 8-4 was both an improvement and a disappointment; people felt the Oklahoma, Nebraska, and BYU losses could have and should have gone the other way, and the players agreed.

For 10 of the last 11 seasons, the Big 8 Champion had gone undefeated in conference play. This year it was Nebraska, and most of the years before it was Oklahoma. But next year would be different. 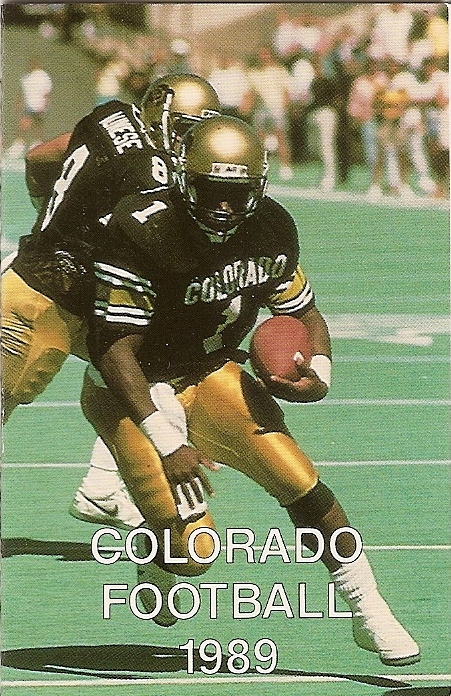 In the spring, hopes were very high for the Buffaloes, who were returning 18 starters and ranked #14 in the AP preseason poll. Hopes that vanished when everyone learned that Buffs quarterback Sal Aunese had a bizarre and life threatening stomach cancer. Aunese immediately began treatment and Darian Hagan was named the new starter.

Colorado opened up the season blasting their opponents, starting with beating Texas 27-6. On the second play of that opening game, Hagan burst for 75 yards to set up a Bieniemy touchdown. Colorado then beat CSU 45-20 and #10 Illinois 38-7, outgaining the Illini 475 yards to 193 and climbing to #6 in the AP poll.

The following Saturday Sal Aunese died, and the team dedicated the rest of the season to his memory. He was called the "heart and soul of the Buffaloes" and would lead them as an honorary captain through the rest of the season. The Buffaloes had only a week to confront their loss before traveling to play #21 Washington. The team gathered on the field to honor Sal, pointing at the sky in quiet unison, before pummeling UW 45-28.

The victory that week saw Colorado leapfrog unbeaten Nebraska in the AP poll to arrive at #3 in the country. The Buffs' emotions, 'tenacious D', and four headed rushing attack carried the team to easy victories over Missouri 49-3, Iowa State 52-17, Kansas 49-17, and Oklahoma 20-3; where half of OU's 71 offensive plays amounted to 0 or negative yardage.

The next game was called the 'Game of the Century,' in Boulder at least, as #2 Colorado hosted #3 Nebraska.

Colorado prevailed in the slugfest 27-21, despite underwhelming statistics. Fans stormed the field, the goalposts came down, and Coach Mac called it "the greatest win I've ever been a part of." The win over Nebraska put McCartney's career record at 44-44-1, and secured the Big8 Title for Colorado, the first since 1976, and the first outright since 1961.

CU went on to thrash Okie State 41-17 and Kansas State 59-11 to finish undefeated for the regular season, 11-0 and by November rose to #1 in the AP poll. The Buffs regular season scoring averages are pretty astounding: avg points on offense: 41; avg points on defense: 14.

Darian Hagan placed 5th in Heisman polling, and was the first Buffalo to appear on the list since Charlie Davis in 1971. Coach McCartney won the 'Bear' Bryant award for head coaches, and Colorado had five All-Americans in G Joe Garten, OLB Alfred Williams, OLB Kanavis McGhee, QB Darian Hagan, and P Tom Rouen. It was the first time in a decade with more than one All American, and will have multiple All-Americans for 9 of the next 12 years.

As we've seen thrice already, the Big8 Champion goes straight to the Orange Bowl. This time the Buffaloes faced the defending national champions, #5 Notre Dame. In the first half Colorado gained significant yardage attacking Notre Dame's strength by rushing up the middle, but failed to score points, entering halftime tied 0-0.

Notre Dame's defensive coordinator, Barry Alvarez brought back a defense they hadn't used since the second week of the season against #1 Michigan. Stunts and slashes (diagonal attacks) against our O-Line halted our offense, Hagan scored our only points in the third quarter, and we lost the Orange bowl and our first chance at a national championship 6-21.

Don't worry though, all of those All-Americans we have are coming back next year. And besides, how hard can next year's schedule be?

Part six picks up with the 1990's and the most unlikely of seasons...