Share All sharing options for: Colorado Buffaloes History Through Pocket Schedules: The 1950's 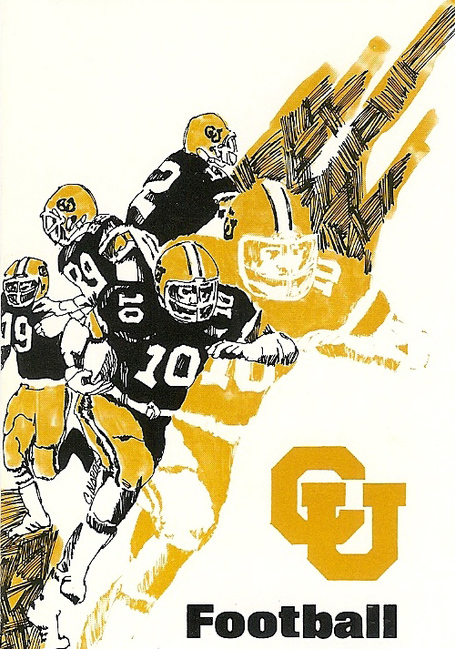 Part 2 of a multi-part series; we have a retrospective of Colorado Buffaloes football seasons via pocket schedules. Images are courtesy of Matthew Robins @BupsJones, a fellow Buff and avid pocket schedule collector. If you have CU Sports Papergoods, I believe he would like a tweet with you. Story brought to you by the Ralphie Report and the preseason football August Blitz.

***This is a special news bulletin from the National Broadcasting Company, brought to you by Esso, the new gasoline. Remember, 'Esso means happy driving.' Now only 20¢ per gallon.***

Senator Joe McCarthy and the House Committee for Un-American activities once again has uncovered lewd and dangerous behaviour in upper echelons of Hollywoodland, California. A dozen actors, actresses, and writers have been connected to various communist organizations, some intend to recruit young people into the ranks of the Red Army, but all are highly dangerous and subversive.

In the White House, President Dwight Eisenhower approved to increase the minimum wage from 75¢ to $1.00. Economists predict this wage to be sufficient for the next 30 or 40 years. The President also expressed an interest in establishing a scheme he calls "The Interstate Highway System" in the next few years. The Firestone company has issued a memorandum in heavy support of this high-way plan.

In International news, Winston Churchill recently resigned the as Prime Minister of Great Britain, citing an insufficient flow of cigars, and also "being 80 ***** years old."

Elsewhere in Europe, the Federal Republic of Germany, the banding together of the British, French, and American occupation zones has received official recognition and diplomatic relations with other Allied countries. These western zones continue to rebuild a peaceful democratic country, with the help and watchful eye of Allied occupational troops.

The Buffs in the Fifties

The Big 7 ultimately unofficially became the Big 8 in 1958 when Oklahoma State finally grew up* and rejoined the conference.

Under coach 'Dal' Dallas Ward (1948-1958), who was a position coach for the legendary (and National Champion) Minnesota teams of the 1940's, the Buffs were a consistent and solid team, ran the Single wing offense well and could regularly be counted on to win 60% of their games.

The man also wore houndstooth and a dress hat on the sidelines, so don't let 'Bama fans make you think they have a monopoly on that. 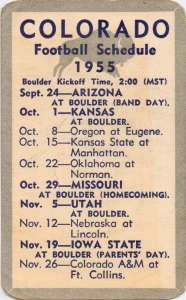 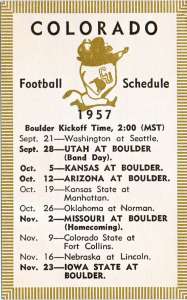 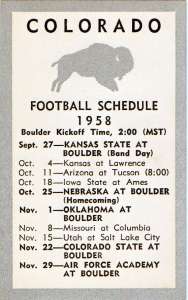 1955 was actually a down year for the Buffaloes, whose final record was 6-4. The Buffs managed to shut out Arizona, Kansas, and Iowa State, but fell to eventual National Champion Oklahoma and then had a letdown the following week against Missouri. Don't fret though; the Buffs took out their frustration against Utah 37-7 the week after.

1956 is the year you want to see, even though the Buffs opened with a loss against Oregon, they went on a tear of a 5-game win streak beginning with a 34-0 win over Kansas State, a 47-7 thumping of Colorado State to avenge the prior year's loss, and finishing up with a 16-0 win over Nebraska, who we beat more often than not during the 50's. You'll notice below that CU was setting up Nebraska as our rival as early as 1956, about 30 years before most people would like you to believe that Coach Mac circled Thanksgiving Friday in Red.

The Buffs were again the only thing* standing in the way of Oklahoma's National Championship, and CU again lost to the undefeated Wagons. The Buffs took their 7-2-1 record (rounded out with wins against Utah and Arizona) to the Orange Bowl for the team's second bowl game, this time in Miami, Florida.

*Perhaps not the only thing

The thing about Colorado in the fifties is that in 1954 Dal Ward decided to recruit African-Americans to play football when most other teams were dismissing the notion outright. In 1956 the Buffs roster has two black players, Frank Clarke WR, and eventual All-American Guard, John Wooten. This 'Classic CU' article Doing the Right Thing article tells the story much better than I can,But Clemson officials said its team would not play Colorado if Clarke and Wooten were on the field.

"Clemson was totally against playing against black players, but our whole team stood together, including the coaches, and said we will go as a team," Wooten said.

Clemson's attitude, though, was only part of the problem.

"Miami Beach was still segregated and the hotel personnel plainly stated they didn't want any Negroes coming down there," Wooten said. "When it became apparent that Colorado wasn't going to back down, the Bal Harbor Hotel tried to reach a compromise. They said that Frank and I would have to stay in the same room and it would be on the top floor of the hotel. Frank and I had never roomed together. We roomed by position. My roommate was Bobby Salerno, and I didn't want to change it. I can't remember who Frank's roommate was, but I know he felt the same way.

"We stood strong. When we went to Miami Beach, we had our usual roommates and it was business as usual. And Clemson did show up at the game and we beat them." 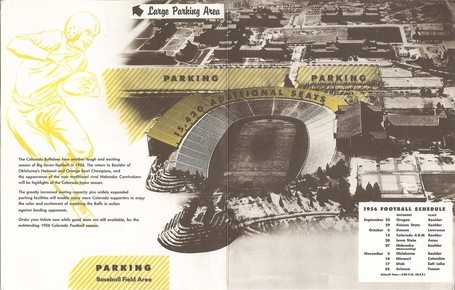 They won an expansion to Folsom Field!

Part three will continue with Buffs in the Sixties, man...