Former Colorado Buffaloes Tyler Hansen, Rodney Stewart and Conrad Obi have joined drafted Buffs Ryan Miller and Toney Clemons in moving on to the NFL as all three have signed various free agent deals. They all knew their destinations very shortly after the completion of the 2012 NFL Draft, but the road to the NFL was not a straight one for Tyler Hansen.

Hansen was the second of the three to announce on twitter that he had signed a deal, but it wasn't to the Cincinnati Bengals. 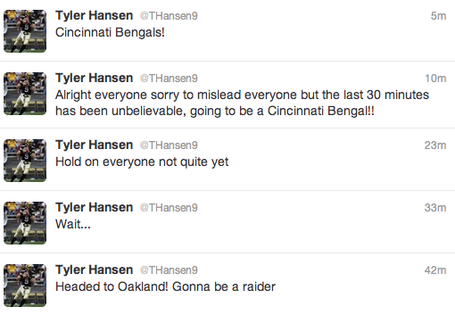 Now, both Tyler and running back Speedy Stewart, an Ohio native, will try and catch on with the Bengals. Hansen will be completing with Bruce Gradkowski and Zac Robinson for the spots behind now entrenched starter Andy Dalton. Speedy may have an even better shot of making the roster in a rag-tag position group that features the likes of Bernard Scott, BenJarvus Green-Ellis, Cedric Peerman and Aaron Brown. Also, joining Stewart is draft pick Dan "Boom" Herron of Ohio State.

Conrad Obi will headed to Arizona to try and catch on with the Cardinals after a strong senior season. Oh, one other signing that you may be interested in... South Florida Bull and former Colorado Buffalo Darrell Scott will try and make the Dallas Cowboys.

Big congrats and best of luck to all the Buffs hoping to grab an NFL roster spot.