ESPN's College Gameday is conducting an online vote to determine on which college campus they'll film a commercial this summer. The results are hilarious and ridiculous.

While I was browsing a certain Colorado-Buffaloes-centric college sports website... let's say it's initials are TRR... dot net. Anyways, I was browsing along and I saw this: 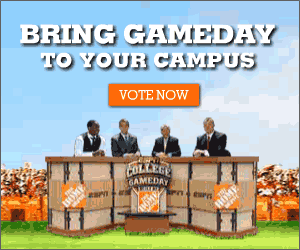 partially blurry and entirely misleading advertisement offering to bring college gameday to my campus in all it's puke-orange glory. College gameday? On my campus!? All I have to do is vote now?!? Awesome!

Turns out the vote is actually to have college gameday film a commercial on your campus during the summer...as in... when there's no football. Or students. Or anything exciting on a college campus. Have you been to a big college campus when regular classes aren't in session? It's like an empty set from Band of Brothers.

I voted anyways. Mostly because I didn't read all that fine print until afterwards. Had I though, I probably would have voted 'University of Houston' to make them film the commercial here in the swamp in the middle of the summer, but whatever. I mean, a vote to affect a real thing, amirite? No...It turns out I am not right.

Any of you even familiar with democracy or the internet already know where this is going.

When I took a look at the leaderboard, most of the schools at the top (Nebraska, VaTech, A&M) seemed plausible... 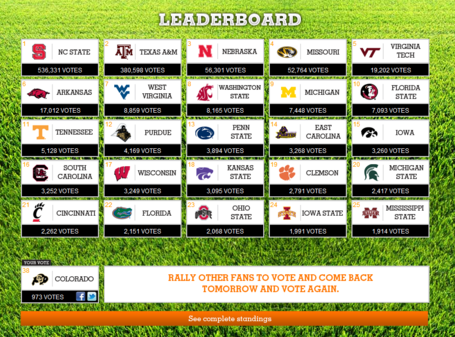 until I realized that N.C. State was in the lead. And they have way too many votes. A&M is there, too. Together they have more than NINE TIMES the number of votes that all the other college football* teams combined.

*Division I-A, what, did you think they were going to go to Appalachian State?

They say there's an art to cheating. That you have to win by only just enough so that no one will notice. NC State? Texas A&M? You're doing it wrong.

And now, because ESPN chose to base a real-life thing on an internet vote, Chris Fowler, Lee Corso, and Kirk Herbstreit have a chance to get stuck in the one place that's hotter than Houston in the summertime; College Station. ESPN? You're doing it wrong, too.