Highlights from the Colorado Buffaloes Pac-12 Tournament victory over Cal, and clips from Twitter on the Buffs victory.

We'll start with C-Unit, our official student cheering section. Mike Bohn totally paid for 50 of them to travel to L.A. for the tournament.

The twitters will break into your house and eat all the nachos...story at 5.

If I were a real news twitter-er, this is the kind of thing you'd get pre-game:

The C-Unit is the fan section of the 21st century: they will heckle you in every way possible

You know what happened next, they did hold on.

And ESPN's started asking the question that we've all been asking for a week: 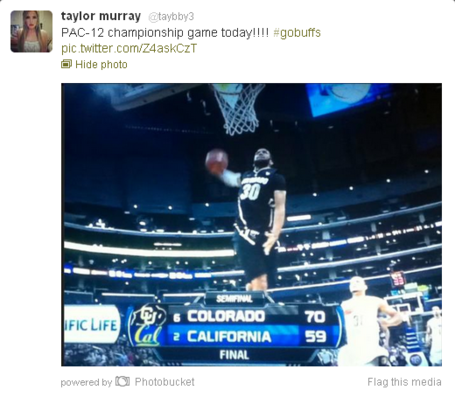 The Buffs-related twitter activity became so intense after the game, that it popped up on the top worldwide trends:

What other posts did y'all enjoy? This may be my favorite: