Share All sharing options for: Colorado Buffaloes History Through Pocket Schedules: The 2000's 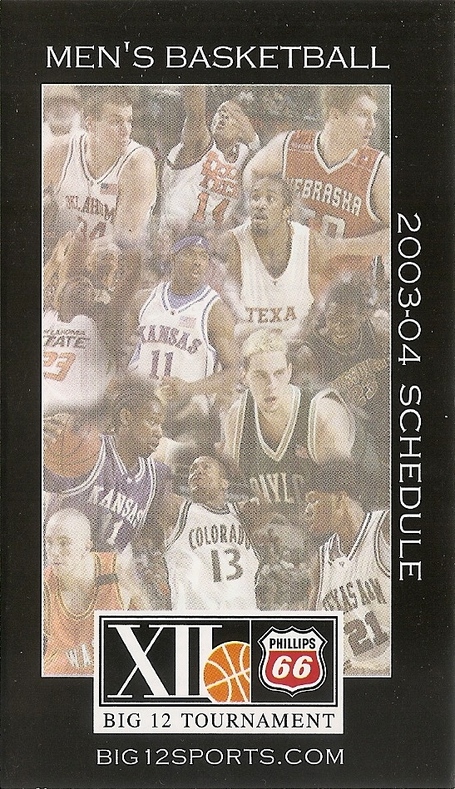 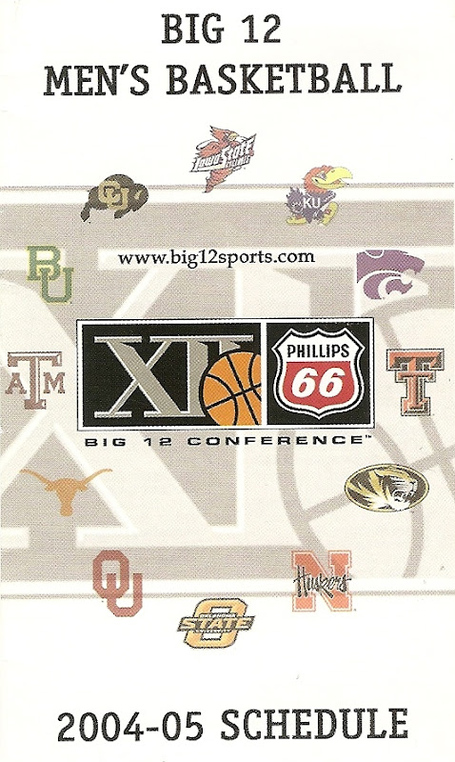 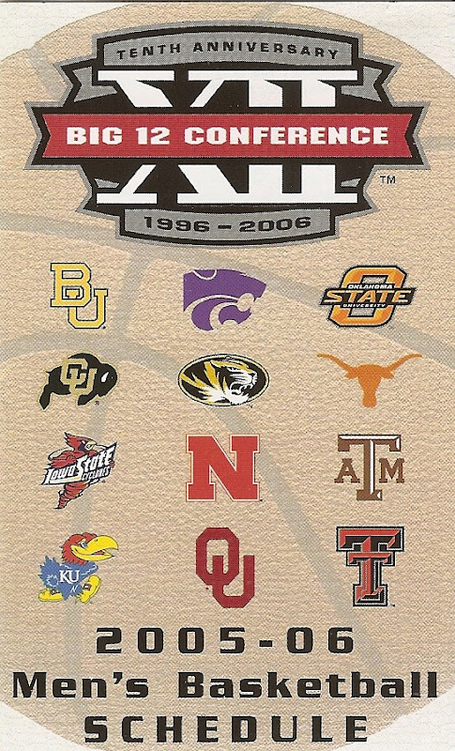 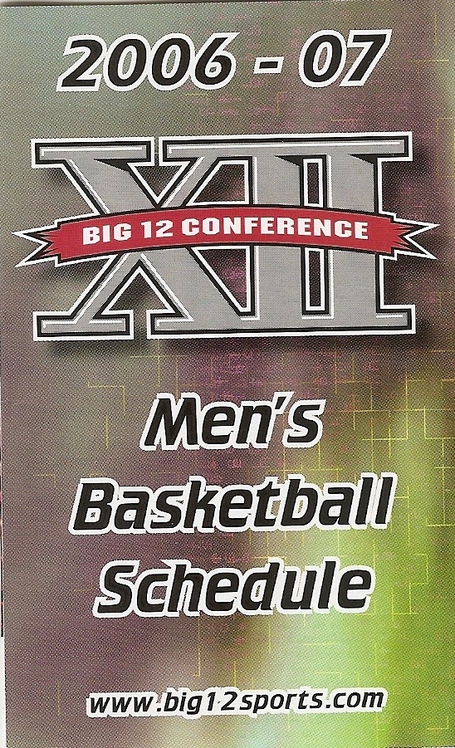 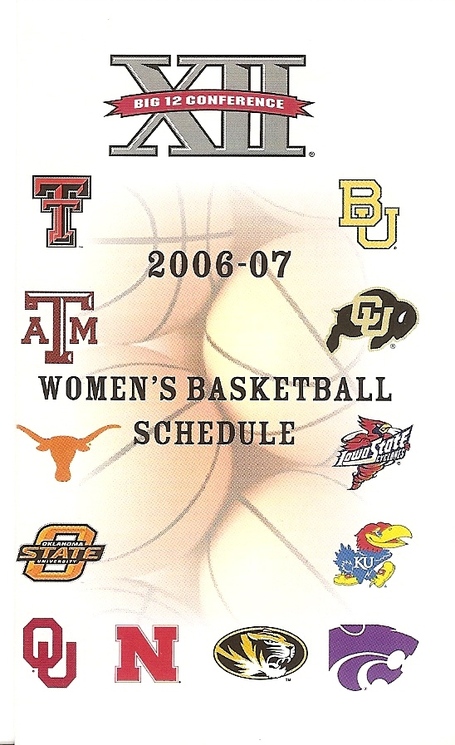 Things were pretty going pretty great for the University of Colorado as we entered a new century. The football team was coming into its own under Head Coach Gary Barnett, the top party school rankings were rolling in annually and basketball was decent, and at times pretty good. It's silly to say that the foundation was laid for what was to come year years later and presently, but the Buffs of the early 2000's had some nice seasons and were led by some talented individuals and a quality head coach, if not, as history will show, one of the Top 5 head coaches the men's program has ever had. So, let's look at the not so ancient history and go to the Pocket Schedules... 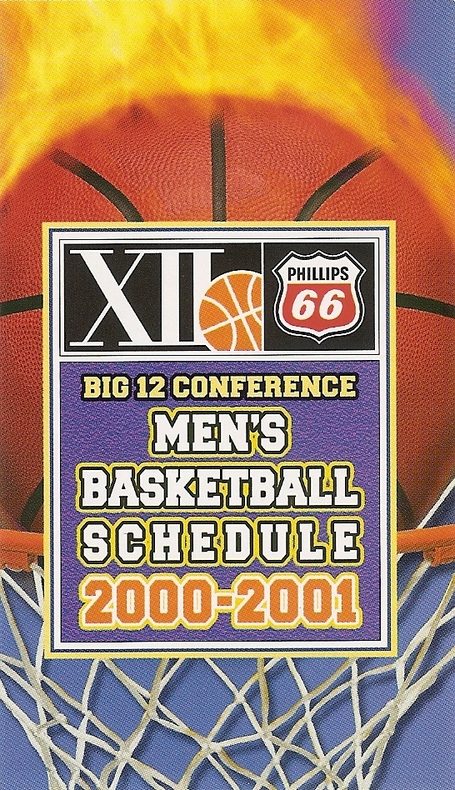 2000-2001: 15 wins, but 15 losses. After bowing out in the first round of the NIT, the season before, Colorado put together a lackluster campaign to start a new century of basketball in Boulder. Great performances from Junior transfer DJ Harrison (38 points vs Austin Peay), Junior Jose Winston (15 assists vs. Coppin State) and Senior Jamahl Mosley (over 1,000 career points) marked some highlights, but a 9th place finish in the Big XII meant reinforcement was needed, in this case, in the way of ..."the most ballyhooed recruit in school history." http://a.espncdn.com/ncb/colorado01.html 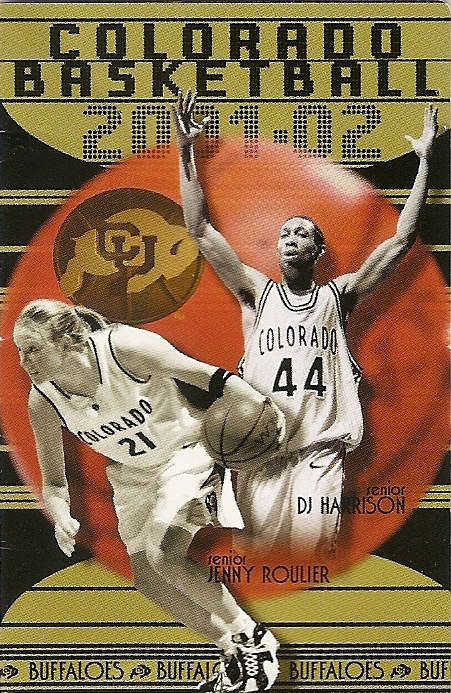 2001-2002: Big brother to star freshman David, DJ Harrison, joined by current Oakland Grizzlies assistant women's coach Jenny Rouiler, on the cover. The men's squad won another 15 games, putting Coach Patton over 100 for his Colorado career, and though 5 players scored in double digits, it still was not enough to move up the Big XII ladder. Another 9th place finish, though everyone but DJ would return the following season. Just to comment on Jenny for a second, she was a three-time All-Big 12 Conference selection, led the Buffaloes to the NCAA Tournament Elite Eight in her senior season and ranks eighth all-time at CU with 1,399 career points. 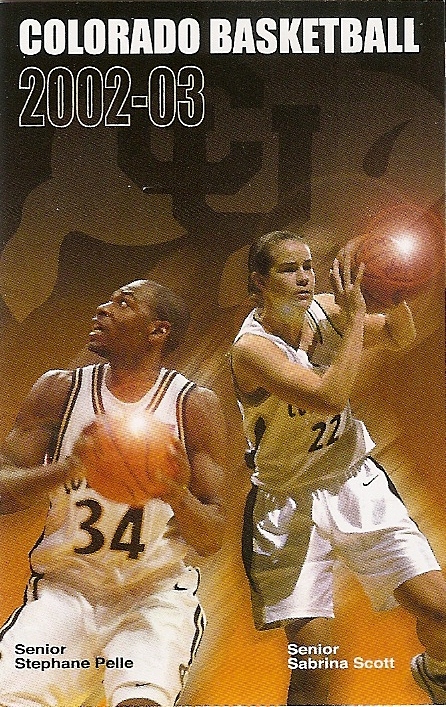 2002-2003: Stephan Pelle (who I once had a conversation with at The Players Club, since closed, but was on The Hill) and Sabrina Scott http://www.collegejersey.com/store/viewItem.asp?idProduct=15935 share the honors. This 20 win team (only the 3rd to accomplish that mark in school history, 2nd team under Patton) was undefeated at home in Big XII play (first and only time ever) and won 14 at home (the record before Boyle arrived). David Harrison (Sophmore) was a machine. He recorded the Buffs first ever triple double in Big XII play, set the team record for blocks in a game, then broke it 3 months later (11) and set the season block mark at 107, shattering the old record by 34. Home attendance was at a 20-year high and we made it to the NCAA Tournament for the 2nd time in 7 seasons. The last time we had been to the tournament 2 times in that short of span was 34 years before. 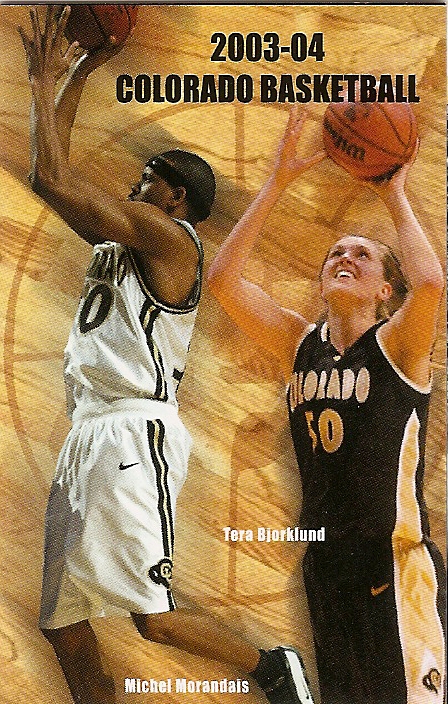 2003-2004: 3 players on the men's team eclipsed the 1,000 career point mark: Junior David Harrison, Senior Blair Wilson and our co-cover selection Senior Michel Morandais. And of course there was Tera Bjorkland, or should I say, "The Hall of Famer, #50..." http://www.cubuffs.com/ViewArticle.dbml?DB_OEM_ID=600&ATCLID=205025302 Another trip to postseason play (NIT), and a season mark of 18-11. Harrison, who departed before his senior season, left owning every block record for the Buffs, including an astonishing career number of 225, in only 3 seasons. Yes, Roby, Higgins, Burks and Roberson are the ones from the past 10+ seasons that most fans think about when stars of CU Hoops come to mind, but Harrison undoubtedly deserves to be in that Top 5. He never had a losing season in Boulder, made it to the NCAA Tournament and NIT in his 3 seasons and was a 1st round NBA draft pick. Last season he played in the NBA D-League http://www.nba.com/dleague/playerfile/david_harrison/index.html?nav=page Let's hope he makes it up to one of the big clubs again, sooner than later. 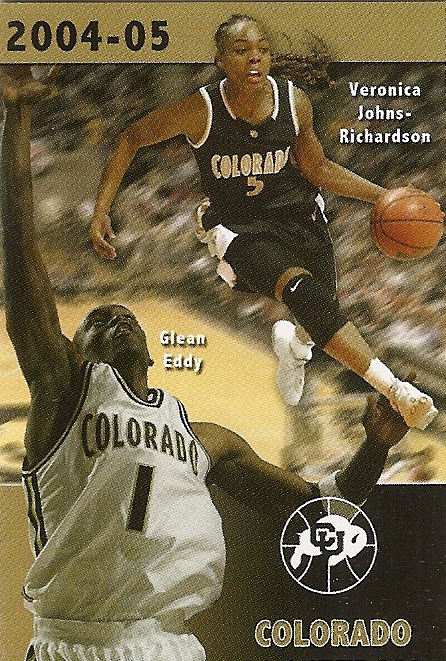 2004-2005: Junior bench sparkplug Glenn Eddy and Veronica Johns-Richardson http://bouldercountryday.org/ABOUT_MEET_FACULTY_STAFF_MIDDLE.php are our cover Buffs. Eddy, a fun choice on a Junior laden team, lead CU with 17 points in 21 minutes early in the season against non-conference foe Coppin State. CU was off to a 10-1 start, but only finished with 4 more wins in a 14-16 year. Richard Roby arrived and did not disappoint. All he did was lead us in scoring (first freshman since Chauncey Billups to lead the team) and ended up joining Donnie Boyce as the only Buffs to lead the team in scoring all four years on campus. The team also loved shooting the 3, more than any other in school history. 223 were made, besting the 98-99 squad by 5. Patton, notched career win 150, and another postseason berth looked to be in the cards the following season.

2005-2006: Another terrific season with 20 wins and 10 losses, another season record for 3 pointers made, wins at Oklahoma State and Missouri for the first times since 1980 and 1997, the 8th NIT appearance in school history and we were ranked in the USA Today/Coaches Poll (25th) for 2 straight weeks. Richard Roby, now a sophomore, became the 4th ever Buff to be named All-Big XII, but with 10 seniors leaving, any dreams of back to back 20 win seasons were just fantasies. A nightmare year was to follow with Ricardo Patton resigning before the year even started in a bizarre myriad of circumstances involving a contract extension dispute, a lack of respect, feeling no support from the athletic department for basketball, poor practice and playing facilities, a tough recruiting ground and on and on. A bunch of mumbo jumbo. http://www.orangepower.com/threads/colorados-patton-says-he-will-resign-at-end-of-season.27867/page-2 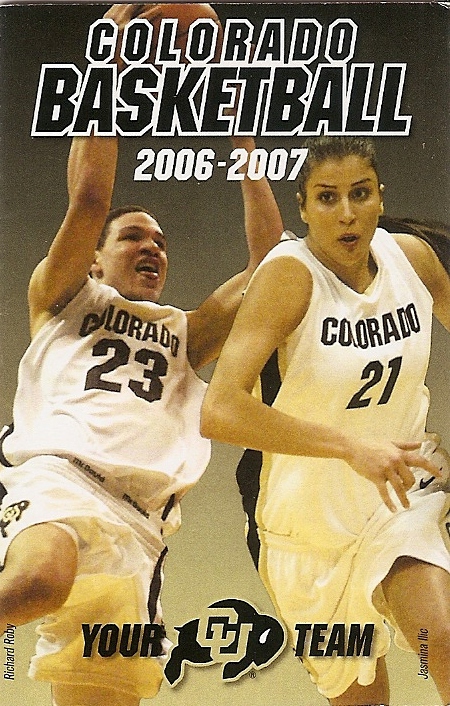 2006-2007: Senior Jasmina Ilic and Junior Richard Roby in their home whites are part of "Your Team"! I really like this cover, compared to others from the decade. I really did not like the season the men's team had. 7-20, including a losing record at home, do not even begin to tell the story. I'm sure someone much smarter and connected to the situation can shed a bit more light, but apparently this team was too young, quit on Patton, was pissed at his resignation, pissed at the AD for not keeping him on...any suggestions/ideas? I just do not know. This was the youngest team in the history of Colorado Basketball, but we still had Richard Roby who would go on to become one of the best all-time Buffs. So it was god speed to Ricardo and a big (?) welcome to (at the time) current Air Force and former Denver Nuggets head coach, Jeff Bzdelik, with an emphasis on the #zzzzzzzzzzz. 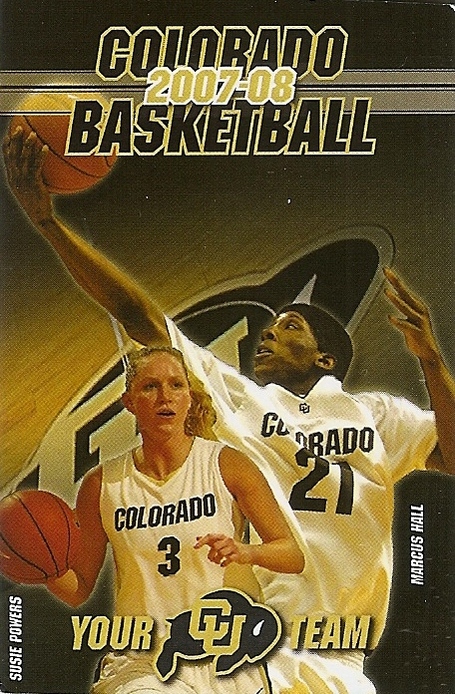 2007-2008: Susie Powers the senior in Gold (we should always have a gold alternate jersey for big home games for both teams) and fellow letterman Marcus Hall. Defense was the name of the game for these Buffs, holding their opponents to the lowest points per game total in 46 seasons. Turnovers were also at a 28 year low and free throw shooting was on the up. Like I said, #zzzzzzzzzzz. Final record in Roby's senior season? 12-20. He did leave as CU's all-time scoring leader with 2,001 points. A very consistent college career http://espn.go.com/mens-college-basketball/player/_/id/22187/richard-roby and he is currently still playing professional ball overseas. 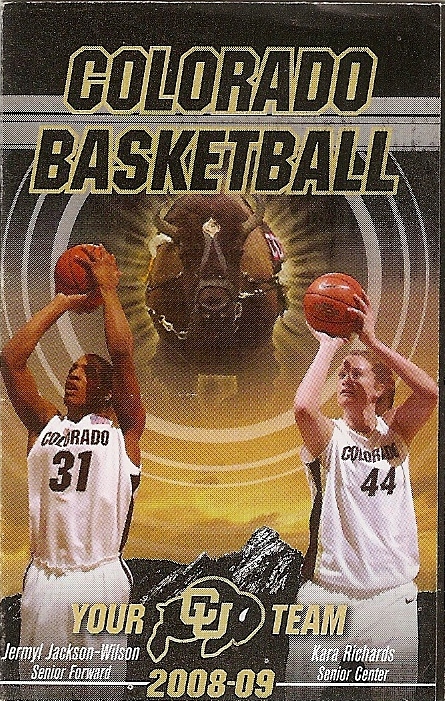 2008-2009: Jemyl Jackson-Wilson and Kara Richards, both seniors, and Ralphie IV! I mean, do I have to? We endured a 9-22 record, a 12 game losing streak to end the pain and no wins on the road. #zzzzzzzzzzz A couple of sophomores named Cory Higgins and Levi Knutson, along with a couple of freshman that go by Nate Tomlinson and Austin Default were part of Bzedelik's famed recruiting classes and all 4 made an impact, but it was an awful year and though next year we won 15, our coaching carousel continued to spin, but thankfully it stopped on who we now refer today as the leader of the Golden Age of Colorado Buffaloes Basketball. And by we, I of course mean me. 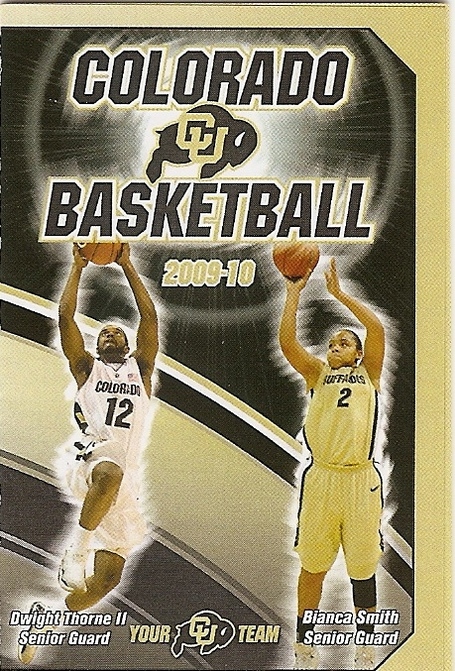 2009-2010: Thanks for the memories, Coach #zzzzzzzzzzz ! Dwight Thorne II and Bianca Smith are the seniors receiving the love from the marketing department to round out the decade. Alec Burks arrived on the scene and became the first Buff to ever be named Big-XII Freshman of the year. Chicagoan Marcus Renphroe joined the party as a Junior transfer, we set an all-time home attendance mark in the Big XII and Higgins blazed past the 1,000 point part while leading the conference in steals per game. I guess none of it was good enough, or the potential for the following season with all key components returning, as one again, our head coach left Boulder under strange circumstances. Maybe fans want to give him credit for trying to create a new culture in Boulder, getting practice facilities built and recruiting some legendary names, but he never had a winning season, left for what he assumes are greener pastures in an extremely tough conference to win consistently and I'd bet 90% of current student on campus wouldn't be able to name him if asked who our head coach was before Tad Boyle came to town.

It's funny how we can't wait to fire our last and current football head coach, fired the one before that, too, and with basketball, we can't hold on to them. And people like to tell me that we are not a basketball school. Hogwash. But, Boyle did come to town, with little pomp and circumstance, and in the two seasons since, well it's been quite a sight to this alum, other proud grads and a current fan base that is selling out home games on a consistent basis, traveling with the team to road contests and making the Coors Events Center the home court advantage that it always should be. Please, don't leave, Coach Boyle!

Coming up in our final installment, we will check out the most recent couple of seasons, look at this year's team and add in a few other images to get you prepared for Friday night's season opener and banner raising ceremony. I'm excited and I know you are too!