What To Expect In The Charleston Classic For The Colorado Buffaloes

The Colorado Buffaloes play in the Charleston Classic this week and are ready to make an impact in the non-conference season.

Share All sharing options for: What To Expect In The Charleston Classic For The Colorado Buffaloes

The Charleston Classic starts tomorrow and Colorado will be the first team to hit the court at TD Arena in Charleston. The Buffs take on the Dayton Flyers and will have their hands full with the A-10 opponent. If Colorado gets by the Dayton, they'll take on the winner of Baylor and Boston College. On the other side of the bracket is St. Johns, College of Charleston, Murray State and Auburn. Games will be played Thursday, Friday, and Sunday, and will air on the ESPN family of networks.

Third Game: The tournament takes Saturday off and resumes on Sunday. As the tournament goes on, we'll get a better sense of who the Buffs will play. As of now, Colorado will play either St.Johns, Murray State, Auburn, or College of Charleston in their final game.

Dayton Flyers: After losing in the NIT to end last year, and losing three starters, the Flyers have some question marks.They are inexperienced with one freshman starting and three coming off the bench and they lack depth at the guard position. However, Kevin Dillard, the team's best player, is a talented quick guard who can hurt defenses in multiple ways. He's small at 6'0", but Dillard averaged 13.3 PPG and 6 assists per game last year and was reportedly improving all summer. In Dayton's first game against Arkansas State, Dillard put up 12 points, 10 assists, and 6 rebounds. Dillard is the face of the Dayton program and the key to Dayton's offense. The Flyers also have Georgetown transfer Vee Sanford. Sanford didn't do much when he was at Georgetown, but he's a good scorer evident by his 18 points in their season opener against Arkansas State. Although it's one game, Sanford can score and helps Dayton's offense out immensely allowing Kevin Dillard the ability to facilitate with ease with Sanford being his backcourt partner. Up front, the Flyers return Josh Benson, who provides low post scoring and can rebound averaging 10.2 PPG and 5.4 RPG last year. He went down with an ACL tear before conference play, but seems fine as he played 27 minutes in their opener. Alongside him is Devin Oliver, who helped Dayton up front last year when Benson went down.

Ultimately, the strength of this Dayton team is the guards and Askia Booker and Spencer Dinwiddie will match up with Sanford and Dillard. The Buffs should be able to handle Dayton's backcourt, but if the Flyers go with their starting lineup from their home opener, it could cause matchup problems for the Buffaloes. Devin Oliver is 6'7"; Josh Benson is 6'9"; and freshman Jalen Robinson is 6'9". Josh Scott and Andre Roberson should be fine size wise and although Sabatino Chen is a good defender, with him being 6'4", it'll be interesting to see who he defends at the start of the game. It shouldn't be too much of an issue for Boyle as he always does a good job of mixing and matching his defense with the right players.

The keys for Colorado to win this game starts with the guard play. Askia Booker needs to shoot more efficiently than he did against Wofford and Spencer Dinwiddie just needs to play his usual game. The Buffs will also need to feed Josh Scott more. Against Wofford, Scott never forced it. If it's not there in the post, Scott will kick it out; there's no point to not give Scott as many looks as possible in the post. Andre Roberson needs to have a better game than he did against Wofford, but he just seemed disinterested at times against Wofford due to the inferiority of the players he was going up against. This shouldn't be an issue against Dayton. Lastly, the bench is going to have to contribute. I don't see much coming from Eli Stalzer and Xavier Talton in this game, but Shane Harris-Tunks and Xavier Johnson need to bring energy and scoring off the bench. If the Buffs can contain Dillard and not let Sanford get the shots he wants, they should be fine and come out with a victory.

Baylor Bears: Despite losing Quincy Acy, Perry Jones III, and Quincy Miller to the draft the Baylor Bears still remain a very good team. They bring back their leading scorer and senior leader Pierre Jackson. The Bears also return a player all Colorado fans are familiar with, Brady Heslip. Up front, the Bears have overall top five recruit and 7'0" center Isaiah Austin as well as the 6'8" 260 pound freshman and physical specimen Ricardo Gathers. Similar to Dayton, the strength of this Baylor team is their backcourt, but the bigs on Baylor are a lot more athletic and the Bears also have a great amount of depth on their roster. 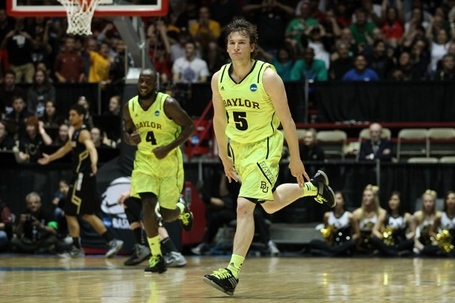 Remember this guy? The Buffs might see him again if they win against Dayton.

Boston College Eagles: Boston College started four freshman last year and they all return. The Eagles are young, but with a year of maturity and experience under their belts, they are poised to have a better year. They're led by 6'8" Ryan Anderson, an effective scorer and rebounder who put up 29 points and 17 rebounds in their season opener and averaged 11.2 points per game and 7.4 rebounds per game last year. Also, coach Steve Donahue has Dennis Clifford, a threat at 7'0", and Patrick Heckmann, who impacted Boston College's first game as a sixth man with 12 points in 20 minutes on four shots. To round out the squad, the Eagles have a freshmen backcourt in Olivier Hanlan and Joe Rahon. Ultimately, Boston College isn't ready to be a dominant team in the ACC yet, but they have an extensive amount of young talent and could surprise this year if Ryan Anderson makes a leap in his sophomore campaign.

It all depends on the first game. The Buffaloes should beat Dayton, but if they don't it will hurt their chances greatly come Selection Sunday when the committee is evaluating RPI and non-conference schedule. There's the chance for failure as the Buffs are still young and are playing at a neutral site at an untraditional time. The arena will not be packed and the environment will be much different than the Coors Event Center. However, I think all Buff fans can agree that Tad Boyle is an outstanding coach. The Buffs haven't played since last Friday, and Boyle and his coaching staff have had almost a week to prepare for this tournament. With a staff and squad like the Buffs have, that layoff can be very beneficial. They're not going to come out unprepared or be outmatched by another team and remember, this isn't like the Puerto Rico Tip-Off last year. Spencer Dinwiddie and Askia Booker aren't freshman and Andre Roberson has another year of experience. That being said, the Buffs are not the most talented team in the tournament. If they get to Baylor, they are going to have to play a complete game and win the guard and rebounding battles to come out with a victory. A win over Dayton, a loss to Baylor, and a win in their final game is my prediction for the tournament. The key thing for the Buffaloes is that they need to go 2-1 and pick up a victory against Dayton so they play better opponents in their next games. If they do that, the tournament should be considered a success.