Front-paged because I have now realized that we need an Animal-Style t-shirt. Help me with some designs ladies and gents - JW

I coined this nickname for Andre Roberson because he is a double double machine. Double doubles are a popular hamburger option for popular left coast hamburger chain In-N-Out. It means double meat and double cheese. Animal style is the most famous of the secret menu items for In-N-Out. An animal style burger is the "burger of your choice with hand-leafed lettuce, tomato, a mustard cooked beef patty; add pickle, extra spread, with grilled onions." But really, it's all about the animal fries, which add melted cheese, spread, and grilled onions to their admittedly mediocre regular fries. They are fantastic. 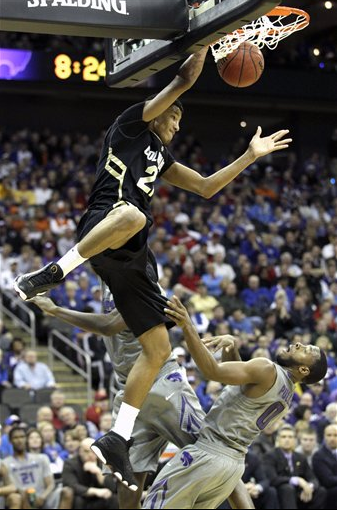 Andre Roberson is also fantastic. An added bonus is that "Animal Style" perfectly describes his dirty, gritty, high energy game. I have gotten Andre to claim #TEAMANIMALSTYLE on the twitter machine, where I chronicle his double doubles on a game by game basis (now at 10 this season! which is a double in and of itself!). And now Buff Em Up has seconded. Based on the laws of the internet, this is now an official INTERNET THING.

But I offer that it can be an IRL thing as well. I used to frequent a blog that coined the nickname "Bison" for Los Angeles Dodgers outfielder Matt Kemp. Rick Monday said it on air. It is now, fully, a Thing. So let's make Animal Style a thing for Andre Roberson. Hell, Mark Johnson quotes Trey Eckloff's twitter all the time. When Animal Style is fully a Thing, TRR can claim it and live in infamy until the end of days, like when Bilbo Baggins sailed off with the elves, or possibly something less nerdy. Do it for the children.