One of posts we are going to do on a weekly basis is an amalgamation of all the content we produce, some of the great stuff we receive from the Colorado Sports Information Department and other references to get you prepared for the Buffs' next game. It's a place you can go during the game if you need to look at a depth chart or want to look at a player's stats from a year ago. If you have other things you have read that you want others to see, post it in the comments section so the rest of us can view.

If you live in the area and aren't yet planning on going to the game get your act together and get tickets. We will have both football and basketball (great ones too) recruits there and we need to show them how CU does things. Not to mention that whole game on the field... The weather forecast is calling for a clear day with highs in the mid-70's and as you see in the graphic provided to us by our ticket partners, TiqIQ, there a tons of cheap tickets left. Get it together. 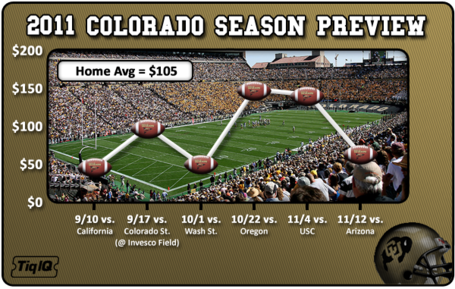