Film Study: California Vs Colorado - Perfection At The Point Of Contact Blocking

Share All sharing options for: Film Study: California Vs Colorado - Perfection At The Point Of Contact Blocking

Last week, the Buffs faced a team in Hawaii that wanted to create mismatches through spread formations with four or five receiver sets. Hawaii succeeded. They spread the Buffs out allowing for running lanes which QB Bryant Moniz capitalized on. This week, CU will face a team in California known for a sophisticated west coast style of offense where it comes down to spacing, attacking weaknesses of a defense and assignment football. Attention to detail is a big part of the California offense and when executed correctly, it is one of the best offenses to watch in the country. As we saw last week, the Buffs either weren't prepared for the quarterback run or assignments were missed. This week for Colorado to win, they can't miss assignments and they have to beat California up front at the point of attack.

Below is a perfect example of an extremely well executed play California had against Fresno State for their second touchdown. Personally, this is what the Colorado offense must strive to look like. This play requires six players including wide receivers and tight ends to hit their blocks. You will see, each player hits their block and due to a delayed reaction by the Fresno cornerback, California RB Isi Sofele goes untouched for a 39 yard touchdown run.

Cal comes out in a three receiver bunch set left (labeled one, two, three in yellow) and a lone receiver on top of the screen. Fresno St. shifts their three linebackers over towards the trips formation (labeled one, two, three in orange), an appropriate response to a strong side formation. California RB Isi Sofele will get the ball and run towards the trip receiver side as shown by the blue arrow. 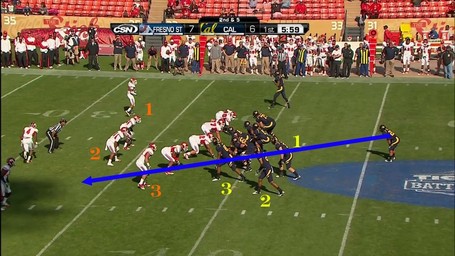 First we will look at the players on the left side of the line and who they are responsible to block. The next two pictures below will help you see this from the side and from behind. The center (yellow arrow) probably has the toughest block of the bunch. He has to get out on the middle linebacker. If the middle linebacker reacts quickly towards the play side, it is going to be a very tough block. But look at how the running back helps the center with his block. You will notice on the second picture from behind, Sofele does a jab step to the right, away from the hole. Look at both linebackers looking into the backfield, not reading their keys and running away from the hole to the right side. This move by the running back gets the linebackers running away from the hole and allows the lineman to get into position to make the correct block. Perfect execution so far.

The left tackle (orange arrow) has the kick out block on the end. He probably has the easiest block since the defensive end is lined up outside of him. All he needs to do is push him towards the sideline not allowing him to crash down into the hole.

The receiver labeled #3 (green arrow) has a similar kick out block on the outside linebacker. He needs to push him to the sideline so the running back can run inside of him. 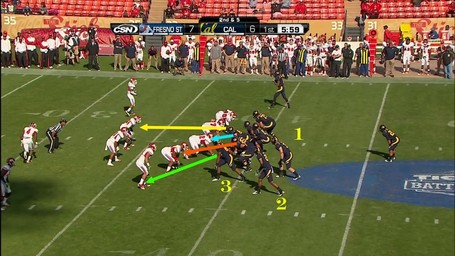 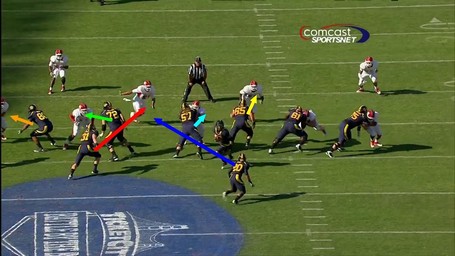 The next set of blocks are from the other two receivers in the trips formation. They have the touchdown blocks, the assignments that turn a five yard gain into a score. The fullback #31 John Tyndall in the back of the formation (red arrow) has another difficult block. He has to attack the linebacker directly in front of him but five yards off the line of scrimmage. Tyndall is dependent on the offensive linemen engaging their blocks and clearing a path so he can take a proper angle to the linebacker. If he is interfered with at all this is a 3-5 yard run because that linebacker makes the play. The final block is #21 WR Keenan Allen (purple arrow). It's huge when a wide receiver does what Allen does on this play. His job is to block the safety not on the screen. This is the last layer of defense between RB Sofele and the end zone. As you will see, the cornerback to the trips side of the formation is late getting to the ball and the opposite safety takes a bad angle. 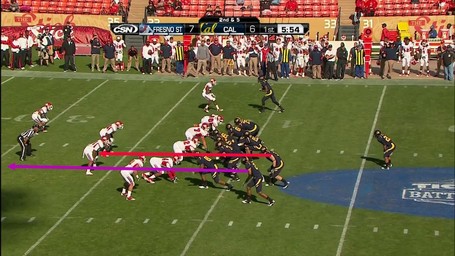 The picture below is a thing of beauty. Look at every player hitting their assignment. All five of the blocks on the defensive linemen and linebackers are perfectly executed. RB Sofele is running right behind Tyndall (red arrow), who is clearing the path. You can see Keenan Allen (purple arrow) close to engaging the Fresno safety. The Fresno defensive players were just dominated on this play. Colorado will have to be better one on one players than what Fresno showed here. Conrad Obi, Will Pericak have to get penetration. Jon Major and Doug Rippy have to be able to shed blockers and make plays from the linebacker spot. Guarantee, we will see this play Saturday. 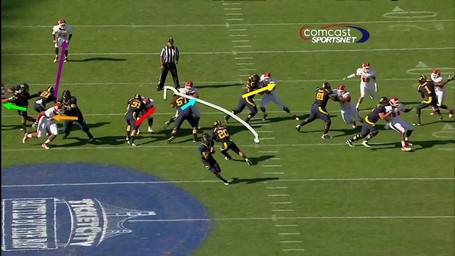 Tyndall (red arrow) has cleared the linebacker and now Sofele is through the hole. Allen (purple arrow) has the safety in his sights. 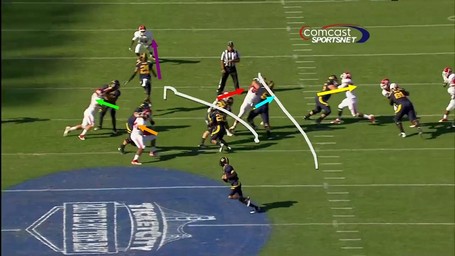 Look at the block Allen lays on the safety. For a wide receiver, that is superb.

Another look at the block from the side by Allen. You will also notice the cornerback originally lined up on the bottom part of the screen (yellow circle) took a bad angle and whiffed on Sofele. The opposite safety, the one not getting destroyed by Keenan Allen (green arrow) also takes a bad angle and Sofele out runs him. We saw similar issues last week against Hawaii where safeties and cornerbacks missed opportunities to make plays on Moniz. Cal will try to put the Buffs in similar situations.