So I couldn't re-watch the Ohio State game, just couldn't do it. It was too painful the first time so why do it again? Therefore, the film study this week will focus on the next Colorado Buffaloes' opponent, the Washington St. Cougars. Wazzu was off last week but before that, they played a tough San Diego State team on the road. Washington State jumped out to a 24-14 lead behind a strong passing attack from QB Marshall Lobbestael to WR Marquess Wilson and WR Isiah Barton. Similar to Hawaii, Washington State likes spread the defense out with multiple receiver sets to create mismatches. With the Buffs being severely undermanned due to injuries at the cornerback position (Sherrard Harrington, Parker Orms and Travis Sandersfeld all out), Colorado's ability to cover multiple receiver sets is certainly a concern.

Below is Washington State's second touchdown of the game against SDSU to give them a 17 - 14 lead. Wazzu comes out in a shotgun single back formation with three receivers to the top, one receiver to the bottom. Only five offensive linemen.

San Diego State comes out in a 3-3-5 defensive set with four cornerbacks matched up man to man on the four receivers and a safety rotated (yellow circle) towards the single receiver side. Personally, I believe that safety should be lined up shaded toward the middle/top of the formation to help on the three receiver set as well. You can see by the red circle, there is no one to the top of the screen as a backup to the three corners in coverage. Senior QB Marshall Lobbestael sees this defensive set up and knows he has three options up top and if one of his receivers beats their man, it will be a big play. San Diego State is also going to blitz their two outside linebackers as noted by the green arrows below. Typically, San Diego State may drop that linebacker on the top of the screen into coverage to act like a safety but in this scenario, they don't and it burns them. Currently, the top linebacker is not showing blitz but Lobbestael does something at the line of scrimmage to make the linebacker give away is intentions to attack the line of scrimmage. 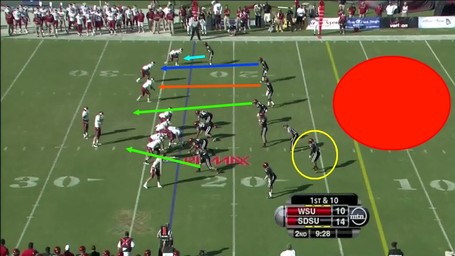 Usually to signal a snap to the center from the shotgun position, the quarterback will lift his leg. Lobbestael and his center have worked out on this particular play, at least, that the center will snap the ball on the second leg lift. On the first leg lift, he fakes the top linebacker out (circled in green) into thinking he was snapping the ball. Now the linebacker shows he is coming on the blitz. That gives Lobbestael a ton of information about this defense. As you can see, the safety (circled in yellow) is still in no mans land, not cheating over to the three receiver set up top. Lobbestael now knows the linebacker is blitzing so the top side of the field is wide open. If the linebacker dropped into coverage, his pass would probably go to the very top receiver or the second receiver (orange arrow). But now Lobbestael can pick and choose any of the three up top. 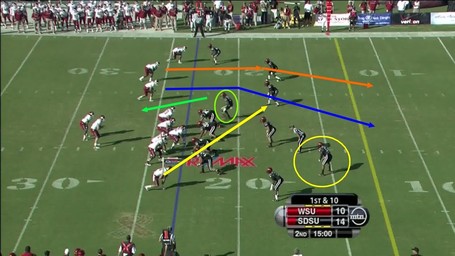 Again, look at the open field (red circle). With San Diego State bring two linebackers on a blitz, they better get to the quarterback or this will be a big play. Bad news for the Aztecs is they are still only rushing five defenders against five offensive linemen so not a huge advantage. It will come down to the receivers getting open versus single man on man coverage or if the San Diego State defense can get to the quarterback first. 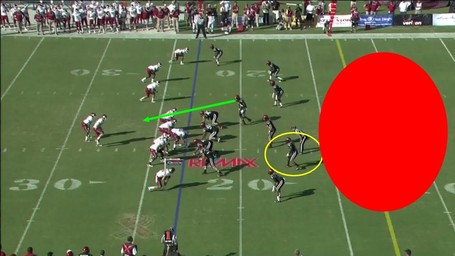 The two linebackers blitz off the edge (green arrows), the middle linebacker is in man to man with the running back (purple arrow). The safety (circled in yellow) is flat footed and still shaded towards to lower side of the formation. Lobbestael looks immediately towards the top of the formation where he wants to throw the ball to his three receivers running seem/post routes. Lobbestael will hit the middle receiver, Isiah Barton for a touchdown. 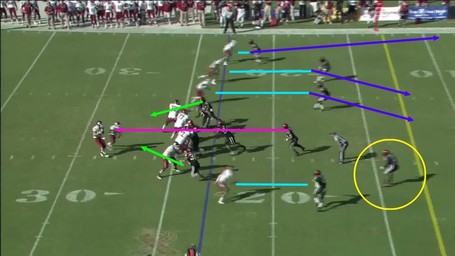 Here is a better picture from behind showing the safety not in the middle of the field and shaded towards the bottom  receiver. 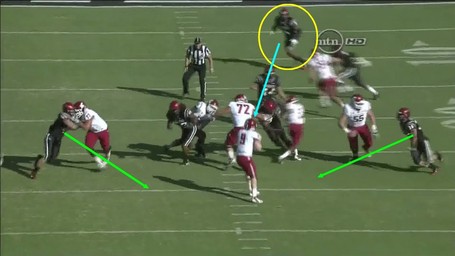 Sorry for the bad picture, it wasn't the best feed this week. As you can see below, still man on man coverage and the middle receiver (blue arrow) has his man beat to the inside. 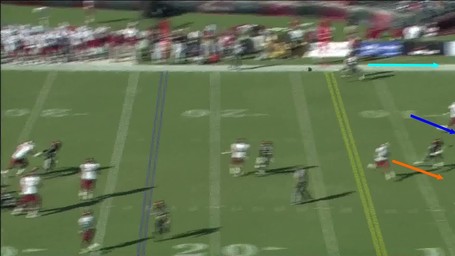 Perfect throw from Lobbestael to Barton for the score. There is the safety (circled in yellow) late to the middle of the field and not able to make a play on the ball 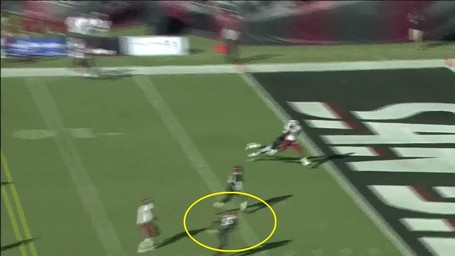 Safety play will be crucial this week for the Buffs to avoid these sorts of things happening and to provide plenty of backup help to the inexperienced secondary.