Against Colorado State, the Buffs finally showed signs of a run game developing in Boulder. In the second half, Colorado ran the ball 21 times for 92 yards and wore down the Rams in the fourth quarter with a ten minute drive that included 55 yards rushing. If the Buffs are going to pull the upset against Ohio State this weekend in Columbus, they need to be able to both pass and run with success. This is a relatively strong OSU defensive squad so attacking them in multiple ways is a must.

Below is a 12 yard run from Rodney Stewart in the middle of the second quarter. Eric Bieniemy and the Colorado Buffaloes get creative on this, moving right guard Ryan Miller (circled in red) to right tackle and right tackle Sione Tau (yellow circle) to right guard. This play calls for the right tackle to be quick enough and hit the first man outside the tight end. Ryan Miller gives the Buffs a much better chance to get down field and block then Tau does. You will also notice a two tight end set with WR Paul Richardson and WR Toney Clemons split out off the screen the right side. Stewart is set to run just outside the tight end. This sort of run requires the receivers on the strong side to make a block, if not, the play goes for no more than three yards. 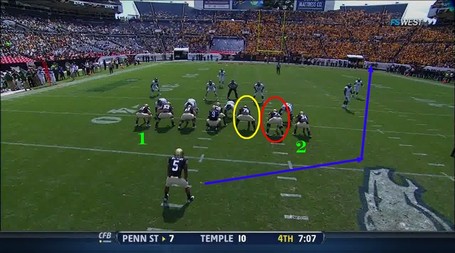 TE Ryan Deehan (green arrow) has a very easy block on the defensive end. It's easy because the defensive end is lined up to his inside. Since the play is going to his outside, all Deehan has to do is drive down hard on the end. If the end was lined up on Deehan's outside shoulder, he would have do a difficult hook block that if the end got field enough, he could destroy the play in the backfield. C Daniel Munyer has the nose guard lined up directly in front of him. Tau (yellow arrow) and Miller (red arrow) are both pulling. Miller's job is to hit the first defender that presents himself in the hole, Tau is responsible for the next player to present himself in the hole, usually a safety. As you will see, Tau isn't the quickest lineman. He doesn't get down field quick enough and doesn't pick up the touchdown block. 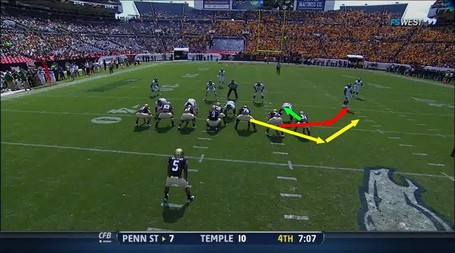 Below you can see how the play should develop. First block is Ryan Deehan (green arrow) who is locked up on the defensive end, no problem. Like we said, easy block. Ryan Miller (red arrow) has gotten a great pull and is already outside Deehan before Stewart gets the ball. He is locked in on the outside linebacker, the first man to present himself in the hole. Sione Tau (yellow arrow) is slower out of the gates and is now trying to get the to next level and account for the safety way in the back of the screen. Tough block for any lineman, regardless of how fast or slow. If someone misses their block like Ryan Miller or one of the receivers, Tau would pick them up first. On the backside of the play, OG Ethan Adkins (purple arrow) has an important second level block on the inside linebacker. These backside blocks, if done right, allow the shifty Stewart to make cuts back against the grain if their isn't a hole where the play was originally designed to go.

Finally, we look at WR Paul Richardson (aqua arrow) and out of the screen WR Toney Clemons (orange arrow). They are responsible for the two cornerbacks. As you will see later, Richardson and Clemons both do a good job sealing their corners from the hole. Richardson has a very difficult block because they are running right behind where Ryan Miller is now. Paul has to hook to the inside of the cornerback and get his backside facing the hole to wall of the corner from the play. 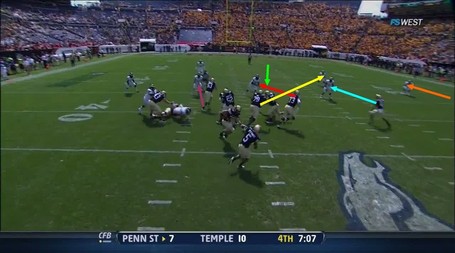 Big thing to note here and it is a little harder to see but WR Paul Richardson's backside (aqua arrow) is towards the hole. Great job by the sophomore wide receiver. Miller (red arrow) is about to blow up the outside linebacker while Tau (yellow arrow) is still trying to get around Deehan (green arrow). 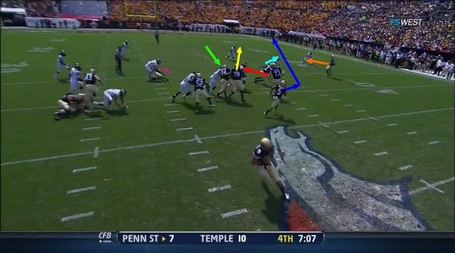 Below is a picture of beauty, for the most part. WR Paul Richardson (aqua arrow) has completely sealed off the cornerback. His backside is towards the hole. I can't stress enough how hard and important of a block this is especially for a wide receiver. On the other side of the hole is Ryan Miller (red arrow) who has sealed the inside linebacker from the hole. Stewart is going to run right between them. Up top, WR Toney Clemons (orange arrow) is also shielding his man from the hole. Tau (yellow arrow) is still trying to get outside Deehan. He is supposed to block the safety with two asterisks over his head. He doesn't get there but Rodney Stewart puts a great move on to make the safety miss...badly. 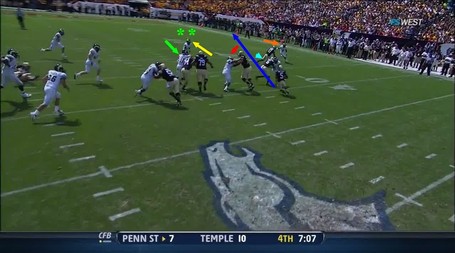 Again, great blocking by Miller and Richardson. Stewart has to make a move on the safety highlighted with the asterisks. 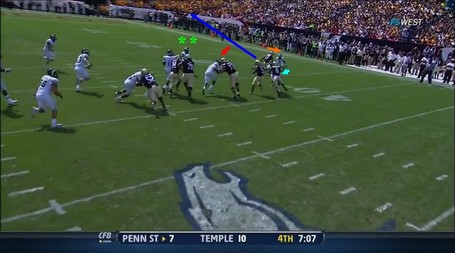 And finally, said safety on the ground (find the green asterisks) due to a shifty little move by Rodney Stewart. Stewart does a great job making the first man miss in the hole. 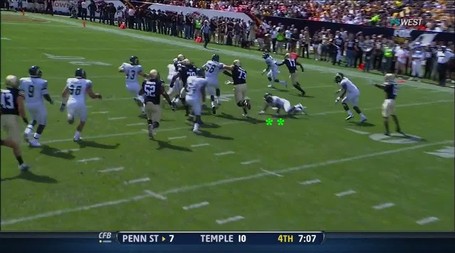