If you watched the Cal game, you know a big part of the offensive game plan was screen passes. Screen passes are a great way to slow down an over-aggressive defense. When a defense blitzes and screen is called, it is one of the best plays to watch form. On the surface, screens seem like a relatively simple play but it takes patience, downfield blocking and a good amount of acting. In the NFL game, you see a ton of screen passes being used and this is clearly something offensive coordinator Eric Bieniemy brought with him back to the college game. The Buffs ran this play at least five times. Rodney Stewart ended the day as the Buffs' second leading receiver, hauling in seven passes for 86 yards. Below shows his largest reception of the day, a 26 yard completion.

As we talked about above, the best defense to run a screen against is one that blitzes and is aggressive. Even better is when the defense blitzes to the side you are running the screen. As you can see, the linebacker circled in yellow is coming on a blitz. Rodney Stewart will run a screen pass to the bottom of our screen as shown by the blue arrows. Perfect scenario, the more the defense gets up field toward the quarterback especially towards the screen side, the better.

For a screen to be legal, Stewart must remain behind the line of scrimmage to avoid offensive lineman blocking downfield to be deemed "illegally downfield." WR Tyler McCulloch's (green arrow) main job is to run a deep fly route to clear the cornerback from the area where Stewart will catch the ball. If the defense is in a zone, that cornerback will be in the area so one of the lineman blocking downfield will have to block him. Good news, the Bears are in man to man defense so the cornerback will be forced to cover McCulloch all the way downfield and therefore, one of the lineman will not have to waste his block on him. 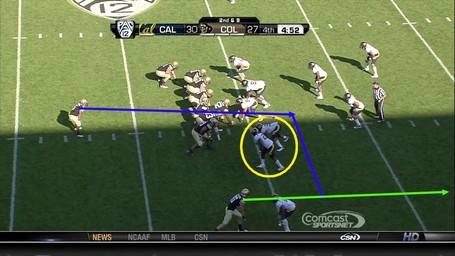 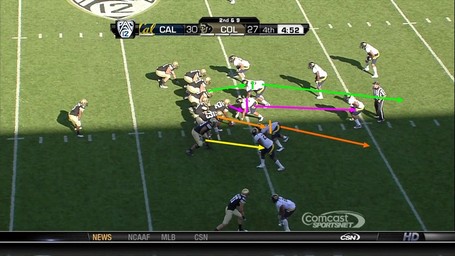 As you can see below, Ryan Miller circled in orange does a good job blocking his man and is now releasing his man to go upfield to the quarterback. Ethan Adkins, green arrow, is chip blocking the nose tackle originally lined up over Daniel Munyer. Munyer, in the pink arrow, is attacking the outside linebacker to get the first downfield block. As you can see, if Munyer connects on his block, their is nobody in the area, perfect for the speedy Stewart to make a play. 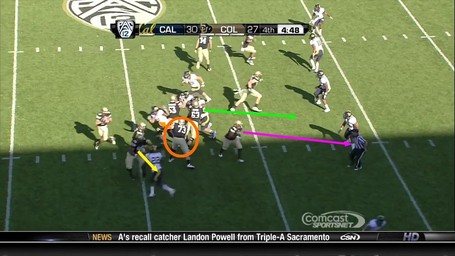 Stewart, blue arrow, has now caught the ball and will run towards the middle of the field. Daniel Munyer attempts to cut block the outside linebacker (pink arrow). He slows the linebacker down but Ryan Miller (orange arrow) must complete the block since the backer is still on his feet and Munyer is on the ground. 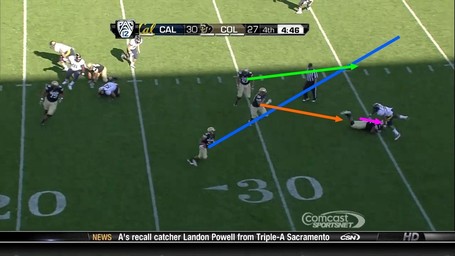 Miller completes the block (green arrow) and Stewart is free to the second level. 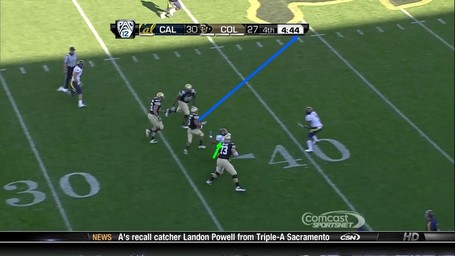 Important in a screen pass, especially those that score touchdowns depend on wide receivers blocking downfield. Kyle Cefalo, in red, blocks the Cal defensive back. Stewart is one block away from a touchdown. He needs WR Keenan Canty, circled in pink, to block the safety. Canty does not complete the block and Stewart is tackled after a 26 yard gain. I guarantee you, Jon Embree was not happy with Canty in film study after watching him not get this block. 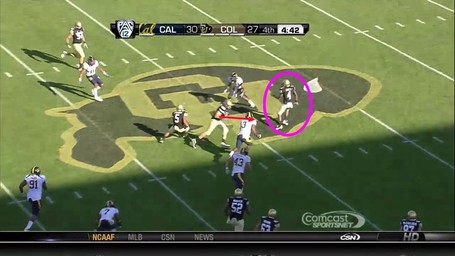