When you think of Hawaii, you immediately think about the high flying offensive scheme. Last year, the Warriors threw for 5,520 yards with QB Bryant Moniz leading the NCAA with 5,040 yards, 39 touchdowns and 15 interceptions. It also has a formidable running attack that catches defenses off guard trying to play the pass. What makes this offense difficult to defend is the mismatches it creates, putting pressure on every defender. Below is a breakdown of what Hawaii tries to do on offense which helps create an efficient running game.

Hawaii comes out in trips left (three wide receivers to the bottom of your screen) and one wide receiver up top. The running back is in the pistol formation directly behind the quarterback. USC comes out with three cornerbacks and two linebackers. The two linebackers are circled in yellow and red. You will notice that the linebacker circled in red has responsibilities for the running back, the linebacker circled in yellow is responsible for the first receiver on the trips side. Mismatches are what Hawaii is trying to create. First off, it is difficult for that linebacker in yellow to cover the wide receiver. He has help over the top with the safeties but the fact that the safety has to three receivers to his side adds pressure to maintain his depth, not letting anyone behind him.

USC, under this situation is only bringing pass rush of four meaning Hawaii has five offensive lineman to block four rushers. 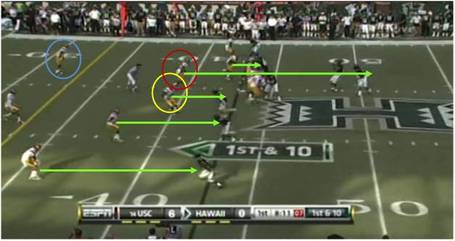 Hawaii has called a run play. Since Hawaii has five offensive linemen to four pass rushers, the offensive center (as shown by the orange arrow) is free to attack the linebacker circled in red, the only USC linebacker in the vicinity focusing on the running back. The safeties are in a back pedal to guard against the pass and the corners are man to man on the receiver. Essentially, Hawaii has USC focused on the pass and now has five on five for at least a 15 yard run. 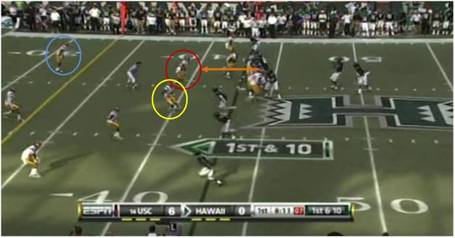 Also, since USC has come out and played man against this set, look at the middle of the field as the ball is snapped. Hawaii has done exactly what it wants the defense to do. They have five on five upfront, have a defense in a pass first mode and have created a void in the middle to run with. 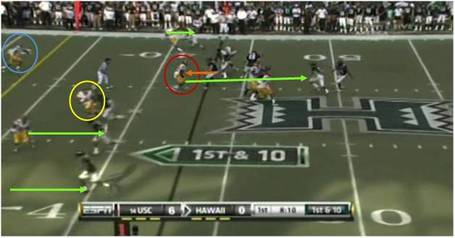 Great block by the center, he removes the middle linebacker. The rest of the defensive line has done nothing to help the inside linebacker now engaged by the center. It will be key for the Buffs front three/four to win the battle on the line of scrimmage, especially with an inexperienced offensive line for Hawaii. The USC defensive line was slow off the ball and did not gain penetration. The safety in blue has reacted well, still 7 yards from the line of scrimmage but he is closing. 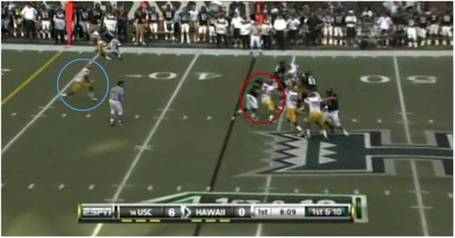 The safety is the last line of defense to stop the running back after some good blocking up front. But he misses the tackle. The Hawaii running back scampers for 30 yards before a corner that was dropping into coverage makes the tackle. Buff safeties Ray Polk and Anthony Perkins need to be sure handed tackles against Hawaii this weekend or this is what can happen a lot. This is the situation Hawaii's offense puts you in. Last season, the Hawaii threw for over 5,000 yards but also had a running back in Alex Green run for just under 1,199 yards. Even more impressive is he carried the ball only 146 times but averaged a whopping 8.9 yards per carry and scored 18 touchdowns. The Buffs can't snooze on the running game, need its defensive line to control Hawaii up front and to eliminate the big plays, can't miss open field tackles like the USC safety did. 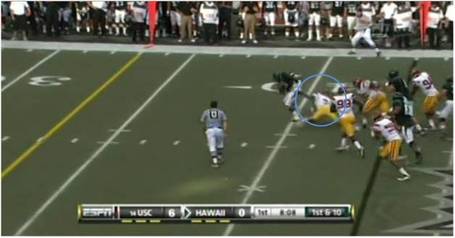