Share All sharing options for: The Hist-O-Graph Project - #1: Introduction

Succinctly, the hist-o-graph project is where I make one of these:

for CU (obviously), and the teams in the Big XII and the Pac-12.  Then I explain them and we discuss what they say about our old conference, our new conference, and the recent history of each of the football teams.

But first, I'd like you to think back to this time last year...

I'd like you to think back to this time last year; when we knew definitively we were going to be part of a Pac-12 Conference. Everyone was ecstatic, and you were too. You couldn't throw a newspaper without hitting retrospectives about CU, the Big 8, and the Big XII (and the 5th down).

I could have written this article then.

Then to May of this year, when news of the Pac-12 TV/Media deal broke. People were overcome with how awesome our new conference was going to be.  To many it was like we'd built a huge middle-finger out of $100 bills and directed it at our former conference mates. "So long, sucktown!" we'd say...

...in two months; when it became official in July of this year. The Governors of two States proclaimed July 1st 'Pac-12 Day'.  They rang church bells like it was World War II and the town had just been liberated. Only instead of GI's on Shermans, it was Larry Scott in a black Suburban.  It must've been awesome.

I should have written this article then, too.

I recall those memories in part because I conceived of this idea amidst all that flag-waving, and it fits best there in that time and thinking, 2, 4, or 12 months ago.  I should've written these articles then; but I didn't, and you'll just have to live with that on your shoulders.

I also mention it because the CU graph is pretty ugly, and I could use a few smiles.

I'm going to explain each component.  While it's obvious that the x-axis is years starting in '00 and going to oh-12, and the y-axis is percent from 0 to 100, here's a key to help with the rest. 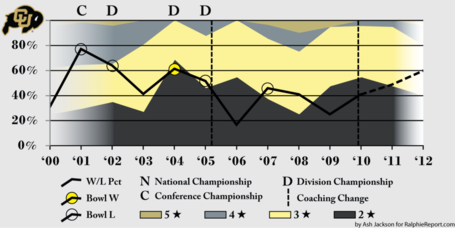 The heavy black line on the graph is the win/loss percentage, and the circle is a bowl game for that year: blank if we lost, colored in if we won. So in 2001 we won 76.9% of our games, but lost the Fiesta Bowl to Donald Duck. 2001 is also noted with a "C" for our conference championship that year, as '02, '04, and '05 are for us winning the Big Xii North.

The colored areas behind that line show our recruiting classes and what percent of the total class was made up of 2, 3, 4, and 5-Star recruits. For those, Scouts and Rivals only go back to 2002; which is why that left edge fades to gray. The 2012 fades to white only because 'commit' doesn't equal 'signee' (To me).  I don't think the star system is a panacea, or a surefire way to evaluate the team; some of our All-Americans were 3-star recruits. But it is one of the few ways to evaluate all these teams in the same way at a deeper level. (Without resorting to the statistical gymnastics of Rock M Nation).

Finally, the dashed vertical lines show a change in coaches, Barnett to Hawkins, Hawkins to Embree.

The Hist-O-Graph: Colorado - What does it say?

Firstly; Good god are we cyclical!  I mean, look at it... Up, up, down; up, up, down; ...less down, less down...  ...down. I was so astonished when I saw this, I had no idea our win/loss was so uneven, but cyclical and repeating on that triplet rhythm. Like it's a disease or something.

I've never seen so clearly that Hawkins recruited more 5-star players than Barnett (in the years examined) but did so little with it...ouch.  I also wasn't aware that recruiting had tapered off so severely 03-06.  It also paints in black and gold how far we fell in such a short time. A tenth of a point away from playing in the National Championship in '01 to losing to Montana, Baylor, and your Mom in '06.

But what do you see? What do y'all have to say?