Our favorite college football oracle has released his preseason all-Pac-12 teams and it's an interesting, yet somewhat sobering list. Phil Steele's 2011 college football preview will hit shelves on June 7 and the author is releasing bits and pieces of the issue as we get closer to that date. 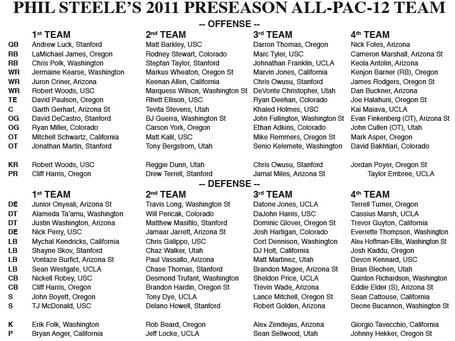 Take a look at the Buffs that made it and reactions after the jump...

First, let's take a look at the Buffs that did make the list.

Thoughts:
- Ryan Miller will most likely be first team on all of these lists. He's poised for a breakout year in a big way.
- Along those lines, it's nice to see three o-linemen make the teams. Talk about a key for our offense, if this line can open holes for Speedy and give Hansen time then that side of the ball could surprise.
- Speaking of Speedy, what an eye opener it is to see the lack of running back talent in this conference. Not a whole lot after Polk, James and Stewart. Quite the departure from the Big 12 isn't it?
- Good to see Deehan there, but where is Paul Richardson? He even has Kenjon Barner on the 4th team in a receiver spot. Richardson is going to surprise a lot of people in this league, especially if Toney Clemons can up his game enough to take some pressure off of Paul.
- Like Phil said in another post, interesting to see Pericak make it to the second team when there is a decent chance he won't start. I like that Hartigan is there and it wouldn't surprise me if Obi made it as well when the year is over.
- Ouch, no LB's, no CB's, no S's. That is downright scary. The linebackers don't worry me, but we still may want to prepare for some shootouts this year...

What do you guys think? Other misses?