Share All sharing options for: The 2011 Colorado Football Recruiting Class - In Map Form

Though I'm not really a stats guy, I am a maps guy; and while I was creating the grid for Monday, I had the idea to show on a map where each of this year's recruits came from relative to the regions each of our coaches have been assigned to recruit.

This kind of thing won't be nearly as fun to look at until next year when our coaches have had a chance to build relationships with the coaches, players, and parents in their assigned zones, but here it is anyways, The Colorado 2011 Football Recruiting Class, in map form... 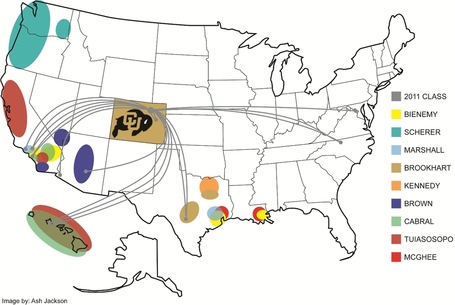 Note: Each coach's recruiting zones are based on this article from the Daily Camera, and my interpolation that the population centers of a state will be people's main focus.

Also Note: Yes, I know there are more than four different towns in Southern California.  I had to merge some to keep things legible.  If any SoCal types are horribly offended that I merged Van Nuys with North Hollywood, then deal with it.