Bridging the Conferences: Football Recruiting Retrospective Part I - A Chart for 2010

Share All sharing options for: Bridging the Conferences: Football Recruiting Retrospective Part I - A Chart for 2010

This is the first installment of an exciting two-part series!

It all started with the grid, which was really an attempt to look at recruiting classes more objectively.  With all of the recruiting coverage and discussion, the question was raised, "Does success beget success?"  Specifically, "does a successful Win/Loss record lead to more successful recruiting for the following year?"

To answer the question I basically made another grid, but instead of offense/defense breakdown, I added our 11 former Big-12 brethren.  Sadly, the numbers weren't very compelling in number-form, so I made them into a chart!

But I realized there was a problem: one year isn't good enough.  So then I made another chart...

And that 'other' chart is what you see now: 2010 Recruiting Classes compared to 2009 Win/Loss record.

As you can see, the 23 teams are ordered by their winning percentage from the prior year (the bottom row of numbers) regardless of conference affiliation.  Each team's record is shown as well, just below the team's name-label. 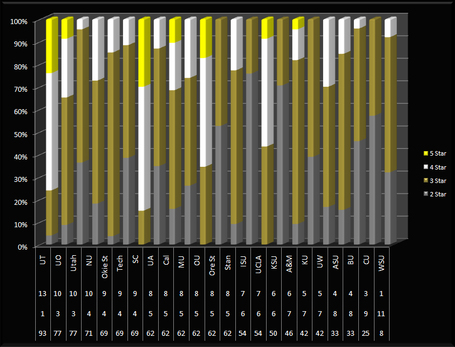 The colored bars show each team's recruiting class divided by percentages of star-ratings, relative to the whole, regardless of total size of the class.  The raw numbers aren't shown (mostly for legibility) but it's enough to see that SC's class was +30% 5-star recruits, despite going 9-4 the prior fall; while Utah had a single lonely 4-star guy despite having 10 wins.

In addition to the comparison I listed above, some other fun things jumped out at me for the 2010 recruiting comparison:

As always, there are plenty of factors that the chart doesn't address, i.e. Utah's 10 wins were against Most-Worst-Competition, Nebraska still has to live in Lincoln, etc.

What do y'all see in the chart that looks interesting, out of place, or fun?

Will Rocky be able to stop the hurtling aeroplane in time? Stay tuned for the exciting conclusion!