Share All sharing options for: College Football Hist-O-Graph Project - #15: End Of The Season

Don't know what the Hist-o-Graph project is? Lemme e'splain. No, there is too much. Lemme sum up: 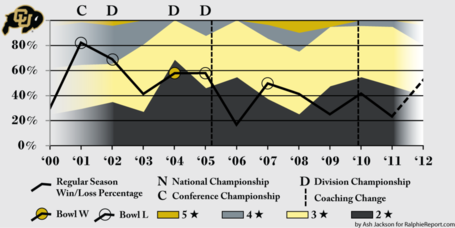 Pictures may be worth a thousand words, but they apparently don't satisfy the word-count requirement, so make the jump so I can stop eating pecan pie long enough to say some stuff...

You'll notice that everyone's record has been updated to reflect the 2011 regular season (blech) and also tweaked to only show the regular season from years past.

My rationale is that bowl games were essentially being counted twice. In some ways it's a philosophical question; do people (and recruits) remember that you won the Sun bowl, or merely that you went? Well, it only counts once now.

But now you can see the final Hist-O-Graph and see in a scroll where we've come from and where we've gone to...

The Pac-12 South: Call me Whack-tastic, but winning a real conference outright beats anything Utah or ASU did this whole past decade.)

State Mandated In-State Rivalry: At least we'll always have CSU to kick around.

Happy Holidays, Everyone. Thanks for reading the Hist-O-Graphs, and Go Buffs!

Miss one? Have a look at the back-articles...

#1: Introduction: Colorado and the Hist-O-Graph - It explains *mostly* everything

#3: California Bears Have A Deal With the Devil, and the Missouri Tigers

#5: Ohio State Buckeyes: OSU, the OSU, and the other OSU

#7: Stanford Cardinal and Texas A&M Aggies: Luck Has Everything to do With It

#9: Oregon Ducks and Texas Longhorns: Here there be Monsters