This week we look at the Stanford offense for our film study. The Cardinal played UCLA last week. Of course we are going to highlight a passing play with Andrew Luck. In the first half, Luck went 10-12 for 85 yards. The Cardinal scored on all three possessions but Luck hadn't attempted a big pass downfield, methodically picking apart the Bruins' defense. Coming out for the second half it was Stanford's ball, they got a good return and completed a nine yard pass on the first play. Below is the second play of the second half for Stanford where Andrew Luck punishes the UCLA defense for crowding the line of scrimmage.

Second and nine, Stanford comes out in a double tight end set with a flanker towards the top side of the formation. This would be Stanford's power set with no wide receivers. UCLA is thinking second and one, Stanford is lined up to run the ball with this power formation. UCLA's safeties are within seven yards of the line of scrimmage and the remaining nine players are within five yards. Luck will go back and give a play action fake, freezing the safeties and linebackers. 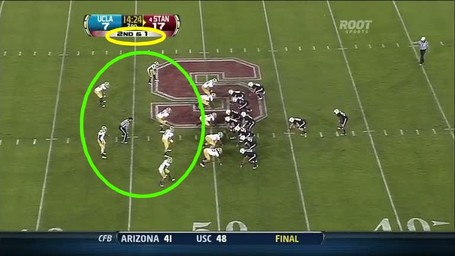 The right tight end and the right flanker are going to run crossing routes against the right cornerback and right safety (green circles). 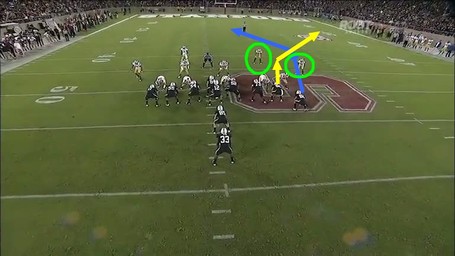 Below is a side view of the two receivers and the two defenders circled in yellow. 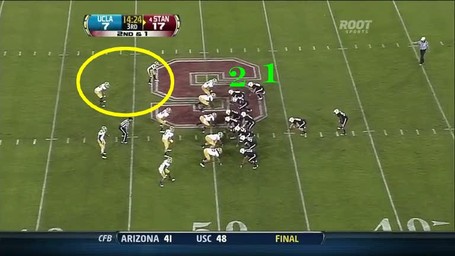 Luck gives the play action fake. The safety's eyes are in the backfield as are the linebackers' which makes them slow to react to the soon to be pass. 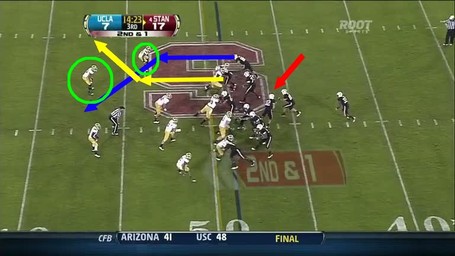 Circled in orange is the middle linebacker, late to react to the pass and get back in the passing lane. The safety (green arrow) is currently looking at the inside tight end (yellow arrow) while the cornerback (pink arrow) is looking at the flanker (blue arrow). 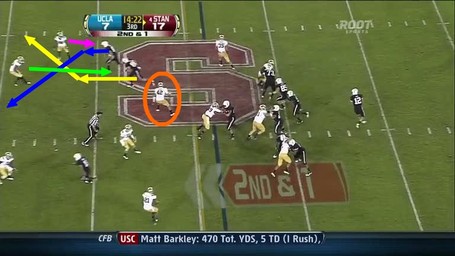 Again, below you can see that the Bruins are in a semi zone defense where the safety (green arrow) is currently looking at the inside tight end (yellow arrow) while the cornerback (pink arrow) is looking at the flanker (blue arrow). The receivers are about the cross and the safety/cornerback will switch who they are covering. 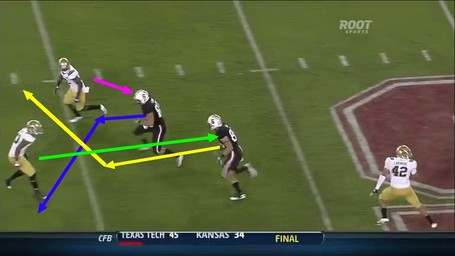 The safety and the corner switch but both switched late and while in a back peddle, allowing the flanker (blue arrow) to run past the safety. 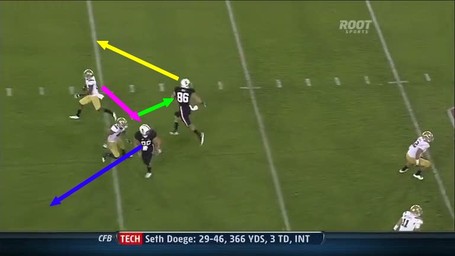 From Andrew Luck's view. See both the corner and the safety still in the back peddle not running with the receivers. Luck spots that and knows he will have open receivers. 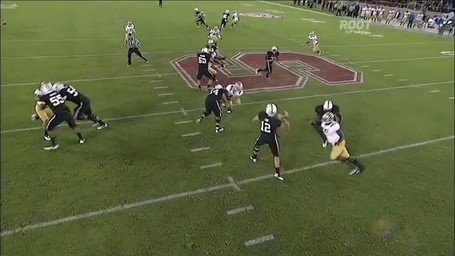 Touchdown. They always say second and short is a great deep passing down, a great chance to take a risk because the defense expects a short run or pass so they will crowd the line of scrimmage. If you complete it, you have a chance to score a touchdown. If you don't, you still have third and one. With a quarterback like Andrew Luck, teams must always be prepared for the deep pass on any down especially in situations where the defense crowds the line of scrimmage. 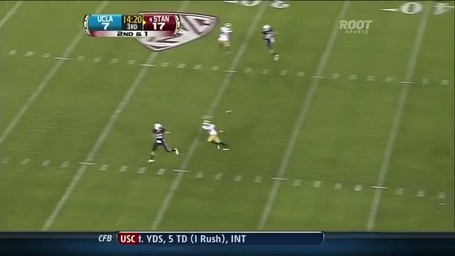