Last year, we broke down a few Colorado Buffalo plays with screen shots of the game and it seemed to be a fan favorite. So this year, hopefully we can bring it to you for all the televised games the Buffs play in. Today, we will look at the crucial play early in the game that helped the Buffs establish control of the game.

In the first quarter, Colorado State decided to take a chance going for it on 4th & 1 from their own 44 yard line with the game barely underway. A very questionable decision that in hindsight, head coach Steve Fairchild would probably love to have back. What made the call even more questionable was the pre-snap set up. CSU took out 6'5" 220 pound Pete Thomas and substituted in WR T.J. Borcky, placing him five yards behind the line of scrimmage in the shotgun. Immediately, Colorado State turns a 4th and 1 into a 4th and 6. If I was going to go for it and I need a half a yard, keep Pete Thomas under center and just let his 6'5" frame fall over for a first down. But what Fairchild also did is completely took the threat of the pass out when you remove Thomas for a wide receiver. The Colorado Buffaloes' defense recognized the CSU formation and took full advantage. 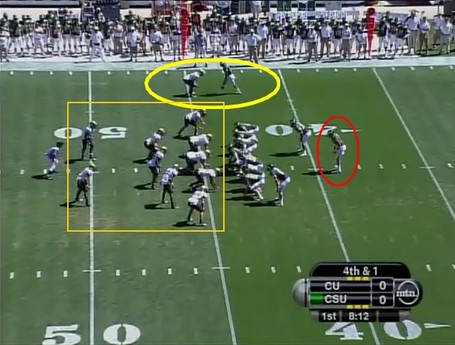 As you can see from the yellow circle, it is good to have very solid corners. Up top, Jalil Brown is playing the CSU receiver one-on-one, with no safety help. CU can afford to do that this year in these type of situations. Further, Colorado, without Pete Thomas in the game and therefore little threat to pass the ball, stacks the line (orange square) with all 10 remaining players within five yards of the line of scrimmage. CSU comes out in a double tight, double wing, shotgun formation. Colorado has CSU outnumbered with 10 tacklers and only nine green blockers. WR T.J. Borcky is circled in red, he will be our ball carrier.

So this play gets me very excited because #83 Will Pericak and #50 Curtis Cunningham single handily blew this play up. Jon Major and Anthony Perkins will get all the tackle credit on this play but it was the big guys up front taking care of business on this one.

see more after the jump... 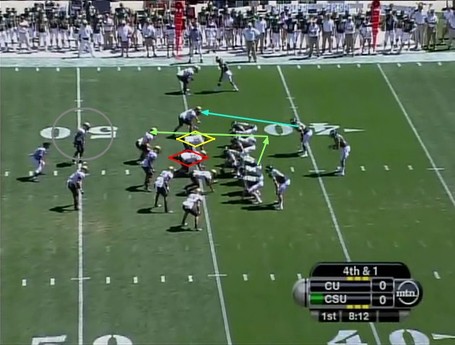 In the red diamond is Pericak, in the yellow diamond is Cunningham. The play call is a direct snap run to the top of the screen with a backside pulling guard to cleanup the middle linebacker, Jon Major (as shown by the green arrows from the pulling guard). The top wing back (aqua arrow) is supposed to take care of outside linebacker B.J. Beatty, which he does. Not having a throwing threat allows S Anthony Perkins (circled in gray) to sneak up by the line. He is unaccounted for unless a top side tight end or tackle can rub off their man and go to the next level. 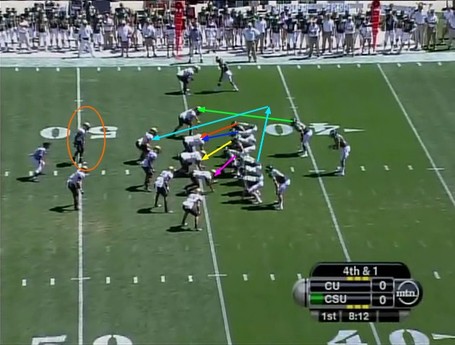 Above is the blocking scheme for the Rams. The top side tackle and tight end (red and blue arrow) are supposed to double team Curtis Cunningham. The top side guard (yellow) is supposed to make a tough block down on nose guard Will Pericak. The bottom side guard (aqua color) is pulling to block LB Jon Major. His goal is to come right down the line of scrimmage quickly and get to the next level. The pulling guard has an extremely important block on this play and absolutely needs to get to the linebacker for this play to succeed. But what you will see is that doesn't happen because of Will Pericak's penetration in the backfield, causing the bottom pulling guard to have to loop around Pericak (instead of getting from point A to point B the quickest by running right down the line of scrimmage), stumble and by that time, the ball carrier is already through the hole without a lead blocker. Now two Colorado Buffalo players are unaccounted for, Jon Major and Anthony Perkins. Curtis Cunningham successfully takes on the double team, not allowing the tight end to rub off and get to Perkins. 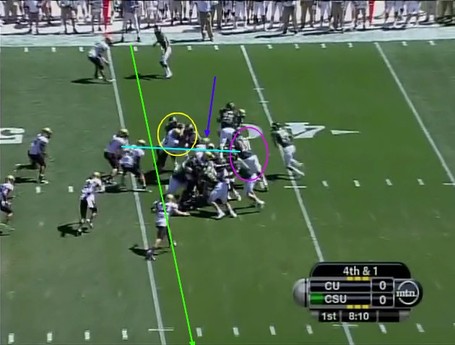 Note the green line, that is the line of scrimmage. Note where Colorado is playing and where Colorado State players are. The guys in green are well behind the line of scrimmage. First battle for control of the line of scrimmage is won by the Buffs. Second battle is the yellow circle highlighting Curtis Cunningham occupying two CSU blockers, not allowing them to get off their block to the second level of linebackers and safeties. Win #2 for the Buffs. The biggest win is Mr. Pericak. See that blue arrow pointing to the gold helmet? That is nose tackle #83 two yards deep in the CSU backfield. That is important because the CSU Ram guard circled in purple is supposed to be within a half yard of that green line denoting the line of scrimmage. Because of Pericak's quick step off the snap and penetration into the backfield, he moved the pile, making the offensive guard go around the trash in the middle. To do that, the CSU guard had to run backwards three yards behind the line of scrimmage. You can see now that the ball carrier is going to beat the lead blocker into the hole where two Colorado Buffaloes are waiting in LB Jon Major and S Anthony Perkins. 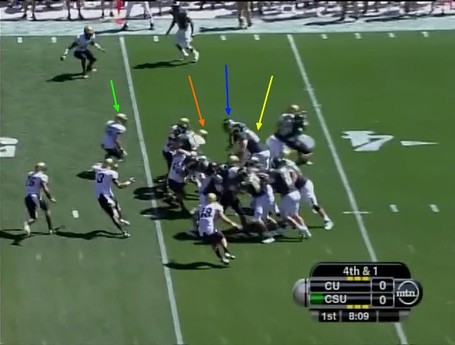 You can see above that the guard (yellow arrow) is behind the ball carrier (blue arrow) which is no good because Jon Major (orange) and Anthony Perkins (green) are there to make the stop.

Unbelievable job by Pericak and Cunningham getting penetration in the backfield and blowing up the slow moving play called by Colorado State. Excellent job by Perkins and Major to react and fill the hole, making the tackle. A very questionable call made even worse by great execution from the front seven of the Buffs.