Keys to the Game: Colorado Buffaloes vs. Colorado State Rams

Share All sharing options for: Keys to the Game: Colorado Buffaloes vs. Colorado State Rams 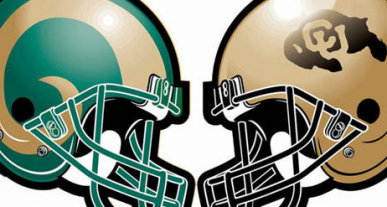 Time to Witness Dominance: Keys to the Game and Predictions...that was the title of this little blurb a year ago. I remember the day well and a year later, the first couple paragraphs still apply:

Most Colorado Buffalo fans have a few different feelings going through their system this morning. Excitement is surely one of them, anticipation to see the black and gold run out of that tunnel is most certainly there, but for me, the overwhelming feeling is that desire to bear witness of something that we haven't seen in the past.

It is time to bear witness to a team that can come out and dominate. Not necessarily dominant on the scoreboard with a forty point win but dominate physically, dominate by being the better coached team, dominate on special teams, dominate the halftime adjustments, dominate in preparation and dominate by being the more energized team. Basically, see a discernible difference over the team the Colorado State Rams put on the field today but also the Colorado teams that we have seen trot out the past three years.

Well, it is year five now and the need for dominance is still there. But today, the feeling is more of nervousness. Sure, there is plenty of excitement but I am sincerely nervous for today's game. Maybe it's because their is no reason what happened last year can't happen again. I think mostly it is my desire to see these Buff player's succeed. I believe that a win today will give this team a boost, get the confidence level up and could make them dangerous in 2010. On the flip side, I just can't imagine how demoralizing a loss would be. Like I said earlier this week, the team, in my opinion, is very fragile and needs something good to happen or this train could get out of control quick. Win today and maybe for one week they don't have to hear about Dan Hawkins' job status or how far Colorado football has fallen or all the bad things that are thrown at the program and then who knows what will happen. The switch might flip, it might become a different team than in year's past. That is my wish for the players, a win today and boost in confidence.

Keys to the game after the jump...

Fragile team, they need confidence. Simple as that. Best way to get some confidence. Score first. Last year, the Rams jumped out to a 14-0 before we even knew what hit us. CSU will enter this game relatively confident. They get LB Rickey Brewer back from a year ago, they beat the Buffs in 2009 so they feel like the know how to win this game. Colorado needs to prove early to Colorado State and themselves that this year's team is a different animal. And yes, it wouldn't hurt to make the Rams offense led by true freshman quarterback Pete Thomas and a new set of offensive linemen play from behind.

The lack of energy on last year's team has been well documented over the past 12 months by every source in Colorado. Players like Rodney Stewart even admitted a year ago that the team lacked energy on game day. Today, I look to the four captains as they must demand a change in the mental preparation of their teammates. That, in my mind, is their biggest job in 2010.

Win the Battle Up Front

No explanation needed. Everyone knows Colorado State is replacing many starters on the offensive line and everyone knows the Rams have a very solid front seven on defense. So in my mind it will be about Colorado's offensive line raising their level of play to manage linebackers Mychal Sisson and Brewer as well as the defensive line making an impact on Pete Thomas. Whoever wins the battle up front will win the game. Most of the time, that is a matter of "want to" and last year, Colorado State wanted it more than Colorado which led to a loss.

Bring the binoculars today and watch these three players on the first few snaps of the game - OG Ethan Adkins, C Keenan Stevens and RT David Bakhtiari. I think they will tell you if this offense is going to change from a year ago. Get solid play from these three guys, I start to like this offense a lot.

Yes, QB Tyler Hansen will be the starter today, now I am looking for him to take it and keep it. Hansen hopefully puts any lingering thoughts of a dual quarterback scheme to bed today and solidifies the position. Colorado football needs that from it's quarterback. They also need their quarterback to outplay true freshman Pete Thomas who will be suiting up the first time today in front of 70,000 people. Last year, Cody Hawkins didn't outplay Grant Stucker. This year, Tyler Hansen needs to outplay Pete Thomas for the Buffs to win.

The Buffs' special teams play has been horrid the last few years and to be honest with you, the only improvement may be in the return game. A field goal is never a sure thing so Colorado being effective in the redzone is a must in 2010. Protect the football and score seven.

Hit or Be Hit

Hit or be hit. Go Buffs, Beat the Rams.