It's Friday, so here's a picture of Toney Clemons, the Big-12 Newcomer of the Year. 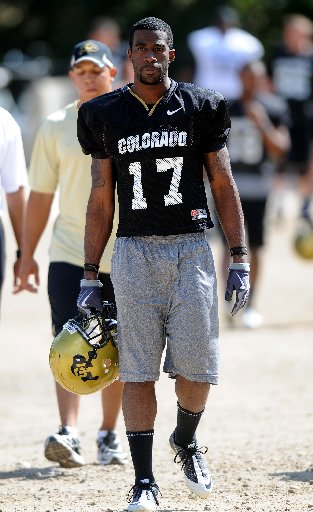 Picture from the Daily Camera

August 5 Practice Report from our own David Gerhardt - Ralphie Report - David has a helluva write up for the first [full] day of camp.  Check it out.

For a pad-less practice, it was nice and physical. One of the first things that the team did, was work on proper tackling technique, and I mean the WHOLE team. Even the kickers and punters worked on it. They spent most of this practice working on fundamentals.

CU's Hagan puts on 'kid gloves' - Buffzone - Teaching isn't just knowing your subject, it's knowing how to get the knowledge to where it counts; the student.

If Darian Hagan has learned anything in his five previous seasons as a college football coach, it is that a coach needs to be flexible in his approach and open-minded in dealing with players.

"I'm going to teach them like coach (Gary) Barnett taught me, and that was with kid gloves," Hagan said.

Wide receiver Travon Patterson was not able to participate in the first practice of Colorado fall camp on Thursday after his former school, Southern California, and the Pac-10 Conference raised questions about his transfer to CU... Pac-10 rules require student-athletes to sit out one season when transferring within the conference.

No Buffaloes for Buffs as camp opens - Buffzone - Apparently the Ralphie logos were removed from the sides of the helmets for Thursday's practice.

"You got to earn your Buff," Hawkins said. "That's part of it. I respect the heck out of this tradition and our guys do too. I just want them to earn it."

Every Big 12 team's most-painful loss - Big 12 Blog - ESPN - ESPN continues their themed article blitz, this time by conference.  The Buffs give as well as they get in terms of painful losses. 1989 Orange Bowl loss? Check.  5th Down Victory? Check.  That time in 1976 we beat the snot out of Oklahoma State to rob them of the Big 8 title?  OK, sure! - No 62-36 though.

Our strength coach says it was the best offseason since he was hired.  Also, the Buffs go to the Crossroads (and have a guitar duel with Steve Vai??)   All that and more after the Jump...

Crossroads ahead for CU Buffs football - Buffzone - It's a sloppy write-up, but it makes good points.

[Of Hawkins] That`s a 16-33 record in four seasons. The last CU head coach to have that kind of record after four seasons? Some guy named McCartney, who entered his fifth season with a career mark of 14-30-1 and one bowl game to his credit.

Opening camp: Colorado - Big 12 Blog - ESPN - The camp preview for us is generic, but it's here for new quotes from Hawkins:

"Let's look at this thing from an objective standpoint of what's really affected the wins and losses. Can we clean this up? Can we be responsible for this? So for our team, that's been the whole focus."

San Jose State, Oregon State and BYU are among those whose lineup reads a like a horror novel; Nebraska, Oregon and Boise State have a chance to make the most of a favorable schedule.

[Colorado. Dan Hawkins, meet your schedule-maker. Hawkins somehow earned another year in Boulder only to face this: Colorado State (in Denver), at California, Georgia, at Missouri, at Oklahoma, at Nebraska