This post is sponsored by Labatt Blue Light, who invites you to visit RefreshmentDuo.com, where you can enter to win a ticket for you and a friend to attend a massive concert and party with the Refreshment Duo and Blue Light girls.

When Labatt Blue Light asked to sponsor a post about a pair of Buffs who stand out as magnificently as the Blue Light Refreshment Duo, we didn't have to think very long about who would make for appropriate honorees: Alec Burks and Cory Higgins.

Ask a random sports fan on the street for the most memorable duo from the Buffaloes is and odds are, 90% of the answers will look something like this:

Kordell and Westbrook not withstanding, there is a new duo that is poised to leave their mark on the University of Colorado in the 2010 basketball season and return the Buffaloes to the NCAA tournament for only the third time since 1969.

For the second year in a row, Cory Higgins was named Third Team All Big 12. Higgins, who finally received some help this year from Burks and Marcus Relphorde, led the Buffs in scoring with 19.0 per game which ranks him third in the conference overall. He was also exceptional from the free throw line shooting 83.2%. In one of the deepest conferences in the nation, being named third team on a squad that finished eighth in the league is a great accomplishment.

Alec Burks was fantastic in his first year at Colorado, leading all Big 12 freshmen in scoring with 16.8 per game and seventh overall in the conference. He also led the conference in field goal shooting percentage, shooting 53.6% from the field. His scoring and field goal percentage numbers were fourth nationally among all freshmen according to Big12sports.com. One of the more amazing accomplishments this year was certainly Burks' efficiency. Rarely did Burks force and take bad shots, clearly shown by his top ranked field goal percentage. He is wise beyond his years.

Burks scored in double digits every game this year except one, a game against Iowa State where he left injured in the opening minutes of the game. He also led the team in rebounds per game as a guard. Against Texas Tech, the freshman capped off a great regular season with 24 points on 8 of 12 from the field, nine rebounds, three assists and two steals.

If these two can continue on their current trajectory and take the CU Men back to the Big Dance, they will be the best duo to come through Boulder in a long time, and will cement their legacies as two of the men responsible for the turn around of the Buffaloes basketball program. 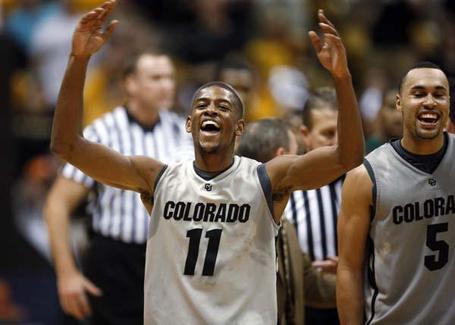