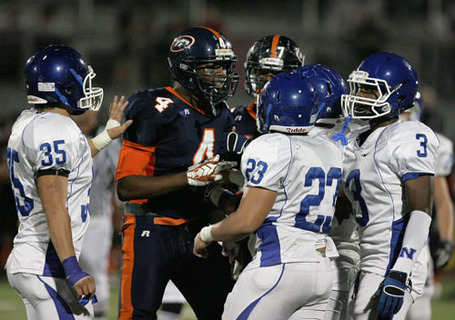 Commentary:  He projects as either a wide receiver or tight end at the next level and has great size to do some things at the next level. Mobley's final two schools came down to the Buffs and Nevada. Mobley had interest from UCLA and Oregon as well as an offer from Nebraska. He also visited Nebraska. There is some concern about Mobley's academic standing and his ability to qualify for the University of Colorado. He visited Colorado on October 31st for the Missouri game.  Mobley has some good bloodlines as well, related to former Denver Broncos LB John Mobley and he has great versatility to play multiple positions. He also had good things to say about Colorado, but that was also in May:

Mobley is versatile, having played quarterback, receiver, tight end, linebacker, defensive end, punter and long snapper. No word on whether he diagrams plays or sings the National Anthem, as well.

He told the Web site he envisions himself catching passes in college.

"The big thing is that there were 15 colleges that came by our school," Mobley told rivals. "I talked to just about every one of them. I really liked the Colorado guys."

ESPN says this about him:

Mobley is a physically-impressive football player who is a dominant figure on the gridiron. Built more like a tight end than wide receiver, he shows exceptional quickness and athleticism.

The term "athlete" describes Mobley well as last week he was inserted as a quarterback and excelled:

Many colleges are coveting Harold Mobley for his ability to catch the football. Thursday, Mobley proved he is quite adept at delivering the passes, too. Making his first start at quarterback this season, Mobley tossed four touchdown passes and rushed for two more scores as Eastvale Roosevelt routed Riverside Poly, 46-10, in a Big VIII League game at Riverside King.

"Harold is a tremendous athlete," Mustangs coach Bill Stacy said. "You could plug him in at running back, defensive end or linebacker and expect good things."

Stacy asked Mobley to step in under center for this game, replacing sophomore Aaron Crone, who struggled in recent weeks. Mobley rewarded his coach's decision, completing 8 of 12 passes for 254 yards. He also rushed for 81 yards on 11 carries.

"I was excited to get the chance," Mobley said. "I was confident the line would hold them back and give me the time I needed."

Austin Hill did much of the work on Roosevelt's first scoring play. Mobley tossed a screen pass, and Hill weaved his way downfield for a 56-yard touchdown. Riverside Poly (3-4, 1-3 in league) took a 10-6 lead when quarterback Matt Okey scored from 6 yards out. Mobley's second touchdown of the night was his most impressive. Standing flat-footed and about to be hit, Mobley hurled the ball into the end zone, finding Tyler Slavin for another 56-yard touchdown.

"People around school know I can throw the ball around 70 yards," Mobley said. "I just decided to huck that one as far as I could."

From his scout.com bio:

Mobley: "I’m hard to bring down. I can get yards after the catch. I have good balance and strength and I always find a way to stay up.

"I want to improve my speed and route running. Speed is something you always want more of and I’d like to get more open."

Here is a little video of a big time hit Mobley had earlier in the year.