The Buffs are filling up their remaining open spots for the 2010 recruiting class this weekend. After receiving a verbal commitment from FB Justin Torres earlier, Colorado also received three other commitments today. The Buffs now have 20 commitments for the 2010 class, one commitment of a 2010 prospect who will greyshirt until 2011 and a preferred walkon.

Commentary - With the departure of Demetrius Sumler, Colorado needed a power running back. Earlier today, the Buffs landed Justin Torres, a 6'1" 230 pound fullback/running back to help fill the void. The signing of Cordary Clark might be another option for the missing power running game in Boulder. Cordary Clark is a big running back with good size and excellent toughness when running the ball. Clark played beside fellow high school running back Deon Hill, who is headed to Georgia Tech. Clark is one of eleven Central-Phenix players who are expected to sign letter of intents to play football in college next year. Hill and Clark together led Central to average over 280 yards rushing a game. Clark earned all-conference honors in 2009 as he rushed for 817 yards and 14 touchdowns. This article does a good job explaining a little bit about Cordary:

Deon’s teammate, Cordary Clark-Allen, is a superb football player in his own right. Cordary shares the backfield with Deon; Cordary plays fullback in the Red Devils’ attack. He’s a big, punishing back who is a nice complement to the more refined running style of his teammate. Cordary stands 6’2" and weighs 220. He’s a disciplined football player who knows his assignments and how to execute. And when he gets the ball, which happens around 18 times per game, he knows exactly what to do with it.

Cordary’s biggest game came against Enterprise in the second game of the season. It was a big region contest, and Cordary rushed for over 100 yards and scored three touchdowns in the 41-21 victory.

Cordary’s work ethic, size, speed and willingness to do whatever his team needs has attracted the attention of several colleges. He’s had interest from Alabama State, Troy, Georgia Tech and Middle Tennessee. He’s biding his time before making a decision, but he knows he will play college football in the future. It’s always been a goal of his, one that he realized he could achieve when he was in the tenth grade — his first year as a starter for Central. "I had the size to start as a sophomore. I played pretty well, and the coaches started telling me they thought I could play in college. That motivated me to work even harder," he says.

Getting into college won’t be a problem once he decides where it is he would like to go. Cordary is an A/B student, and he would like to study psychology or sports medicine when he goes to college. He’s taken the ACT and is college eligible. That always makes things much easier during the recruiting process. 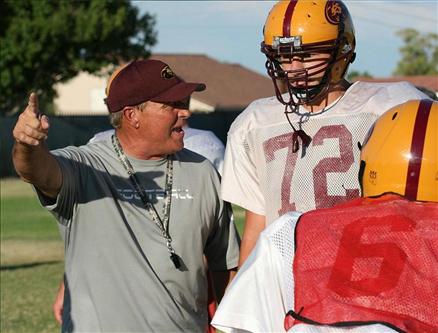 Commentary: Alex Lewis is a very young senior at 17 years old and will more than likely greyshirt in 2010 to gain some weight before heading to Boulder, which is good news for the offensive line depth and the development of players. Greyshirting means Lewis will come to Colorado in 2011 and still be eligible to redshirt and play four years. Currently, Colorado has eight junior offensive linemen so after the 2011 season, the Buffs will lose eight players in the trenches. Six of those juniors have started on the offensive line in their career. Lewis is expected to continue to grow height wise and will certainly need to add weight to be successful at the next level. Lewis is the son of former Arizona Cardinal offensive lineman Bill Lewis. Lewis was named 5AI Conference All State in 2009 according to the Arizona High School Football Coaches Association. He was also named First Team in the East Valley region of Arizona.

Lewis has good height but may lack the bulk and athletic ability to play offensive tackle. We feel his best position at the college level would be guard. It will take time to develop his skills and size. Not quick out of stance but displays the ability to bend at the knees.

Commentary - Heath Davis has accepted a preferred walk-on spot from the Colorado Buffaloes. The 6'0" receiver from Colorado tore his ACL in third game of his senior season. He was receiving interest from many schools before that injury occurred. Davis was the only returning starter on his high school team in 2009. In 2008, Davis caught 17 passes for 280 yards and five scores.

Welcome to all the new Buffs!