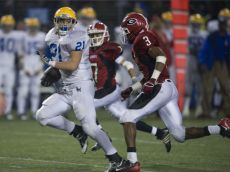 Commentary: Colorado received it's 19th verbal today, according to the Scout.com player page in RB/FB Justin Torres from La Mirada, California. Torres was coached in high school by former Buff quarterback Mike Moschetti. At La Mirada High, Justin was named Suburban League MVP and CIF Division Player of the Year. Had 104 carries for 827 yards and 16 touchdowns as a senior. He also played defense, totaling 79 tackles.

Justin was the best player on the La Mirada team who was the champion of the C.I.F. Southern Section in 2009. As you can see from the video below, Torres is a big kid who runs with some anger. The Buffs could use a fullback/H-back and Torres fits that mold. Colorado graduated their only FB on last year's roster in Jake Behrens. Torres shows some good wheels and knows how to hit the hole.

Torres' only known offer was from the University of Colorado. Welcome to the Buffs!