Cliche statement: In football, injuries are a part of the game, you need to have the depth to survive.

Well, that blanket statement doesn't apply to the Buffs as they lost about 120 player games to injury in 2008 made up of starters and important reserves like TE Riar Geer, OL Ryan Miller, OL Max Tuioti-Mariner, RB Darrell Scott, DE Jason Brace, DB Daniel Dykes and DB Ryan Walters just to name a few. And as for th 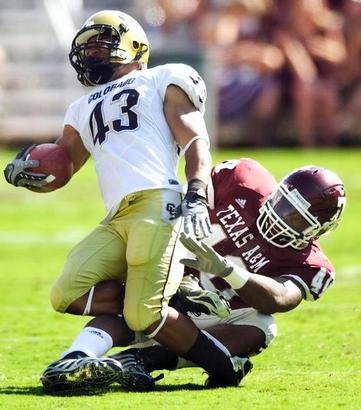 at depth part of the statement, in most cases it consisted of first or second year players who weren't ready physically, mentally or experience wise. It was a perfect storm. Still, it is a tough subject for Buffalo fans (I know it gets me a little irked) as it led to another excuse from winning enough games to qualify for a bowl and enough to formulate an excuse/reason to go winless on the road and enough to still have questions coming into 2009.

Offseason surgeries, recovering from ACL injuries last year and a new injury to OG Max Tuioti-Mariner will have an impact on spring practices. The 2009 spring session definitely has a stronger sense of importance than in prior years because the Buffs are, once again, trying to learn a new offense, replace 3/4 of a defensive line and still develop young talent. There is also a heightened sense of pressure this year on the Hawkins regime to produce on the field results. No, that's not the blog world putting false goals on this team. To Dan Hawkins credit, he realizes it with his statement that he believes the Buffs can win 10 games. Yes, it was not a guarantee, but you don't make a statement like that, four victories over any total he has produced yet, if you don't realize that their is an anxious feeling around the program. But a big key to fulfilling his statement and getting to the eight win mark (we would settle on that, Dan) are keeping injuries to a minimum this year as well as praying for a full recovery for last year's walking wounded. When you lose starters like CU did last year, you always have to worry about how they will return to form.

Here is the list of players (please switch your view to wide in the top left hand side of the blog to see the chart correctly) that had injuries in 2008 or in the offseason and their status this spring. I have added production numbers from last year. (source: Dave Plati and the Sports Information Department):

20 players! Almost one fourth of the team is on this list and when you have a fourth of the team mentioned, there are going to be many players that played a big part or were expected to play a big part in last year's team as well as the 2009 team. So the million dollar question is how will each of these players recover and perform coming off of some pretty serious injuries? The tough news is that only eight of the wounded will be full go come spring practice so getting a gauge on most of the lot will not happen until fall ball.

Still, three players catch my eye as guys that will receive a ton of attention this spring and will have the most questions surrounding their performance: starting RT Ryan Miller, starting RB Rodney Stewart and potential star WR Markques Simas. All three will be in "full go" mode and all three might be the best player in their respective offensive units.

Ryan Miller's injury in 2008 was one of the last major setbacks this team had but it was a big one. His injury coincided with MTM's and left two offensive line starters out for the year. Miller, thought o f as a potential first round NFL draft pick, will be critiqued on his feet and his ability to maintain his athleticism, something that was a point of needed improvement to go along with his 6'7" frame.

As for RB Speedy Stewart, their is nothing you can hope for except a full recovery. Already a fan favorite for his diminutive size but amazing production as a true freshman, Speedy was one of the only playmakers on the 2008 team before breaking his leg in the Texas A&M game. He is a lunch pail guy who outworked other running backs to get on the field. He figures to play a big part in the 2009 season as the Buffs seem to be switching the offense to feature Stewart, Darrell Scott, Demetrius Sumler and Brian Lockridge in the offense.

Now to WR Markques Simas. It isn't so much about the injury with Simas but his eligibility and off the field focus. Boy, are we really going to depend on him and hopefully we don't get let down. The news out of Buff camp is that he has matured and dedicated himself to his academics. No one is questioning his football skills but we will have to wait and see if he can juggle both starting on a Division One football team as well as maintain his grades. if he does, Simas instantly becomes the most talented wideout on the team and hopefully with fulfill that void in the playmaker role. Plus he will be Hawkins/Hansen/Ballenger/Evans' new best friend.

As I said before, this week's injury to Max Tuioti-Mariner was very disheartening. It was MTM's third ACL tear and is another offseason injury that has plagued the Buffs during "non contact drills." What is even more troubling is why Tuioti-Mariner was even out there doing this sort of work coming off two ACL injuries when he was supposed to be limited in spring ball. You wonder now if MTM will ever be the same. Not many people recover 100% from one ACL injury, let alone three at 300 pounds. That is a lot of stress on those knees.

There is no doubt in my mind, the first week of news reports will be about how players are recovering from injury and how injury has kept players like MTM, Ray Polk, Blake Behrens, Devin Head, Jalil Brown, Jon Major and others from being able to go at full speed.