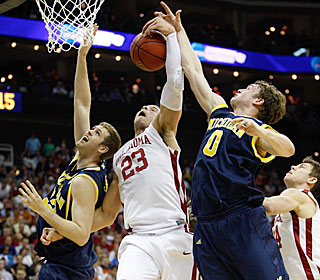 Opening weekend of the NCAA Tourney is arguably the greatest sports spectacle in the history of mankind. Four days straight of brackets, upsets, buzzer beaters and the dream that every year you know something everyone else doesn’t. You wink at coworkers in the office pool. Talk some noise to your boys through emails. Research your picks and delay until the last second when you will finally unveil your bracket on the unsuspecting hordes that are clamoring for 2nd place and little pearls of wisdom you see fit to drop from time to time.

Then Monday comes around and the Sweet 16 is finally set. Bracket? Decimated. Dreams? Dashed. And the excuses come a flyin’: "Man, I really didn’t have time to research my picks this year…" or "Well, it’s easy when you just pick straight chalk!" Aghhh, the joys of March Madness. On the other hand, you could be one of those guys that fill out multiple brackets… to which I have nothing to say.

Even though I won’t be raking in any major green, due to my apparent lack of bracket wizardry, I’ll be watching just as intently come next Thursday.

Big 12 fans have to feel pretty good about the opening weekend showing. The top 3 teams (KU, OU and Mizzou) advanced, looked strong and repped the conference well. With the exception of the Big East, which is ridiculous BTW, the Big 12 had the 2nd best showing of the major conferences. Let’s not also forget the two near misses by Okie Lite and the Hornage that were both close to taking down the top-seeded Pitt Panthers and Dickie V’s beloved Dukies… "baby."

While I’m on that thought, what do you think of CBS’ coverage? Does anyone else find it a little more than annoying that this network has carte blanche on all the games? Case in point yesterday afternoon when several games  were coming down to the wire and the CBS programmer decided he’d take a little afternoon siesta. Instead of watching two games that were in the final minute, we were treated to watching Louisville, a game that still had around seven minutes on the clock at the time. I felt like I was handcuffed to the couch at someone’s house that lacked the knowledge of the "flashback" button and was a slave to their poor remote instincts.

Back to my original point, love him or hate him, Dickie V IS college b-ball. Instead of listening to him go horse in the first two minutes, scream about his "Dipa Dandies," and counting how many times he yells, "Are You Serious?!" etc. we’re stuck with Bill Raftery…ugh. Maybe it’s just me but this guy makes me dive for the mute button. Has anyone noticed he has an entirely separate voice that he uses for big plays, dunks, etc.? Or he’ll save it up for a replay right before the break, half the time I can’t even understand what he’s saying. I almost feel like they should have a closed caption scroll across the bottom of the screen to translate him when he does his "Big Play" voice. Actually scratch that, I don’t really care what he’s saying, just give me some more Dickie V!

OU (2) vs. Syracuse (3): First impression of this game is: Which team will run out of gas first? The Orangemen had trouble with production off the bench against the Sun Devils, as did the Sooners. Matter of fact, OU’s bench scored virtually no points to beat Michigan. The Sooner starters will have to log in heavy minutes again, but could this be the time the marathon Big East Tourney finally catches up with Syracuse? Hard one to predict, but if OU can get the Orangemen in foul trouble early, ala Meeshigan, try and contain red hot Jonny Flynn and have Blake Griffin put on another Herculean performance; the Sooners could be tangoing into the Elite 8.

Mizzou (3) vs. Memphis (2): This, IMHO, is the toughest matchup for the three remaining Big 12 reps. Mizzou will have to continue to ride Leo Lyon’s hot hand and hope he is still stroking it after averaging 20.5ppg in the first two rounds. Calipari’s running Tigers are going to be out to prove they shoulda been a top seed yet again, whilst playing the "we're disrespected" card that gets so tired in sports today. Thanks to an opening round wake-up call from Cal State-Northridge, the Tigers (the Mizzou variety that is) will have their hands full in the b-ball track meet that is Memphis basketball.

Kansas (3) vs. Michigan State (2): Finally, this classic matchup of two of college b-ball’s heavyweight programs and coaches will be interesting. Izzo's boys will be primed, there's no doubt, considering he's one of the better Tourney coaches you'll find. Bill Self will ride the Cole Aldrich train and hope that his white hot big man can continue to punk guys in the middle. Pepper in some scoring from Sherron Collins and wake up Brady Morningstar and the young Jayhawks could take down le Sparty.